Lone Wolf Meets a Lady, The

Sony Pictures Choice Collection // Unrated // April 3, 2012 // Region 0
List Price: $20.95 [Buy now and save at Amazon]
Review by Stuart Galbraith IV | posted May 23, 2012 | E-mail the Author
Novelist Louis Joseph Vance's character Michael Lanyard, aka the "Lone Wolf," a suave jewel thief turned private eye, had been adapted for the screen as early as 1917, and silent-era Lone Wolf movies included a series of late-1920s features starring Bert Lytell. But the better-remembered Lone Wolf movies began in 1935, when Melvyn Douglas played him in The Lone Wolf Returns. Francis Lederer was next, in The Lone Wolf in Paris (1938), but it really became an ongoing series once actor Warren William came aboard. He starred in nine Lone Wolf movies, before illness forced him to turn the part over to Gerald Mohr (after a three-year gap) and, finally, Ron Randell, in the last Lone Wolf movie to date, The Lone Wolf and His Lady (1949).

In another one of those baffling marketing decisions, Sony Pictures' Choice Collection is reintroducing Lone Wolf to audiences with an entertaining but rather average entry from the middle of the series' run, 1940's The Lone Wolf Meets a Lady, rather than a more obvious starting point, either Melvyn Douglas's single entry, widely considered the best of the bunch, or The Lone Wolf Spy Hunt (1939), the first of the Warren William films.

Further, Sony is stubbornly sticking to its guns with its one movie/one DVD policy, releasing The Lone Wolf Meets a Lady as a single DVD. That's $20.95 (SRP) for just one 71-minute movie, while at the same time website partner Warner Bros. presently markets the same kinds of movies for a lot less money, such as its five-film George Sanders Saint Movies Collection which retails for a more reasonable $29.95.

In its defense, this manufactured-on-demand title, under Sony's "Choice Collection" label, looks absolutely fantastic, with a singularly gorgeous black & white transfer. Since it began its MOD program, Sony consistently beats MGM, Universal, and even Warner Bros. as far as video transfers go, and The Lone Wolf Meets a Lady is no exception 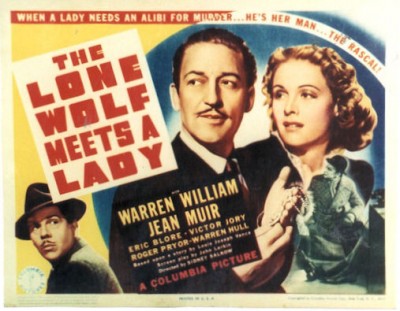 Joan Bradley (Jean Muir) is about to be married to millionaire Bob Penyon (Warren Hull) when ex-husband Peter (Roger Pryor) turns up. Shortly after his arrival he's murdered (while Joan is in an adjacent room) and the priceless diamond necklace given Joan for her wedding is stolen.

Joan flees the scene of the crime, and is nearly run over by Michael Lanyard (Warren William), aka The Lone Wolf, and his valet, Jamison (Eric Blore), who are on their way to a winter resort. The three are taken into custody by a motorcycle cop (Bruce Bennett) but Lanyard gives him the slip and soon becomes intrigued by Joan's story.

Lanyard provides Joan with an alibi, but the police, led by Inspector M.J. Crane (Thurston Hall) and Detective Dickens (Fred Kelsey), discover a key that implicates Joan in the murder. Bob and Joan sneak out a back window, while Lanyard and Jamison fall under suspicion for the theft. Meanwhile, the real mastermind behind the robbery if not the murder, Clay Beaudine (Victor Jory), being without the diamonds either, theorizes that they may be in Lanyard's possession.

The Lone Wolf Meets a Lady was produced near the prolific height of B-mystery movie production, when crime-solvers like Charlie Chan, Sherlock Holmes, Michael Shayne and many others supported A-features and audiences were drawn to these films in a manner similar to how audiences have been drawn to the recent glut of TV shows like CSI and Law & Order (and their many spin-offs).

The Lone Wolf was part of a sub-genre within the genre, of Raffles-like gentleman thieves coming to the aid of damsels in distress while the police, typically clueless flatfoots, would chase after him. The Saint movies (1938-43), most starring George Sanders, are probably the best known of these. Sanders left the series to star as The Falcon, in a similar series of films (1941-1949), though after just four entries his real-life actor-brother, Tom Conway, replaced him.

Warren William had himself appeared in a crime-solving series for Warner Bros., being the first actor ever to play the role of Perry Mason, though that series was notably inferior to the later TV series with Raymond Burr. William is remembered today more for his starring roles in racy pre-Code films of the early and mid-1930s, including Three on a Match (1932), Gold Diggers of 1933, Lady for a Day (both 1933), Cleopatra, and Imitation of Life (both 1934). He also played the Sam Spade character in Satan Met a Lady (1936), the second and by far worst film version of The Maltese Falcon, though it wasn't William's fault.

In The Lone Wolf Meets a Lady William exhibits a kind of slightly faded, world-weary glamour that suits his character nicely. Eric Blore, perennial movie butler who must have bumped into Arthur Treacher a lot at auditions, had appeared in most of the Astaire/Rogers musicals at RKO, and soon after this memorably in Preston Sturges's The Lady Eve (1941). The Lone Wolf movies, made at lowly Columbia, for Blore must have felt like a day-job, and he's much hammier in this than in his A-pictures.

Besides reliable aforementioned talent like Jory, Hall, and Bennett, the film's cast includes an uncredited part for original "third Stooge" Shemp Howard, as a friendly pickpocket coincidentally named Joe. (After Shemp's death, the Three Stooges would replace him with two Joes, Besser and DeRita.)

The film offers Fred Kelsey, who also appeared in Three Stooges shorts, an unusually choice role as Detective Dickens. The prolific bit player was part of that highly-specialized class of character actors. In Kelsey's case almost invariably he'd turn up as a hotel dick or some other flat-footed detective, just as Donald Kerr always played cabbies and newspaper reporters, while Jack Norton and Arthur Housman were Hollywood's favorite drunks. Kelsey's best part was probably as the growling, scowling detective in The Laurel-Hardy Murder Case (1930), in which Kelsey was especially funny, but usually his parts were small, often just a line or two, so it's almost strange to see him in a sustained, major supporting role. This reviewer has a great fondness for actors like Kelsey; he's been my avatar for the last several years in fact.

The Lone Wolf Meets a Lady is breezy fun but unexceptional. The mystery aspects are slightly better than most such films, and the cast is above average for this kind of thing, but nothing about it particularly stands out.

The video transfer is another story. Presented on a region-free DVD-R, The Lone Wolf Meets a Lady gets an extremely impressive full frame transfer noteworthy for its sharpness, rich blacks and good contrast. The mono audio, English only with no subtitle options (or even a menu screen; the movie automatically starts and restarts without one), is likewise fine. No Extra Features.

The Lone Wolf Meets a Lady is a fun picture, and I'd like to see Columbia's entire Lone Wolf series in chronological order, and preferably in a boxed set or two rather than as pricey individual DVDs. The great transfer almost makes up for this, however, and overall is Recommended.