The story of the Tuskegee Airmen is one that has been told and retold several times through the years, mostly on television but occasionally in movies. The story itself is memorable and deserves to be dramatically interpreted, but the problem is said reinterpretations have been received to varying degrees of praise. Then there is Red Tails, a good enough story that George Lucas himself decided to be Executive Producer for it, but it would not be the first time he was attached to something that was subpar, would it?

Based on a book from John B. Holway, Aaron McGruder (The Boondocks) and John Ridley (Undercover Brother) adapted it into a screenplay which Anthony Hemingway (in his feature film debut after directing on several television shows) directed. For those unfamiliar with the story in general, a group of African American pilots who graduated from the Tuskegee Institute's training program were given the opportunity to fly for the United States in World War II. However, their missions were primarily focused on harmless, unguarded targets, perhaps in part because the Pentagon felt they did not have the skills to fly more advanced missions to escort bombers. At the urging of the Airmen's Pentagon liaison Colonel Bullard (Terrence Howard, Hustle and Flow), they get what they have been yearning for, and the squadron's commanding officer, Major Stance (Cuba Gooding Jr., Jerry Maguire) rounds up the pilots and gets them ready for what easily is their toughest combat challenge yet.

As for the pilots, each has their own personal eccentricities that they bring to the unit. The squad leader, whose callsign is Easy (Nate Parker, The Great Debaters) is neck and neck when it comes to being the most accomplished member of the group, though he tends to be a little more reserved. The more outgoing pilot on par with Easy is Lightning (David Oyelowo, The Help), who is a little more rambunctious and even has a girlfriend in the Italian town near where the squad is stationed. You also have Junior (Tristan Wilds, The Wire) and Joker (Elijah Kelly, Hairspray) rounding the group out. 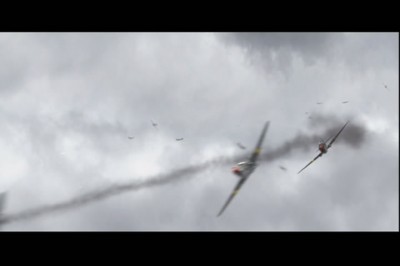 The group gets along well together, whether it is battling a literal battle-scarred Nazi pilot who serves as the face of the Third Reich, or whether they are battling forces on their own turf, whether it is in Italy or at the Pentagon, where a racist officer (Bryan Cranston, Breaking Bad) fits the bill. But Cranston is one of several different plot devices the story employs to make you buy into the journey the pilots take, along with their stereotypical personal demons, be it drinking, philandering or the like. And that is the big problem with the story, the characters are hardly memorable. We come into the film with them possessing a certain amount of justifiable swagger being part of the military yet getting sore from bumping their head on the ceiling, but the characters are constructed lazily and without care, almost as if this is Top Gun for the World War II sect.

There is no denying the dogfights are breathtaking and even provide some investment into characters one might not care about otherwise, but their time on the ground is about as prolonged and meaningless as the time in the air is exciting, and over the course of these two hours, drags the film down tremendously, to say nothing for its predecessors. Take the HBO film The Tuskegee Airmen, which was emotional, uplifting and hit just the right notes. And casting wise the ensemble of that one shows the one in Red Tails how to do work, simply put. You get the journey, you get the flights, you get the emotional payoff. You also get Cuba Gooding Jr., in case you are so inclined. 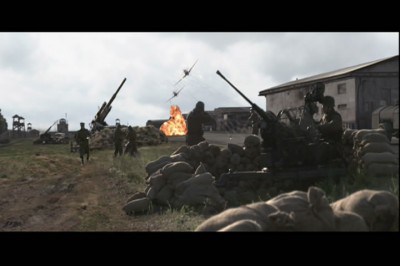 I understand and appreciate the intentions with which Red Tails tries to tell the story of the Tuskegee Airmen, and the air battles are worth checking out because they are amazing visually. But once you get past the battles, you are left with a story that treads water and if you are even the tiniest bit familiar with the Airmen's story, one that almost goes by the numbers that other films before it have done. Sometimes, in the case of this one, the first cut (the HBO film) is the deepest.


Fox gives Red Tails an AVC-encoded 2.40:1 high-definition presentation which looks quite good. Lots of wide sweeping shots of the airbase brings out a lot of detail in the image, but there is also image detail in the foreground that looks impressive as well. With Lucasfilm being involved in the visual effects, the dogfights are breathtakingly sharp and lifelike, and you can make out the red on the planes vividly in the sky. In less hectic scenes the facial pores and threads on Army uniforms can be made out nicely also. Very few people would kick this disc out of bed for eating crackers, if you get what I'm saying.


Not surprising to have a DTS-HD Master Audio soundtrack for Red Tails, and again with Lucasfilm involved, expect to have your socks rocked. The big takeaway I got from the film was that with all of the sonic action, the soundtrack delivers precisely and efficiently. Dogfights are as immersive as expected, with bullet hits and planes whizzing past and around you on all channels, and for those who fall in battle, the subwoofer meets them to give crashing planes a low-end emphasis in their impact. In quieter scenes the dialogue sounds clearly and in 'louder' scenes like a barfight they are transmitted clearly and without concern. About as perfect a soundtrack as I've heard on Blu-ray so far this year.


The big piece on the package is "Double Victory: The Tuskegee Airmen at War," a hour-long (well, 1:05:47) look at the real=life airmen with recollections by them. Narrated by Gooding, the historical context of the airmen and their impact on the war is recalled, along with the origins of the squadron. Things from recruitment to training is talked about, and the racism they encountered while in training and abroad is touched upon frankly. There are fond recollections of their military advocates by the survivors, and there are loads of pictures and film to help show the meaning and importance of their presence. The successes and flight strategies are recounted, along with the missions themselves. This type of context and candor would have been nice to have in the film itself, but this documentary will handle that and then some. 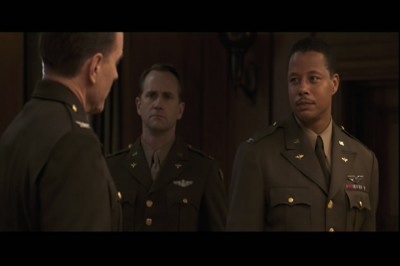 The other extras are pretty boring. Separate focus segments on Lucas (3:26), Hemingway (5:30) and composer Terence Blanchard (6:15) discuss their individual motivations in the film and in the case of Hemingway and Blanchard, working with Lucas and any sort of hurdles that required clearing. "Movie Magic" (5:12) examines the ample visual effects in the movie with the European studios that handled the tasks, and specific scenes are recounted too. "The Cast of Red Tails" (25:11) is basically the same as the tribute pieces, except with individual looks at the main and supporting cast, which includes their thoughts on the story and director, along with Lucas of course. They also share what they wanted to accomplish in the film. There is a second disc that houses a standard definition copy of the film (where the pictures come from), along with a 'highlights only' version of the "Double Victory" featurette.


Red Tails has the right thoughts in mind, they just don't articulate them well, and expect you to be dazzled by the visual effects (which admittedly are pretty good, but still). Technically the disc is amazing and from a bonus material perspective, the "Double Victory" piece accomplishes what the film does not. If you are looking for a mix of a good demo disc and bonus material then this actually turns out to be a decent value, but I'm personally skipping it because better titles in either category are available.