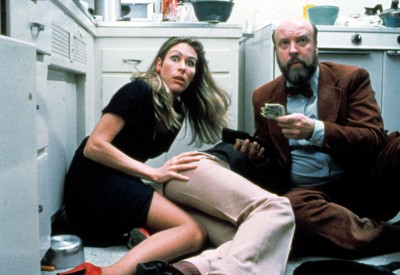 I remember the print ads for Eating Raoul from when I was a kid. Even in black-and-white in the newspaper, the big lips seemed somehow dirty to me. I really don't know where or how it would have landed on my radar as such, maybe the ad copy made that clear, I just knew this film was somehow subversive. It never came up in my family's discussions about what movie we were going to go see, and we went to just about everything. Just not Eating Raoul. This avoidance carried over into the cable years, when it seemed to be scheduled fairly regularly on Cinemax.

So here it is some 30 years later and Paul Bartel's cult comedy has come to the Criterion Collection and I am seeing Eating Raoul at last. My curiosity was definitely high. When Paul Bartel, who also co-writes and stars in the picture, died in 2000, the praise for his work was effusive. Sometimes it just takes the rest of us some time to catch up.

Though, now that I've seen Eating Raoul, I'm not entirely sure what it was that garnered that praise. What was subversive in the Reagan era, I have to admit, now just seems quaint. For a black comedy about sex and murder, Eating Raoul is shockingly tame. 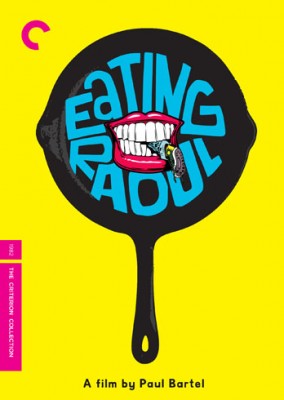 Bartel plays Paul Bland, a snobbish wine connoisseur with sexual repression issues. His wife Mary (Mary Woronov, a former member of Warhol's Factory) is a nurse who attracts all kinds of unwanted attention. She gets groped by horny patients and skeevy bankers alike (the latter is a nice cameo part for Buck Henry). The Blands want to open up their own restaurant out of the city and get away from the perverts of the sexual revolution that they find so loathsome. As fate would have it, the swingers they hate so much turn out to be their solution to their money woes. When one breaks into their apartment and attacks Mary, Paul kills him with a frying pan. The dead man is carrying a lot of cash in his wallet. If they can attract more of his kind, maybe the Blands could get enough for their down payment.

The pair place an ad in the local rag advertising themselves as s&m masters, all part of a plan to lure the would-be clients to their apartment, bonk them on the head with the pan, and take their money. When another crook, a thief named Raoul (Robert Beltran, Star Trek: Voyager), stumbles onto their scheme, he offers the Blands a deal: they provide the patsies, and he will dispose of their bodies and their possessions (clothes, cars, etc.), and they'll split the extra cash he makes. This works out pretty good at first, until Raoul's charms, aided by some premium marijuana, lure Mary over to the dark side the married couple so disdain.

Eating Raoul is an intentionally scandalous send-up of social mores, with its sites aimed clearly on the opposite sides of the sexual divide. Bartel and co-writer Richard Blackburn (Lemora) parody both the squares and the swingers with equal venom. The Blands are uptight snobs who are living in denial, while the party animals they slay are twisted and deluded. The net the writers throw over their comedic prey encompasses not just sexual hang-ups, but also how race and class informs the Blands' drive to get what they think is coming to them. In terms of satire, Eating Raoul has the most in common with the John Waters school of comedy. Bartel and Blackburn sprinkle their script with slang for outrageous sex acts, and they invent increasingly elaborate role-play scenarios for Paul and Mary's victims. One is a Nazi, another likes Minnie Mouse, etc.

What Bartel's film lacks, however, is Waters' gleeful reveling in all things nasty and outrageous. Eating Raoul is missing the quintessential tackiness and the anything-goes abandon that have allowed movies like Pink Flamingos and Female Trouble to maintain their edginess. Hell, even minor John Waters flicks like A Dirty Shame does the icky sex stuff better. Seeing that sex-crazed comedy had me running Urban Dictionary in overtime just trying to sort out everything referenced in the script. (Can anyone say, "upper decker"?) Maybe Eating Raoul really blew their hair back when the dweebs and the norms watched it back in 1982, but it just seems silly now. The music is outdated, the costumes and sets look cheap, and the big punchline that Bartel is building to...well, I hate to tell you, but the spoilers couldn't be more out in front of this one unless Bartel turned his title into a complete sentence.

I guess it was still kind of neat to see what all the fuss was about after all this time, but if you don't have the same nostalgic connection to Eating Raoul as I do, you might wonder if it's called a "cult movie" because once upon a time audiences were brainwashed into thinking that Eating Raoul was so outlandish. 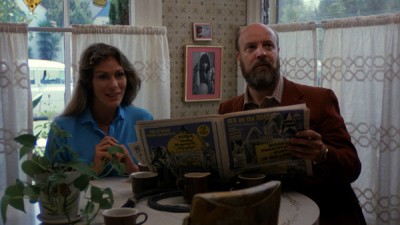 Video:
Paul Bartel's black comedy lands on Blu-Ray as a 1.78:1 widescreen, 1080p transfer, MPEG-4 AVC encoded. The overall picture quality looks fantastic, maintaining the look of the period film stock, allowing for grain and texture that befits the original photography and not smoothing out or enhancing the edges so as to overcompensate. Colors are vibrant, and the level of detail in every frame is excellent.

Sound:
The original soundtrack is remixed in mono and given a nice LPCM presentation. There is nothing of note here to complain about. Tones are natural, the track is free of glitches or extraneous noise, and despite being a fairly level mix, still sounds vivacious.

Subtitles for the deaf and hearing impaired are available, as well.

Extras:
Eating Raoul has been packaged in a regular clear-plastic case. The interior booklet is smartly designed as a menu for Paul and Mary's restaurant, with the usual credits and the expected critical essay worked into the layout.

The bonus features are led by a full audio commentary featuring writer Richard Blackburn, production designer Robert Schulenberg, and editor Alan Toomayan. They cover the production in detail, reliving their time working with Bartel. The making of the film is also celebrated in the new 25-minute documentary "Cooking Up Raoul." It features new interviews with stars Mary Woronov and Robert Beltran, as well as character actress Edie McClurg, who has a particularly memorable cameo in the movie.

Vintage materials include a 22-minute interview with Bartel and Woronov, the original theatrical trailer, and a short gag reel put together in the 1990s.

Two of Bartel's short films are also included on the disc. The near-half hour The Secret Cinema from 1966 (accompanied by an audio interview with Robert Schulenberg about the film) and the just under nine minutes of Naughty Nurse from 1969. I like The Secret Cinema a lot. It's a demented comedy about a girl who slowly begins to realize that her whole life is being filmed, and that everything she is going through is a hoax for other people's amusement. Bartel apparently later remade this for the TV series Amazing Stories in the 1980s.

FINAL THOUGHTS:
Rent It. Tastes change, and so does art that was once on the cutting edge become passé. Paul Bartel's Eating Raoul may have shocked and scandalized three decades ago, but it comes off as toothless and not very funny now. The story of a couple who try to fund their dreams by luring perverted swingers into their murderous lair goes all-out in sending up 1980s culture (it was the "Me Decade," after all), but the humor has flattened like a soufflé since the film's release and there isn't much to really chew on here despite an excellent Blu-Ray package. 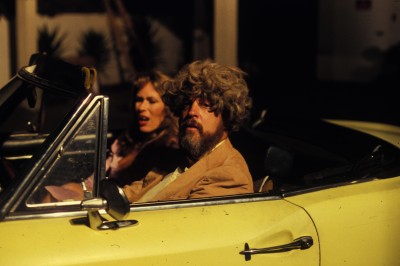