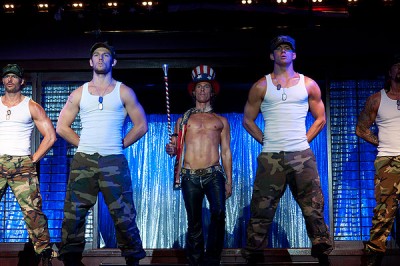 There is a point in Magic Mike when Matthew McConaughey is dancing shirtless while wearing an Uncle Sam hat, and six young guys are dancing behind him dressed as combat soldiers. As it's happening, it's impossible to decide whether Magic Mike is the most ridiculous movie ever made or the greatest. It's an issue that may never be resolved, but in the many scenes like this where the dumb fun is at its highest, it doesn't really matter.

Magic Mike is the latest from chameleonic director Steven Soderbergh. It's the much publicized dramatization of star Channing Tatum's former career as a male stripper. In the film, Tatum plays Mike, a charismatic go-getter who juggles a variety of businesses while he saves money to make his own custom furniture. He runs a roofing crew and does auto detailing, and he also dances for horny cougars and bachelorettes. The club he performs at is run by an older dancer named Dallas (McConaughey, who brought along his bongos), and Dallas has been promising to give Mike a piece of the pie when the troupe moves from Tampa to Florida. To earn his keep, Mike rustles up the nightly audience and also procures new performers. He picks up a 19-year-old named Adam (a somnabulic Alex Pettyfer, I Am Number Four) and takes him under his wing, calling him "The Kid." That's basically the set-up in a nutshell.

It's also much of the plot of Reid Carolin's script. For a good hour or more, Magic Mike is a nonstop party. Mike and Adam dance, they take home a couple of the customers, they hang out on the beach, they dance, and McConaughey says "Alright, alright, alriiiiiight" more times than I could keep track of. It's an insane idea of a narrative, and it's even more insane how much it works. Here's a male stripper dressed as a doctor humping a gurney, here's another dressed as a fireman coming to the rescue. And there's Magic Mike, making the ladies go wild with his hip-hop gyrations. 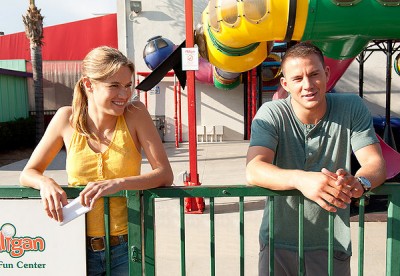 What's amazing is, for as slick of a Hollywood production as a movie like Magic Mike should be, Soderbergh has made it in the same verité digital style as his quick and dirty efforts like The Girlfriend Experience and Bubble. Serving as his own cameraman--and also his own editor, both pseudonymously--the director moves quickly, creating an on-the-fly aesthetic that is immediate and deceptively natural. Some scenes flow moment to moment, with little cutting and impressive choreography; in others, he favors extreme close-ups and topsy-turvy angles. Magic Mike is like Coyote Ugly directed by Jean-Luc Godard. Though the club sequences are incredibly goofy and awesome, some of the best stuff also comes when the music stops and Tatum gets real. Even if it is woefully underdeveloped, there is a pretty decent romantic subplot where Mike falls for Adam's sister, a medical assistant named Brooke (Cody Horn, TV's The Office). Brooke asks Mike to look out for her kid brother, and Mike likes how honest he can be around her. Most of their scenes play like improv, fueled by a warm chemistry between the two actors. Tatum is a surprisingly likable presence onscreen, as it turns out. 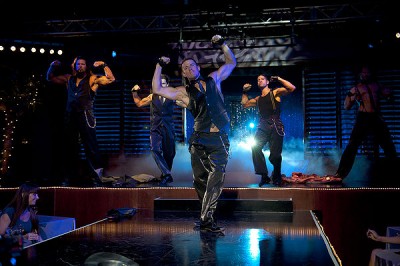 Magic Mike's fatal flaw, unfortunately, is that it really has nowhere to go. The final half hour slows down considerably, as Carolin and Soderbergh take care of the business of that pesky "story." There's not much that you can't predict pretty easily: Adam likes the wild style a little too much, and there's some All About Eve backstage drama as Dallas turns out not to be the good guy Mike vouched for earlier. Drugs are involved, and women, and Mike is going to get his heart broken not once, but twice. (Olivia Munn also has a brief, revealing role as Mike's occasional hook-up and prowling partner.) Brooke is forced to get stern with Mike, and Mike is forced to take a good hard look at his life. It's hard to blame the guys for taking the script in this direction. Honestly, I can't quite figure out what else they could have done with it. Maybe they'd have been better off just letting the party be its own narrative arc and staging one final, over-sized blow-out, with Channing Tatum's abs forming a ladder to the clouds that he and his admirers could gleefully ascend to someplace more pure. You know, wherever Olivia Newton-John and John Travolta flew off to at the end of Grease.

Despite the fizzled final act, Magic Mike is still worth it. Particularly for the ladies out there reading this. There's lots of beefcake on display. Scene 2 begins with a butt shot, for goodness sake, and the women in my audience squealed as soon as they saw it. Good for you. Go ahead, ladies. You've been waiting your turn for this kind of eye candy for a while. I don't get the appeal of the pull-away pants and the penis socks, but what the hell. Live and let live, I say! 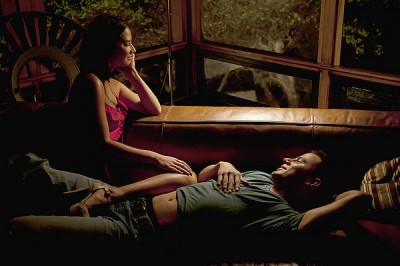