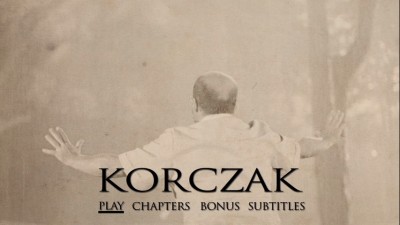 Even without the big quote from Steven Spielberg on the front cover of the DVD, it would be hard not to compare Andrzej Wajda's Korczak to Schindler's List. Both are early 1990s movies, shot in black-and-white, about one man's effort to make a difference in Poland during the Holocaust. There's easily room in this universe for both of them, the stories and the storytelling are different enough, but it kind of makes me sad that most people know one more than other. I'm a big fan of Schindler's List, I'm not slamming Spielberg here, it's just that Korczak is equally good and just as deserving of praise.

In fact, one could really argue that Wajda's 1990 release is even better for being simpler, and richer for having a more complex character with a less obvious redemptive story arc. Henryk Goldzmit, as portrayed here, is actually in need of no redemption. He wasn't a saint, but was clearly a man who understood his own foibles and, in spite of them, had a firm commitment to doing the right thing. Goldzmit was a doctor, author, and radio host who was better known as Janusz Korczak. Wajda and screenwriter Agnieszka Holland (Europa, Europa) give us everything we need to know about this man right from the opening scene. As the lights come up on Korczak, the main character is in the radio station, on the air, dismissing the notion that anyone acts out of pure charity or principle. Rather, the very act of doing good is born of a selfish impulse. Dr. Korczak worked with children all his life and, by his description, because it made him feel good to do so, not because he was a good person.

Of course, the irony is, having such unshakable belief in the power of individual action is an extraordinary thing, and men like Janusz Korczak are the rarity rather than the norm. He is played here with incredible sensitivity and nuance by Wojciech Pszoniak (Danton). The actor shows him as a dichotomous personality, a gentle soul who can play choo-choo train with the kids at his orphanage but is also quick to anger. Cross the wrong line with him, or interrupt his work, and he'll be cross with you. 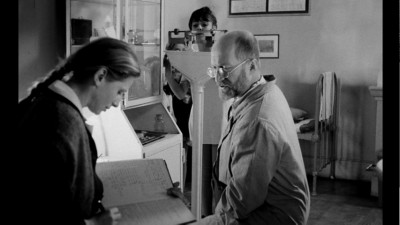 At the time of the radio station scene, war has not yet come to Poland, but it's on its way. Wajda and Goldzmit move quickly through events, taking only enough time to show Korczak's pre-war life before moving ahead to the establishment of the Warsaw Ghetto. Despite many offers for the well-known scholar to hide out away from the camps, Korczak refuses any special treatment. He'd rather stay with his kids and use his connections to improve their chances of survival. The main thrust of Korczak's narrative is watching him navigate the politics of the ghetto (the Gestapo, the Jewish leaders, and the black market all have some sway), with special time given to some of the children under his care. In particular, a conflicted older boy, whose sensitivity might cause him harm in such conditions, and a younger boy who is his opposite, having maybe adopted too many survival skills from making his way in dark times. The child actors here are remarkable. All the performances are, really. Wajda gives them a stage to be real and natural with each other, and as a result, they never appear forced or mannered.

Korczak is told as a series of vignettes, each one causing further resonance throughout the larger story, like multiple pebbles being dropped in a lake, their increasing circles eventually cover the whole surface. Wajda and cinematographer Robbie Müller (Paris, Texas) adopt a sober style for the picture, something more akin to Roberto Rossellini than the aforementioned Senor Spielbergo. Life in the ghetto only degrades, there is no need to glorify the rubble. Wajda uses the German film crews that chronicled life under occupation as an excuse to occasionally insert real footage of the suffering, and it wouldn't do if the reality didn't match up with the re-creation. All of these things--the lack of flash, the faith put in the performers--are a sign of an intense directorial confidence. It's a true measure of Wajda's skill that he trusts that we will know there is a hand pointing the way and arranging the pieces, but to never go so far as to wave that hand in front of our faces.

Naturally, there is an inevitable destination in a film like Korczak. There are really only two ways a Holocaust story can go: either the characters escape or they go to the camps. It's weird considering spoilers when talking about history, but the small triumphs and the shattering heartbreak of Korczak require some mystery, at least the first time around. We know that Dr. Korczak will do the right thing, and the tension and inspiration comes from not knowing how he will manage to stay that strong all the way through or even what levels of strength will be required. 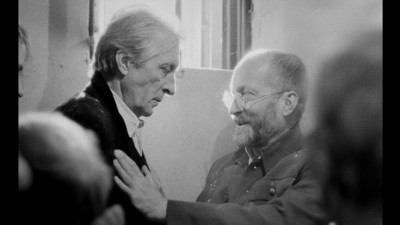 Video:
Kino has done a splendid job restoring Korczak for DVD. The black-and-white, anamorphic widescreen image (1.66:1) looks beautiful, with a strong balance between the light and the dark and an exceptional level of clarity. Lines are sharp and there is no pixilation or interlacing. It's an extremely conscientious, excellently rendered DVD image.

NOTE: My screengrabs look a little squished, I am not sure why. Something funky with my viewing program on my laptop, I suspect. There were no black bars on the sides when viewing them on my Blu-Ray player, and everything looked good on the TV.

Sound:
The mono soundtrack, mainly in Polish with some German, is very good, as well. The mastering is clean, with no hiss or external noise. Dialogue comes through clearly, and there is nice volume modulation. The subtitles read well, with a natural sounding colloquialism, and interesting choices for when not to translate certain elements for effect (presumably, where Wajda didn't expect his original audience to understand some stray bit of dialogue that wasn't in Polish).

Extras:
Just a trailer and a stills gallery.

FINAL THOUGHTS:
I know there can be some trepidation when it comes to sitting down and watching a Holocaust movie. It's hard not to find them to be a downer. And while Korczak doesn't have a false happy ending, it does have an inviting storytelling style that takes a great subject--Dr. Janusz Korczak, a crusader for children in the Warsaw Ghetto--and portrays him in such a way so as to demonstrate what an extraordinary human being he really was. Korczak is a genuine example of the incredible capacity for good one man can have, especially when he's banished such rudimentary qualifiers from his philosophy. Stories such as this are never depressing, regardless of the setting. In terms of a/v quality, Kino has put out an excellent DVD, giving the movie the presentation it deserves. Andrzej Wajda's Korczak couldn't be more Highly Recommended. 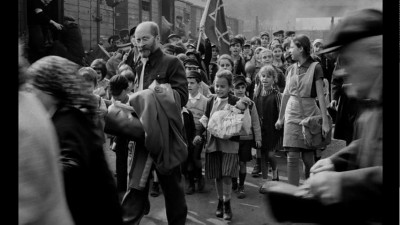