From the time it was announced, there was a hearty deal of skepticism that came with it. A big budget action film inspired by a board game? Well, it isn't like a silly concept that was turned into a film has not done well financially before, particularly if the Pirates of the Caribbean and Transformers films have taught us anything. But still...it's from a board game, so it MIGHT be good, right?

Erich and Jon Hoeber (Red) wrote the screenplay "Based on HASBRO's Battleship" which Peter Berg (The Kingdom) directed. The film includes a pair of brothers. Stone Hopper (Alexander Skarsgard, True Blood) is Commander of a ship in the Navy, and his brother Alex (Taylor Kitsch, Friday Night Lights) is a Lieutenant in the Navy, but is more of a renegade and screw-up that his brother has to always cover and apologize for because of his roguish behavior and covert insubordination. Alex is dating Samantha (Brooklyn Decker, Just Go With It), who is the daughter of the Admiral (Liam Neeson, Unknown). Kind of sounds like a general conflict story that we have all seen before, right? How wrong you are! The Hoppers' participation in a Naval exercise with Japanese sailors (an occasional occurrence, since they are stationed in Hawaii) soon becomes pear-shaped, as a mysterious presence comes to Hawaii. They are, in fact, aliens, who have come to Earth to establish contact with their home planet in the hopes of future colonization here. 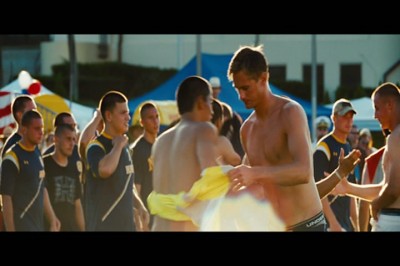 The basic framework for the story is decent enough for the first act or so, but then it starts getting a little weird in its execution. The premise for the aliens coming to Earth is that they are responding to a signal that Earth is sending to other planets of similar atmospheres, in the hope that people of Earth can explore other planets. So (presumably), the aliens are not only beating Earth to the punch, but taking it a step further and occupying our house before we did the same thing to theirs. It's this scientific element which allows us a bit of access to Cal (Hamish Linklater, The New Adventures of Old Christine), a computer scientist who knows what the signals are like and what's coming. However, when the invasion/occupation starts to unfold, his scenes are scant, occasionally getting time next to Decker's character, who is a physical therapist who works with wounded soldiers in their Iraq and Afghanistan recoveries (particularly one ornery character who returned home with no legs and is getting used to replacements). And the simple fact of the matter is neither Decker nor Linklater carry the story or provides moments that make them look engaging or charismatic. Though admittedly Decker is nice to look at.

Which brings us back to the action. The aliens are formidable, some of the action makes for exciting moments, but other parts of it just look silly and overreach. The aliens begin to move inland and damage other things like roads and an airfield to further isolate Hawaiian residents who are already several thousand miles away from the mainland. But like other films before it like Independence Day who set the stage for a seemingly unbeatable alien force, there always a fatal flaw that is academic and somewhat stupid. I won't reveal it here, but suffice to say it is Shyamalan-esque. And as a tangent, allow me to vent on the bait and switch that seemingly occurs both in the film's marketing and in the film itself. Neeson is all over the trailers (or at least was from my memory), but is in the film for a cup of coffee. This goes to a certain degree for Skarsgard. As a result Kitsch is the focus of the action, playing to a degree off of fellow FNL alum Jesse Pleamons (who plays a crewmember on the Hoppers' ship) and singer Rihanna. THAT Rihanna. Far be it for me to bring up her personal life when discussing her acting, but she should stick to singing. Her acting is wooden, she is not a very likeable person on screen, seemingly assigned to perform the film's one-liners, which she can't even do right, much less entertaining.

And another thing; this movie is long. Way too long. At credits it runs two hours and twelve minutes, and the epic moments of alien transformation eventually morph into story flaw after story flaw, resulting in a third act battle on a stage that is simply not believable. It uses said stage to do things that are not believable, and result in stupid 'pat themselves on their backs' moments after the film that are also for lack of a better phrase 'not believable.' Really, the Navy is going to have an awards ceremony after a good portion of Hawaii has been destroyed and/or obliterated? Child, please. Even at its base levels, Battleship not only asks you to leave your suspense at the door, but wants you to bury it in the backyard before renting it. 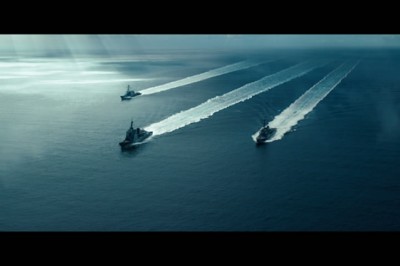 I'm writing this on the heels of the U.S. Men's soccer team winning a friendly/exhibition match 1-0 over Mexico in Mexico, something that the team had not been able to do to date. And many friends of mine, myself included, fired handguns into the air while cooking steaks over a fire, with lit cigars in our mouths and Budweiser's in our hands, celebrating the best of America. Well, maybe not, but Battleship would seem to symbolize a lot of what America is from a stereotypical sense, in that it is bloated, oblivious, loud and implausible. And the America I would rather see a world with more U.S. Soccer wins than dumb, unnecessary action movies if that's okay with everybody.


Universal shows off Battleship with an AVC-encoded 2.40:1 widescreen presentation which looks amazing, there is no other way to describe it. Image detail is abundant and consistent through the film both in the foreground and background, black levels are deep and inky and color reproduction is accurate and vivid without being over saturated. The flesh tones are a little on the red side, but they are not a substantive distraction during viewing. The computer generated robots and aliens have loads of detail to them and appear as seamless and natural as possible, and the source material is as clean as can be. Much like Decker, the film is real nice on the eyes.


Just as nice as the transfer is the DTS-HD Master Audio 5.1 lossless track, which sounds exquisite. It is almost as if your subwoofer should be pushed with some other film first as calisthenics before starting, because it does work from the opening moments. It does work in a soccer game between the American and Japanese sailors. It does work when Alex is trying to find a chicken burrito for Samantha. And those are the quieter moments! Rest assured, when it's an anchor chain falling into the ocean or when a ship is destroyed and sinks, the effects are foundation rattling and immersive. Directional effects are clear when they occur and channel panning is more than present during the experience. This is simply fantastic to listen to.


The big extra of the bunch is "All Access with Peter Berg," Universal's picture-in-picture foray which turns out to be decent. Berg comes in and out of the track frequently to discuss concepts and motivations for the film, and uses illustrations and computer graphics in a touchscreen manner similar to Minority Report. It includes cast interviews as they recount the story and scene-specific moments, and there are many on-set moments included, like scene rehearsals, or between takes fun of Berg tying a naval knot in a rope. Previsualization footage of the aliens and their weapons is also thrown in, and some nods to the board game are also mixed in. The feature serves as a true complement, not doing a lot to dominate the film, but throwing in its own worthwhile information. 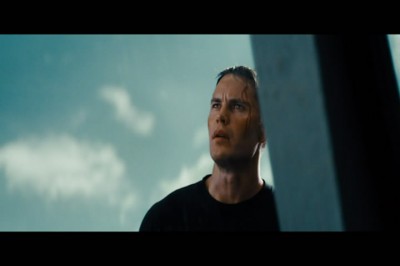 Moving along, there is an alternate ending previsualization (7:33) which Berg introduces and seemingly makes the film sillier if it were included. There is a tour of the USS Missouri (20:10) where Berg meets some of the sailors and officers who served on the boat and we get an in-depth look at the boat from bow to stern, aft to starboard. It includes such trivia as why the decks on the boat are wooden and includes some additional detail on historical moments on the ship, such as the World War 2 documents that were signed on its deck. It is a fascinating piece. Next is "Preparing for Battle" (11:09), where the appeal of the game is touched upon, along with the challenges in adapting it for film. Securing Berg's talents are talking about, and locations for the film are shown in scout footage. "All Hands on Deck" (11:40) is a look at the cast individually by Berg, and they talk about their thoughts on the film and their characters. I am not sure why Rihanna specifically had someone to Navy her up for the role, but OK I suppose. The Department of Defense/Navy approval for the film and utilization of resources is mentioned here, along with the contributions of the technical advisors for the project. "Engage in Battle" (6:58) is a look at the difficulties of shooting on ships and in water, which "Commander Pete" (5:46) looks at Berg's general set goofery and the cast's thoughts on him as a director. "The Visual Effects of Battleship" (11:30) is just that, as we see the ideas for and challenges in making the aliens, ships and other computer effects for the production. The Second Screen/Pocket Blu experience is one which you can enjoy on your tablet while watching the film (as of this review, it was not available for download). The package also comes with a second disc which houses the standard definition copy of the film, and includes redeemable codes for both a Digital iTunes-friendly copy version and an Ultraviolet copy for either preference.


A minor spoiler here; while the aliens use 'ammo rounds' that look like board pegs in a nod to the game, nobody yells 'You sunk my battleship!', in the event you want to shell out some cash to check this film out. While technically you will likely not find anything better out on the market at the moment (and to a degree, the bonus material is much better than I was expecting), the film is filled with such implausibility it is more funny than anything else. Definitely worth checking out for the porn that is the lossless track which is amazing, but not worth doing much else with.