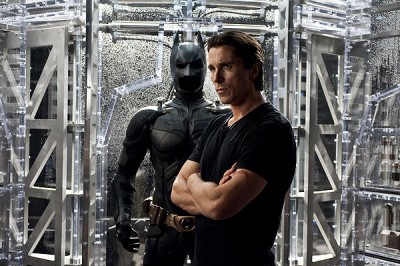 The Dark Knight Rises is perhaps the most anticipated movie of the summer, if not the year. It's the movie that has to be good. If it's not, people are going to lose their minds. Judging by some internet reactions to other critics' reactions, they already have.

Well, take a deep breath and be calm, because I liked the third of Christopher Nolan's Batman films a lot. Not as much as The Dark Knight, but certainly better than Batman Begins. It's not the outright victory the build-up demands, but you should walk away satisfied--particularly as the not-as-great stuff is largely in the early portion of the picture. For whatever faults at the outset, The Dark Knight Rises manages to obliterate all doubts with a rousing final act.

For those who have been following along, the second film in Nolan's trilogy, The Dark Knight, ended with Batman (Christian Bale) disappearing into the night after taking responsibility for the death of Harvey Dent, a.k.a. Two-Face. He intended to allow Dent's reputation as a hero to remain intact so that the dead man could serve as a symbol to the citizens of Gotham. The Dark Knight Rises picks up several years later. New legislation in Dent's name has allowed Police Commissioner Jim Gordon to clean up the streets, and the Batman has retired. His alter-ego, Bruce Wayne, is a recluse living in his mansion, a seemingly broken man. He briefly ends his exile to chase after cat burglar Selina Kyle (Anne Hathaway) when she steals his dead mother's pearls, but putting the cape and cowl back on is not necessarily in the cards. 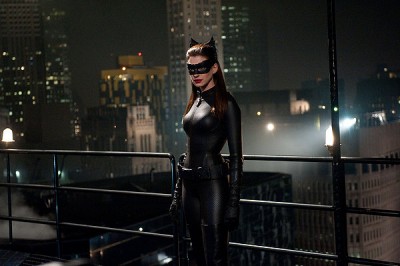 That is, until he discovers that she-who-would-be-Catwoman's caper had bigger consequences. She was actually working for international muscleman Bane (Tom Hardy), a terrorist bent on destroying Gotham City and using Bruce Wayne's cash to do it. Bruce puts on the leather armor one more time to give this interloper the what-for, but he's no match for the bruiser. Bane defeats him, and like Clint Eastwood in a Spaghetti Western, Batman is forced to lick his wounds in exile until he is strong enough to take another crack at the villain. By that time, Bane has all of Gotham under his thumb.

That's more or less the plot. Trust me, this movie is two-and-a-half hours long and full of all kinds of twists and narrative pockets, I have barely scratched the surface. There's a lot going on, and quite a bit that is worthwhile. Gary Oldman is excellent as always as Jim Gordon, and he's joined by the equally adept Joseph Gordon-Levitt as a do-gooder cop who sees things his less-astute colleagues miss. His character, John Blake, gives the movie its moral backbone. Anne Hathaway is fun as Catwoman, but the part is underdeveloped. Christopher Nolan co-wrote the script with his brother Jonathan, and they seem eager to have fun with the flirty thief but also a little scared to cut loose. (Oh, boys, why so serious?) They save the weightier backstory for Bane, whose supervillain origins transcend the rather silly comic book steroid case he is based on. Tom Hardy's face is obscured during the movie, and he speaks with a Sean Connery accent through an amplifier; yet, he somehow manages to command the screen whenever he steps into frame.

There are a lot of good character bits in the early part of the story. Bruce Wayne's relationship with his butler Alfred (Michael Caine) provides some pathos, and the Caped Crusader's hubris upon getting back in the saddle sets up some solid reasoning for his failure and eventual rebirth. And yet, this is also where The Dark Knight Rises really suffers. The script lacks drive. In The Dark Knight, the characters had an obsession that made their behavior necessary. There was a push and pull going on in all of them, an amplified version of the dual choices everyone must make to do right or give in to our more selfish impulses. 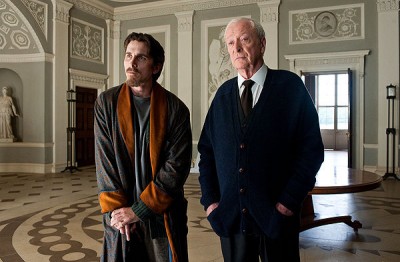 The motivation in The Dark Knight Rises is far more calculated and thus, far colder. There is none of the hero building that we would expect from a tale of personal redemption such as this. As a result, the quiet character moments that are supposed to make the fight scenes matter tend to run too long and be a bit dull. I usually don't mind the way Nolan takes his time with a scene (both The Dark Knight and Inception have remained vibrant over multiple viewings), but the first half of The Dark Knight Rises seems bloated. The pieces of this puzzle aren't that complicated, there was no need to be so careful putting them together. (This also just illuminates the lack of attention to detail evident in many choices throughout the film; Nolan puts extreme care into crafting his sets and his set-ups, but the particulars of real life often escape him. For instance, people sure look pretty good in the climax despite having spent a few months living in adverse conditions.)

Luckily, there are a couple of solid action sequences at the start--including a killer opening--that your interest won't wane for too long while you wait for The Dark Knight Rises to shift into overdrive. The first showdown between Batman and Bane is brutal and intense, and there is no denying the power of Christopher Nolan's filmmaking when all hell finally breaks loose. His agility with staging a big scene lends itself quite well to portraying anarchy on screen. The "gotcha" twists will really get you, and the denouement strikes all the right chords, bringing the Trilogy to an effective close while giving a satisfying nod to what may be next if the studio decides to carry on in a new fashion. (Most of the principles here are done with the franchise.) You also want to see The Dark Knight Rises in IMAX if you can. The Gotham skyline the filmmakers have concocted deserves to be viewed as large as possible, and the audio effects and Hans Zimmer's score really benefit from the booming IMAX sound system.

Often when there is a big event movie like this, disappointment can be attributed to poorly managed expectations. I think here it's more that Nolan didn't manage his own aspirations. There is maybe too much going on in The Dark Knight Rises, including some interesting political subtext that he doesn't take quite as far as he maybe needed to or had room for. (No, it's not the stupid theory about Bane's name that a certain bloviating gasbag has been spreading; I think both sides of the political fence could argue over who really wins and loses in this one, while all agreeing that we hate whoever the first person to make an "Occupy Gotham" T-shirt turns out to be.) Had this movie taken a more straight shot at the prize, culled the excess (Catwoman, for instance, doesn't actually need to be in this), and focused more on the titular character's personal arc, it might have been a true hero's finish. It's still a nice lid on the series, but merely good enough when greatness was required. 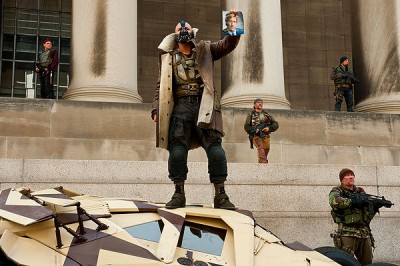