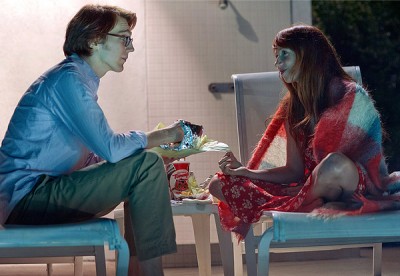 Ruby Sparks isn't a real girl. She is a figment of a writer's imagination. While this is true of all characters we see in movies, it's especially true of Ruby, the title character of the new film Ruby Sparks, the first directorial effort by Jonathan Dayton and Valerie Faris since 2006's breakout hit Little Miss Sunshine. No clue why they waited so long to get behind the camera again. Perhaps they suffered from the same pangs of success as the made-up author in this follow-up.

Ruby Sparks reteams the directors with Paul Dano, the troubled teen of Little Miss Sunshine and the lanky preacher from There Will Be Blood. Dano plays Calvin, a literary wunderkind whose career took off like a rocket with his first novel, published when he was barely out of high school. Ten years later, Calvin still struggles to follow up on that effort. References are made to Catcher in the Rye and there is also a nod to Jonathan Franzen. Blink and you might miss that copy of Freedom hiding in Calvin's bedroom. Both were authors who faced a big challenge in capitalizing on their own success. Franzen took nine years to write Freedom after the accolades he received for The Corrections.

Calvin's main neurosis appears to be self-obsession. He talks a lot about not writing. He talks with his therapist (Elliott Gould), his brother (Chris Messina), and a rival author (Steve Coogan) who resents Calvin's "genius" status but not his being shy with the trigger. Calvin also obsesses about a long-gone girlfriend (True Blood's Deborah Ann Woll), someone he won't discuss, at least not without harsh language, but whose presence is constantly felt. Oh, yeah, and Calvin has mommy issues, too.

All of this goes into what turns out to be Calvin's breakthrough, a quirky girl who comes to him in his dreams. She is Ruby Sparks (Zoe Kazan, The Exploding Girl), and the detailed conversations Calvin has with her in his sleep leads to a spontaneous eruption of typing that yields a pile of pages, the beginning of his sophomore book. Only, something about the vividness with which Calvin imagines Ruby brings her to life for real. One morning, she's there in his apartment, completely oblivious to her fictional status, but a fictional construct all the same. 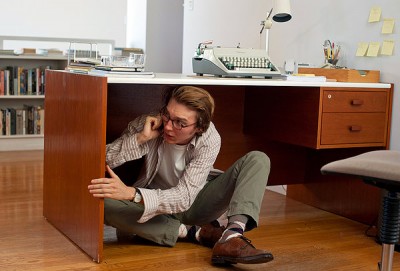 This is the long and short of Ruby Sparks: it's Calvin dealing with the notion that his literary invention has come to life, entering into a relationship with her, and eventually falling prey to his worst impulses. His brother is the first to see the possibilities: Calvin has spontaneously generated a woman who is subject to his every turn of phrase. Who wouldn't take advantage?

Ruby Sparks is an uneven, yet interesting experiment. Some of it works pretty well. There are moments in the first half when Ruby Sparks is a screwball romantic comedy that it's actually quite funny. Dano is an odd comedic star. He gives a fairly physical performance, powered by his gangly limbs and Woody Allen-esque line readings. His nervous energy isn't always convincing, but neither is the script, which is actually by Ruby herself, Zoe Kazan. There are moments here where it appears that Kazan is trying to subvert the "manic pixie girl" tradition, a bit of revenge against Garden State and other films of a similar ilk. It's actually Calvin's horny brother that nails Calvin to the wall for this: he reads the manuscript and tells the boy author that it's clear Ruby is made up. She corresponds to an immature ideal that isn't real.

As Ruby Sparks grows darker and deeper, this does become the script's central concern: Calvin is not equipped for a true relationship. When the creation he initially patted himself on the back for making complex starts to show genuine complexity, he can't deal with it, and so he tries to simplify. Unfortunately, there is no happy medium, at least not until he grows up and owns his anxieties and failures.

Which is where Ruby Sparks falls apart. While these issues are laid out for Calvin and Ruby and there is some narrative resolution, the film fails to confront its fundamental themes head-on. Being, ostensibly, a romantic comedy, we know that Calvin will do the right thing, but there is little indication that he really learned his lesson or accepted his own failings. Rather, those failings are relayed to us by the much-maligned ex; Zoe Kazan surprisingly gave the film's revelatory monologue to a walk-on character. Perhaps had she saved it for the climax, we might witness Calvin experiencing an epiphany; instead, as it plays out, it's more like seeing a bullied schoolboy turn into the bully himself, go too far with it, and step back from the brink. That's a physical reaction, one of revulsion for the self and one's own actions, rather than a mental or emotional transformation.

I'll admit to a morbid fascination with stories about writers. To write about the authorial life is often a cheap ploy that scribes resort to when they have run out of options. Zoe Kazan's concept of what it's like to be a working writer is shallow and over-romanticized, and my guess is she gleaned most of what we see here from other movies about authors--which is a bad mistake, since the amusing irony is that most writers get it wrong themselves. Books and movies that claim to be about the writing life are often odd fantasies, the equivalent of a law-enforcement agent bored with endless paperwork indulging in daydreams of being James Bond. One of the few films to avoid resorting to the myth of the "blank page" and get the author's struggle right is Starting Out in the Evening with Frank Langella; and, of course, Michael Chabon kind of put the lid on "sophomore slump" stories (and teenage prodigies) with Wonder Boys. Likewise, Paul Auster achieved mixed results when he tried to do the whole "muse comes to life" thing with his directorial effort The Inner Life of Martin Frost. Honestly, though, I'd skip past both that film and this one and go right to Zach Helm and Marc Forster's Stranger Than Fiction, which stars Will Ferrell as a fictional character slowly becoming aware of his literary status. It's the best film of all the ones mentioned here.

But I digress, and perhaps overstate Ruby Sparks' failings. It's not a particularly unctuous film, it's just a disappointingly bland one. For all the fine moments of conversation and situational romance, there are at least two more that simply fall flat. The script takes too long dealing with Calvin's "whoa, this is weird, is this real?" sputterings and not enough with the one-on-one between dreamer and dream girl. (Or, for that matter, the hilarious cameos by Annette Bening and Antonio Banderas, as Calvin's mother and stepfather.) It's a nice effort, easily less cloying than Garden State and more clever than 500 Days of Summer, but it doesn't quite manage to have its cake and eat it, too. The girl is still manic, she's more of a pixie than ever, and she saves the nerdy boy so that he can save her in return. In the end, subversion becomes acceptance, resistance becomes acqueisceance, and you're left with the nauseous realization that the mealy mouthed movie boyfriend wins again. 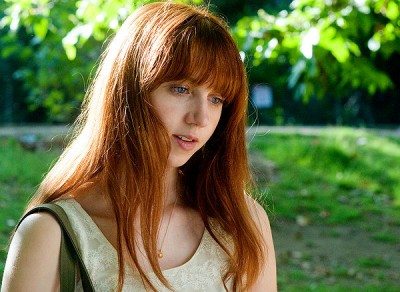