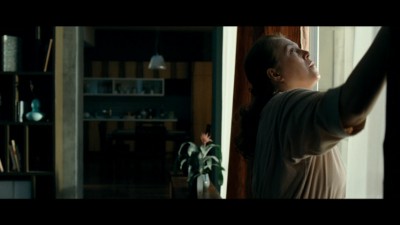 There are some crimes that are obviously irrational, committed by stunted, helplessly monstrous people incapable of knowing the difference between right and wrong -- the kind of crime perpetrated in films like Psycho or >Halloween and not so very often in real life, however shocking when it does happen. Much more troubling and frightening is the much more common, everyday slide into moral chaos that leads to crimes committed and rationalized by sane people in broad daylight -- the kind, to cite a recent example, committed and rationalized by certain areas of the financial industry against the rest of us. It's a fascinating, scarily recognizable microcosm of that kind of crime -- what leads up to permits it -- that Russian filmmaker Andrey Zvyagintsev (a former commercial director who made the transition to narrative features, earning accolades with his promising debut, The Return, in 2004) presents for our consideration in his latest film, Elena, a film unfolded like a drama that, because it doesn't jar, is more horrifying than any psycho or monster movie. It's Zvyaginetsev's most mature work yet by a considerable margin -- a haunting moral tale that, with a compelling, relatable, and sympathetic character for its conscience-deficient protagonist, draws us effortlessly into its web and doesn't let us off the hook easily. 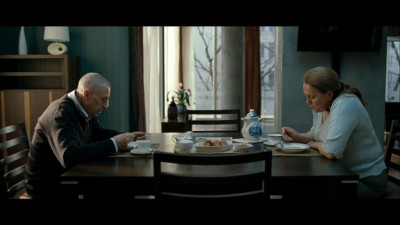 Nadezhda Markina is strikingly solid, sympathetic presence as she brings to life Elena, an ex-nurse who used to live in typical communist-era deprivation and near-dereliction but has now married into the privileged, orderly, affluent part of the former Soviet Union's new post-communist world. Zvyagintsev and his perennial cinematographer, Mikhail Krichman, shooting on location in Moscow, place us into that alluringly modern, comfortable world from the very first images, when the film opens on still, dawn-lit shots of Elena and her retired-banker husband Vladimir's (Andrey Smirnov) spacious, tidy, well-appointed apartment in a gentrified part of the city; the filmmakers take their time, only locating the sleeping Elena after have a full impression of the peaceful, comfortable environment she contentedly constitutes one human part of. After she rises, we follow her through what appears to be a typical day: breakfast, television, small talk with Vladimir, taking the train to visit her son from a previous relationship. It's an existence not without its privations; Elena is treated a bit like an inferior and/or servant by her affectionate but undemonstrative, business-minded husband, who monitors the generous allowance that makes Elena dependent upon him; watch too much TV, sleep in separate beds, and have scheduled, passionless sex; and Vladimir disdains Elena's poor son, Sergey (Aleksey Rozin) and his public housing-dwelling brood almost as much as Elena does Vladimir's spoiled, party-girl young-adult daughter, Katerina (Elena Lyadova). But those opening shots, and many more throughout, combined with the glimpses that Zvyagintsev gives us of Sergei's cramped, exceedingly inelegant existence in that massive, ugly housing tower, is enough to convince us that Elena has, between the limited options of a gilded cage on one hand and a messy, impoverished one on the other, chosen wisely. 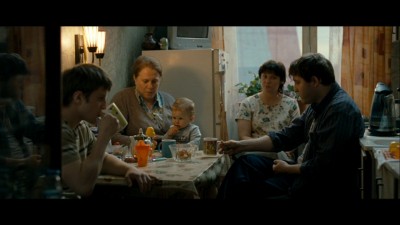 Zvyagintsev, Krichman, and editor Anna Mass create a measured, even tempo like a steady, accumulating drip, metronomically seducing us into the smooth rhythms of Elena and Vladimir's upper-middle-class existence -- its sheltered routines, its minor frustrations and tensions. It's around one of these apparently commonplace, recurring tensions that what lies beneath Elena's contented and dutiful surface reveals itself, abruptly and decisively in the film's shocking twist -- all the more breathtaking because Zvyagintsev unerringly makes subtlety and restraint the name of his stylistic game, so no fanfare, emphasis, or blatantly foreshadowing preparation paves the way for the dark, disconcertingly plausible places Elena, and the film, are prepared to go. This narrative catalyst is, again, utterly understandable and convincing: Elena wants her wealthy husband to extend his watchful but not stingy largesse to her poor family, particularly because her high-school-age grandson, whose academic inferiority (probably due to his preference for violent video games and casual gang activity) has cost him any meaningfully subsidized higher education, needs a large sum of money to oil the university wheels and prevent his being conscripted into the Russian army and thereby permanently consigned to the lower economic class. Vladimir drags his feet, and after he becomes enfeebled after a heart attack (and therefore reliant upon Elena's caretaking/nursing skills) and he and his slowly but surely maturing daughter reach a point of reconciliation, he tells Elena he's altering his will to favor his daughter -- leaving Elena with nothing but enough for herself, not her family. This planned writing into perpetuity of Vladimir's double standard when it comes to his child and hers is the final straw for Elena, who visibly reacts not at all; what follows may not be all that surprising, but the near-reflexive deliberation and proficiency with which Elena takes this undeniably unfair twist of fate into her own hands makes it indelibly disturbing. 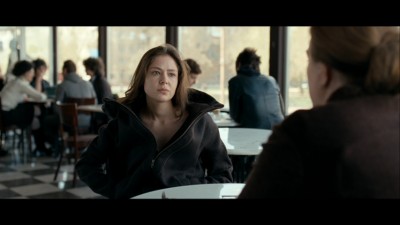 That indelibility, and the power and gravity with which Elena is replete, come from a central performance and an anesthetic approach that are both skillful, inspired, and right in tune with each other. As mentioned, Markina is counter-intuitively winning and not at all villainous as Elena, etching the character as a fully fleshed-out individual with at least her share of human good instincts and sensitive feelings (she's even sort of religious) whose completely understandable buying in to a new, capitalistically prosperous, irresistibly prescribed way of Russian life extends with horrifying ease to the moral disregard and casual, ruthless rule-bending required, at least when it comes to those of her ilk, for inclusion in the new Russian dream. The filmmakers create a steady pace that starts off like the rhythm of life, slow and uneventful, and then, in the context of the calm assuredness with which Elena performs her misdeed, comes to seem relentless and harrowing -- because of, not despite, the film's even tempo, which lends every action depicted an air of such inevitability, it's like being a bystander to an accident nobody knew how to avoid. 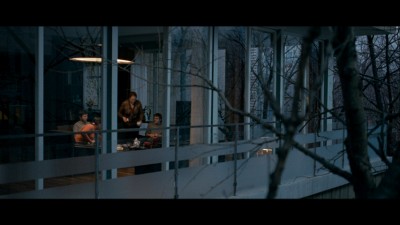 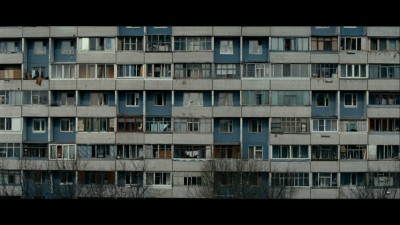 These troubled waters are, aptly enough given the film's nationality, Dostoyevsky territory, and Elena, with its chilling implications of crimes committed by "good," ordinary people, all told from their relatable point of view, is like an even more unblinking rendition of Dostoyevsky fan Woody Allen's Crimes and Misdemeanors, minus the comic relief. (Speaking of Allen, the presence of a cool, mesmerizingly repetitive Philip Glass score reminds one of how well-suited his music is to stories of moral reckoning and breakdown, whether here, in Allen's Cassandra's Dream, or Notes on a Scandal). Zvyagintsev's abundant skill as a teller of moral tales is perhaps most evident in the symmetry with which he opens and closes Elena, bookending it with a near-identical shot that drives home (no sledgehammer necessary) the change for the worse the film documents -- the moral sense that disappeared, without anybody noticing or caring, in the meantime. Life goes on, order is restored, desires are fulfilled, and there is a happy ending, at least for some. But at what cost, and at whose expense? Those are the questions that Elena poses so acutely and inescapably, guaranteeing that its disquieting, thought-provoking effect will linger long after the credits roll. 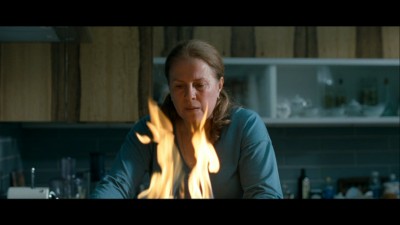 
The widescreen anamorphic transfer of Elena, retaining the film's original 'scope theatrical aspect ratio of 2.35:1, is a solid job. The colors are nicely variegated and vivid, skin tones look natural, and darker and solid-black portions of the screen are unblemished; the only real picture-quality drawbacks are some occasionally noticeable edge enhancement and a somewhat, but not too badly, flattening-out use of digital noise reduction leaving not quite as much celluloid texture as would truly do the film's distinctive visuals justice.


The film's sound (in Russian with optional English subtitles) is presented in Dolby Digital 5.1 surround or 2.0 stereo tracks. While both are sparkling clear and free of distortion, it's the 5.1 track, as usual, that disperses the sound farthest and fills the room (particularly with Phillip Glass's score, which ebbs and flows, volume-wise, in a way that truly soars in the 5.1 mix); on the other hand, if you don't want such an overpowering (or loud) experience, the 2.0 mix makes the sound more compact without really diluting it.


"About Elena," a 30-minute interview with director Andrey Zvyagintsev (apparently made for the French DVD release of the film, included here with English subtitles) in which he opens up about the evolution of the project and the film's story, its Dostoyevskian moral dimension, and the contrast between the standard Good-triumphs meaning of many fairytales and fables (and films) with the mercenary Evil, explored in Elena, that he sees "alive and well" in Russian (and world) society today.

--"Making the Poster Screenprint," a two-minute video rundown of the creation of the film's distinctive poster by graphic designer Sam's Myth (aka Sam Smith, designer of such distinctive re-release posters as House and World on a Wire.) 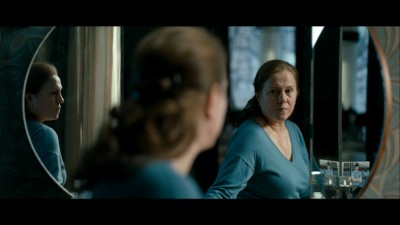 
The most accomplished outing yet for the rising Russian filmmaker Andrey Zyvaginetsev (The Return), Elena is a film with an implacably cool surface and a heart of darkness that will leave your mind reeling long after it's over. The film's two clashing milieux -- Moscow's post-'90s nouveau-riche high-rise apartment neighborhoods and its squalorous, rundown, still-teeming (despite unfettered capitalism) public-housing high-rises -- are straddled by Elena (in an absolutely brilliant, petrifying performance by Nadezheda Markina), an ex-nurse who's remarried well but whose husband, Vladimir, is reluctant to help his wife's son and his family, left far behind by the post-communist wave that he's so fruitfully ridden. Elena's ordinariness -- her very understandable needs, desires, and actions -- becomes ever more unnerving as Zyvaginetsev details, with excellent stylistic restraint, the amoral, mercenary lengths to which she's willing to go to spring her family from the still extant, poor old Russia and assure their place in the well-off new one. Zyvaginetsev's observational, calm style, with his camera surveying his homeland's brave new world as it forges inexorably on, perfectly reflects the blank slate that is Elena, and the effect, by the end and after we've seen what she (and, by extension, any ordinary, understandable person just following the implicit rules and values of their society) is capable of, is most unsettling. In the tradition of great Russian moralist/philosophical literature (Dostoyevsky, et al.), Zyvaginetsev has created a portrait of the banality of evil -- morality eroded into total, complacent immorality -- that's riveting, beautifully played and filmed, and, in the end, quietly terrifying. Highly Recommended.