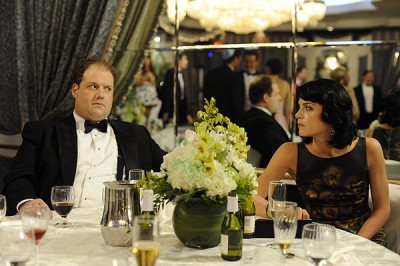 I've always found Todd Solondz's films a little hard to take. The unwavering misanthropy and the childish finger-pointing in his satire have made his true point of view difficult to puzzle out, and his adolescent fascination with complex narrative structures have stumbled under his amateur-level grasp of what makes them tick. Others seem to like his stuff--Happiness is probably chief among his achievements--and sometimes I've labored under the misconception that maybe if I kept trying, I'd figure out just what this guy is trying to do.

Well, I still don't quite know, but at least for his latest effort, Dark Horse, I have a theory. Much like Mulholland Drive was David Lynch's way to rescue a failed TV pilot, turning it into a surreal full-length feature, Dark Horse is Todd Solondz's pitch for a CBS sitcom. He sets it up from the very first scene, embracing in full the core concept that has driven so many of the Eye network's popular comedies before him: fat guy, pretty wife. Just keep that in mind while watching Dark Horse, and somehow it causes everything to make sense. You still may not like it--I sure as hell didn't--but you'll at least know what Solondz is aiming for. Dark Horse is King of Queens for the psychologically disturbed.

Jordan Gelber stars as Abe, the aforementioned fat guy. Abe is an overgrown child. He wears tracksuits and idiotic T-shirts. He lives with his parents (Mia Farrow and Christopher Walken) and works at his dad's real estate company. Except he doesn't work that hard. Most of his time is spent bidding on Thundercats toys on eBay or driving to the big toy chain (name obscured to protect the innocent) to exchange a scratched Lord of the Rings action figure.

And so it is with a child's confidence that he goes after Miranda (Selma Blair, apparently reprising her role from Solondz's biggest mess, Storytelling). They are sat at the same table at a wedding, and despite them having no real conversation and her obvious lack of interest, Abe insists on getting her phone number. Then he shows up at her house for a sort-of-but-not-really-agreed-to date. By the end of the date, he's asked her to marry him. "Don't say anything," he tells her, "just think about it."

That's Abe's entire rap: just let the fantasy be, don't burst the bubble. When confronted with his faults, he's got readymade excuses; when circumstances go beyond his control, he indulges in infantile daydreams where his dad's secretary (Donna Murphy, Higher Ground) takes care of him. As things at home and with Miranda--who, let's be honest, is an emotional, pill-popping wreck who can't let go of her ex-boyfriend (Aasif Mandvi from The Daily Show)--get more complicated, these delusions also take on increasingly complex facets, one spilling into the other, until we are no longer sure what is really happening and what is just in Abe's big dumb head. 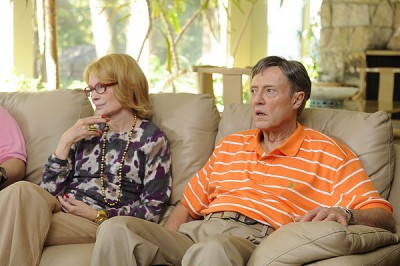 Which, again, is not unlike Mulholland Drive. Except when David Lynch dove headfirst into his dreamscape, he was hunting for difficult truths. Todd Solondz spends his time gathering low-hanging fruit. Abe is an easy target. He is a man-child with no regard for other people, and it's easy to make fun of him. He still sleeps in his tiny bed in the room where he grew up, lining the walls with vodka ads and Simpsons toys, but he insists he's not weird or anything, not like a Trekkie. That's some deep ironic humor right there. What next? Abe making fun of another fat guy for being a big slob?

What would have been hard would be for Solondz to endeavor to understand what causes Abe to be the way he is, and then to expose those discoveries to him. Then Solondz could have had free rein to destroy or to heal this poor bastard as he saw fit. Instead, Solondz lets Abe get lost in his own equivocations before ruining even this escapism for the guy, as well. Abe's own daydreams turn against him, yet the true puppet master offers him no quarter, no way out of his own mind.

The only factor that makes Dark Horse even remotely watchable is the cast. The actors do their best here, approaching Solondz's pedestrian scripting with absolute sincerity. Both Farrow and Walken have a clear empathy for Abe's parents, portraying them as two people who know they have somehow failed and yet who don't stop struggling to figure out how to fix the situation. Similarly, Selma Blair never seems to judge Miranda. Sure, she has little to do but mumble through the drugged-out dialogue, but note the moments where Miranda's own self-delusion blossoms. There's something sweet in how she acquiesces to Abe, and something profoundly sad in how she reverts to old habits around her ex. There's a subtleness of gesture, a quality to how she modulates her voice, that transcends the writing.

The biggest applause should be reserved for Jordan Gelber, however. He inhabits the screen with the same unflagging confidence as Abe, only he's obviously far more in control of what he is doing. Gelber relishes in the details that make this guy who he is. He never just enters a room, but instead announces himself, slapping the doorframe, lobbing off an inane greeting. Somehow, the actor manages to find the fragility that is hidden just underneath the bluster. There is actually one pivotal scene about ten minutes from the end, when the title of the movie is revealed to have a deeper meaning than even Abe realized, and the look on Gelber's face is heartbreaking. It's a very brief moment, but for that instance, I actually started to think maybe Solondz had something going on here after all. Beneath the film's flat aesthetic, buried in its cookie-cutter suburban imagery and the ridiculous fake pop songs that the director uses like a readymade crutch, maybe there actually was a heart beating. Maybe there was an actual human center to this vengeful cartoon. Is it possible that Solondz has something to say, and he just doesn't know how to get there? Is he the overgrown child himself, suffering and struggling to grow up and mature, to make his art into something meaningful and real? 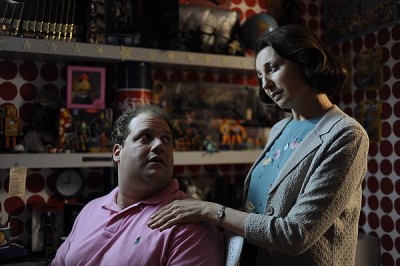