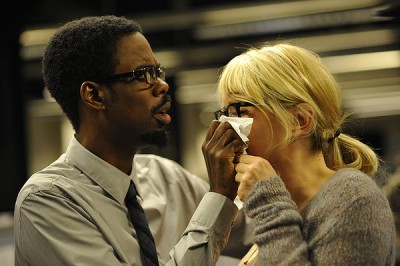 In 2007, actress Julie Delpy (Three Colors: White) branched out and wrote and directed her first feature-length film. 2 Days in Paris was a well-made romantic comedy (of sorts) that borrowed heavily from the Before Sunrise/Before Sunset series (which Delpy starred in). It was a talky relationship picture about two people together in a specific space during a specific amount of time.

Five years later, Delpy picks up the story of her avatar, a late-30s photographer named Marion, in 2 Days in New York. In the intervening five years, she and her husband had a child together, and they also got divorced. Marion is now living with Mingus (Chris Rock), who also has a child from one of his two previous marriages, and they are raising the kids together. Mingus is a public radio DJ and a writer. Things between them are good.

2 Days in New York begins on the eve of Marion's big gallery opening. She has been taking a series of photographs for a decade, self-portraits from the ceiling above her bed that purport to chronicle the progression of a relationship (it's hard in the little we see to fathom how). In addition to selling her prints, the gallery is also going to sell Marion's soul to the highest bidder, a little piece of conceptual art. This is all going down on Halloween, and to celebrate the occasion, Marion's now-widowed father Jeannot (Albert Delpy, the director's actual father) and her sister Rose (Alexia Landeau) are coming to visit. Rose is also going to bring her boyfriend, the poet Manu (Alex Nahon), who also happens to be Marion's ex. And he thinks black people are really cool. He wears Barack Obama shirts and has Public Enemy stickers on his laptop. Guess whom Manu is going to annoy? 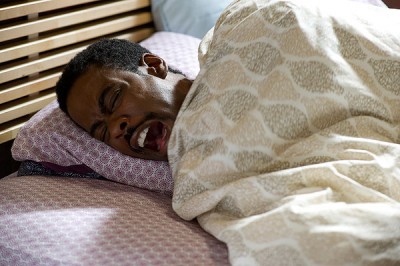 Manu's obsession with African-American culture is one of the keenly observed details that makes 2 Days in New York a fascinating entertainment for the first half-hour. Marion's family is dysfunctional in a strongly vocalized, European manner, and seeing their bizarre behavior chafe against Mingus' more mellow sensibilities can be quite funny. In large part, this is thanks to Chris Rock, who proves an excellent comic foil in this situation. His responses to the bizarre things the Frenchies say and do is as sharp as we would expect from the comedian's stand-up. The fact that he also plays Mingus as an intelligent and sensitive individual rather than a caricature is a bonus. He is the only real person in an ocean of French stereotypes.

Too bad Delpy can't sustain this level of humor. The script, which was written by herself, Landeau, and Nahon, is as overrun by the visitors as the fictional couple are supposed to be. If the years since you saw 2 Days in Paris has dulleed the irritation you likely experienced being invited into Marion's childhood home, you might want to try really hard to remember how much she and her family got on your nerves before giving 2 Days in New York a spin. These folks are loud, judgmental, and completely lacking in self-awareness or restraint. For as serious as Delpy wants 2 Days in New York to be, she seems to have bussed these characters in from some French equivalent of The Klumps. Or maybe that Jack Black parody from Tropic Thunder where everyone farts. Hell, regular mention is made of Jeannot's odor and he is warned at least once to keep control of his flatulence. All someone needs is a fat suit.

Which sucks, because Delpy does have some insight into how relationships work and there is a better movie that could be made with her and Chris Rock trying to navigate life raising two kids while still keeping their romance vital. There is a sweetness to their relationship that is rather charming, and his method of dealing with her anxieties is impressively realistic and fair-minded. Marion can be a complete lunatic, and is much like a child herself, rarely taking responsibility for anything she does. At one point, she even lies and tells a neighbor that she is dying of a brain tumor, and she regularly abandons Mingus with the kids. Despite the ludicrous events that transpire in the film's finale, we still walk away understanding why Mingus can't let this woman go.

Delpy has a lot of potential as a director. She experiments a lot with style, using speedy montages to move the story along and allowing cinematographer Lubomir Bakchev (The Secret of the Grain) to change the way he photographs a scene to fit the mood. She is also very generous with her performers, often showcasing their individual work to the detriment of the narrative. (Seriously, you can cut sometimes, you don't have to let your dad keep rambling about Easy Rider.) I'd rather see her either do a real romantic comedy or a straightforward relationship drama. 2 Days in New York tries to be either/or, and ends up being neither. 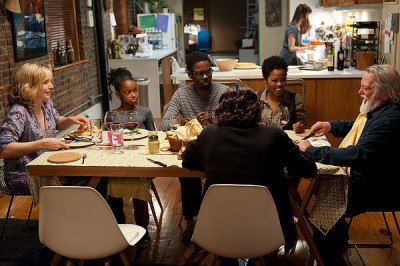