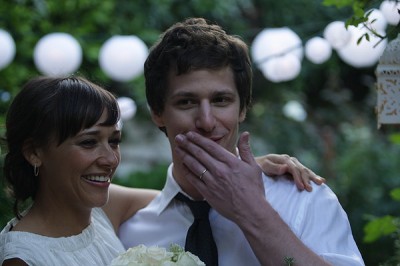 The Burt Bacharach/Hal David-penned pop hit "Make It Easy On Yourself" famously opines that "breaking up is so very hard to do." This, it would seem, holds true some 40 years after it was a hit for Jerry Butler, because Celeste and Jesse, who are the titular couple from Celeste and Jesse Forever, can't seem to get away from each other no matter how hard they try.

Parks and Recreation-actress Rashida Jones, who also co-wrote the script, stars as Celeste, a successful woman who runs her own marketing company and is a self-billed trend spotter. Her and Jesse (SNL funnyman Andy Samberg) have been best friends since they were teens, and though it's never made clear when they transitioned into relationship status, they did eventually hook up and get married. At the start of Celeste and Jesse Forever, they are separated and heading for a divorce, but as their other best friends (Ari Graynor and Eric Christian Olsen) point out, it's weird and a bit confusing that they spend practically every waking moment together, sharing the same in-jokes and habits as they always did. In fact, Jesse, who is some kind of artist, still lives in his studio behind their marital home. He's never more than a backyard away.

Once the idea is planted that the pair may be overcompensating, things start to get weird. A drunken night of sex gives Jesse the wake-up call he needs. He moves out, both of them start seeing other people, and their lives kind of turn to mush. Celeste's in particular. The back half of the picture becomes less the romantic comedy it started out as and more of a sad slog through Celeste's bewilderment at her own loneliness. Rashida Jones is burdened with carrying most of Celeste and Jesse Forever--and hey, she wrote it, so that's her choice--and though she is likable and her portrayal of broken-hearted depression is honestly rendered, as is her eventual emergence from the sad state of her own affairs, there is still something not quite right here. Despite barely a 90-minute running time, Celeste and Jesse Forever seems to drag on forever. Someone needs to splice in Cher from Moonstruck, so she can slap Celeste and tell her to snap out of it.

Celeste and Jesse Forever is directed by Lee Toland Krieger, whose last credit was The Vicious Kind with Adam Scott. I think a lot of what is ultimately wrong with Celeste and Jesse Forever is down to his directorial choices. There is a tonal problem throughout the film that keeps it from ever quite gelling. The script by Jones and Will McCormack has a lot of funny lines and a solid emotional arc. Much of it is rather slick, actually, and the jokes sound like they'd be more at home in a Judd Apatow comedy. This is particularly evident when Jones and Samberg are working alone together; the natural comedy that emerges between them seems like the kind of business they'd likely find through improv rather than the printed page.

And yet, for as good as all that is, Krieger's indie aesthetic seems to work against it. The look of Celeste and Jesse Forever is almost too pared back. The realistic lighting and sparse cinematography by David Lanzenberg actually makes some of the banter seem forced (which it sometimes is, but more on that in a second). Worse are the times when Krieger switches artistic gears to slam an emotional point, such as slowing down the aperture or opting for a more sonically abstract music cue. These isolated incidents really call attention to themselves, and suggest either a director with impulse control issues or one who's too insecure to let the more difficult material stand on its own. The script may be Apatow, but the presentation is pure 1990s Sundance.

Not that the writing is completely without fault. Some supporting characters, such as the philosophical pot dealer, are too broadly drawn and attract too much attention to themselves. (Of course, that guy is played by co-writer McCormack, so he clearly tossed aside his better writer instincts to let the actor in him showboat; see also Zoe Lister Jones in Lola Versus.) In other scenes, it's the situation that is overdone, setting aside the otherwise realistic set-ups for a gag. Rashida Jones playing drunk at Ari Graynor's wedding rehearsal, complete with Raggedy Ann wardrobe and ranch dressing on her face, may be the worst scene the actress has ever performed.

There are fine original moments throughout Celeste and Jesse Forever, as well as some excellent supporting performances. Ari Graynor is rock solid as always, and Elijah Wood and Emma Roberts also have good turns as, respectively, Celeste's business partner and the tween popstar they've been hired to rebrand. There is a nice meeting of the generational minds when Roberts' character ends up crying on Celeste's shoulder. Andy Samberg, who has been known to overdo it in his time, also finds the right pitch as the co-lead. He's funny and charming and vulnerable enough to make the sadder sections work.

It's just that none of these many elements come together all that well, and the story really meanders for the second half of the picture. There are two or three times where you're sure that Celeste and Jesse Forever is wrapping up, only for the movie to keep going. It's as if all involved could never decide on what the right emotional climax should be, and so they just used them all.