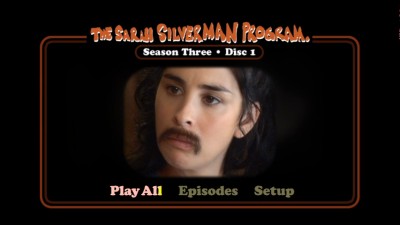 Sarah Silverman may have the most perfectly realized personality in stand-up comedy, and so it's a real treat to see that, for the three or so years her show ran, that personality translated into a sitcom format so wonderfully. Though ostensibly a parody of the episode-driven sitcom of yesteryear, The Sarah Silverman Program is also a showcase for the weird humor of Silverman and her pals. It takes the comedian's persona as a lovable innocent who says all the dark and wrong things and plops her down in cornball plots just to see what happens. The result: something that is intriguing, smart, offensive, and drop-dead hilarious. It's basically an extension of her act: set up the audience with a seemingly innocuous scenario, deliver a twisted punchline, mix vigorously with surreal tangents.

That last part was never more in evidence in the short-lived series than on this, it's final DVD set, the two-disc The Sarah Silverman Program: Season 3. The core cast and set-up are basically the same--Sarah is an overgrown child who lives by the good graces of others, particularly her sister (both on TV and real life, as she's played by Laura Silverman) and her sister's police officer boyfriend (Jay Johnston); added B-plots come courtesy of her neighbors, the pot-smoking gay couple played by Brian Posehn and Steve Agee--but it seems to me that the shows have gotten a whole lot crazier in this final go-around. In the last 10 episodes, Brian and Steve build a robot, Sarah takes over controlling what can and can't be shown on TV, an imaginary friend from Sarah's childhood returns as a horny grown-up (and is played by Andy Samberg), Laura hosts a fake talk show in her bedroom, Sarah decides she was born a man and becomes one, and a ghost of the past comes back as a literal ghost. Okay, sure, this is a comedy that had its main character sleep with God in the first season, and then God became a creeper ex, but you know what I mean.

The thing is, there is a comfortable freedom evident in the third season, a seeming feeling that they can get away with anything and might as well try. This could be down to the fact that the cast and crew of The Sarah Silverman Program had already been through the trials and tribulations of near cancellation, and the third year only exists because the Logo network stepped in to subsidize these episodes alongside Comedy Central. Having already stared down death, Silverman and friends had nothing much more to lose. Why not go for broke? 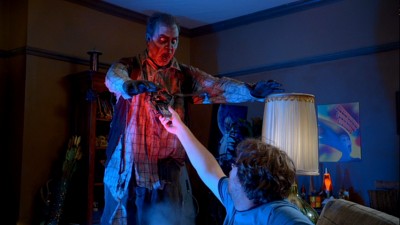 I don't know if it was designed to thank their new sponsors or not, but my favorite episode of Season 3 is "Nightmayor." In it, as a prank, Sarah and Brian invent a fake mayoral candidate named May Kadoody. When the invented politician beats the legitimate political frontrunner (The West Wing's Bradley Whitford, who is also joined by Josh Malina), an actual May Kadoody emerges (the always excellent Maria Bamford). When the real-life May turns out to be a bigot who wants to ban gay marriage, Brian and Steve's relationship is put in jeopardy. Sarah has to discredit her own invention, and the outlandish secret she uncovers--which involves some very inappropriate distribution of breakfast food--is pure Sarah Silverman. No one else could be that unassuming while being so specific and gross, and somehow lace it with social commentary that doesn't come off as heavy-handed.

That's a large portion of the joy of watching The Sarah Silverman Program: breakfast foods. Well, breakfast foods and the ability to take them wherever you want. Such as break into a song all about pancakes the way Sarah does in the third season's premiere episode (shown as the second installment here), when Sarah takes over as a children's TV show host. Musical numbers are not out of place on this sitcom; neither is animation. In the imaginary friend episode, Sarah disappears in a fantasyland that is all cartoons; in another, an animated bird flies out of a pamphlet to give her advice. The childishness is offset by the edginess of the humor. This is a series that touches on a variety of risqué topics, from 9/11 to Auschwitz, pedophilia to masturbation (try eating sourdough after episode 3.6). These very "touchy" subjects are treated with the same silliness and irreverence as more tame topics, like how terrible stoner jam bands are or the dangers of believing Home Alone is real.

Of course, none of this would work without the uniform excellence of the cast. By this point, they have a well-established chemistry and can play off each other in ways that are effortlessly hilarious. Even regular supporting players like Tig Notaro, playing Jay's partner on the police force, have a very natural place amongst the ensemble. (Notaro is the recipient of a masterfully executed Jay Johnston spit-take.) Everyone here has their established role, and you can always count on them to stick the landing. Silverman is a generous leader. For as good as she is, and as enjoyable as she is to watch on screen, she never takes over to such a degree as to forget who else is with her. This is a group performance through and through, and despite the name above the title, jokes are distributed equally.

Comedy Central has a pretty good track record for television sitcoms that pay homage to the medium while also lampooning it. The Sarah Silverman Program joins the ranks of previous strong showings like Strangers with Candy and That's My Bush! in deconstructing the Nick at Nite generation's fascination with half-hour laugh tracks. It's iconoclastic, dangerous, and cheekily subversive. Arguably, three seasons is not enough, particularly when they are as short as this one (only ten episodes), but it also would be a high-wire act that would be difficult to keep on balance. There is only so much you can parody in the format before it starts to get repetitive. (Hey, The Simpsons: take a note!) The Sarah Silverman Program may be over, but it exists now in kind of perfect crystallized form, untouchable, never growing old. 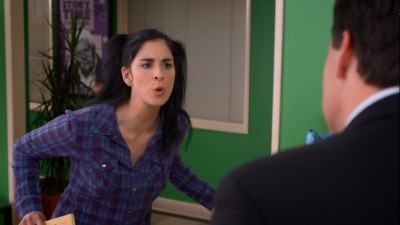 Sound:
The original soundtrack is presented in Dolby Digital, with optional Closed Captioning. Audio options include standard stereo and a multichannel 5.1 mix. A quick sample comparison didn't reveal much difference between the two. Either one should work fine. The importance here is the actors and their dialogue, and that rightfully takes the center of both mixes. 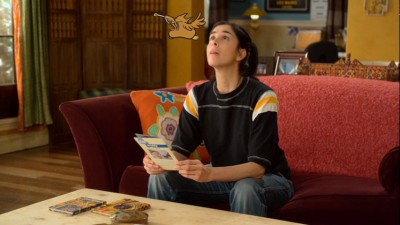 Extras:
Select episodes of Season 3 come with audio commentaries featuring a fairly steady roster of cast and crew: Silverman, Agee, co-creator Rob Schrab, writer Dan Sterling, and sometimes Jay Johnston. You can access these via the episodes menu, where they are listed for the individual episodes. (There is also a "play all" function.) There are three commentaries on DVD 1, one on DVD 2. Episodes overall are split 7 and 3, with DVD 2 having the rest of the extras.

Those extras include multiple conversations with cast and crew, with a more current recording called "The Writers and Producers Talk" that spans a half-hour and features the writers room reflecting on their work, and a short q&a with the cast at the L.A. club Largo. There is also about half-an-hour of featurettes that focus on individual episodes, taking us behind-the-scenes in a way that is far more fun than one normally expects from promo material (but is honestly no surprise for The Sarah Silverman Program, which is all about being different and all about fun).

A big bonus here is the show's original pilot, which was later re-shot. This inclusion gives us a glimpse into the development process, and there is also commentary on it with Silverman, Schrab, and their third co-creator, Dan Harmon, who left the show early and ended up creating Community. Likewise, we get audition tapes for both Steve Agee and Jay Johnston.

FINAL THOUGHTS:
Highly Recommended. The Sarah Silverman Program: Season 3 is a blast of hilarity and surrealism that will be sorely missed from the basic cable airwaves. This vehicle for the titular star, one of the best and most unique stand-up comedians working today, is an irreverent parody of the situation comedy. It features a strong ensemble cast and an unflinching penchant for provocation. The scripts alternate between silliness and genuine satire, often putting salient social commentary next to the most base potty humor, and nailing both with tremendous skill. While it sucks not to have Sarah Silverman in our lives on a weekly basis, The Sarah Silverman Program: Season 3 does get out while the gettin' is good, leaving behind a daring comedy series that rarely misses. 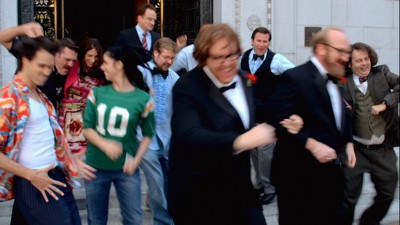