"I don't want to run anything, Colonel. Or anybody. At any time." 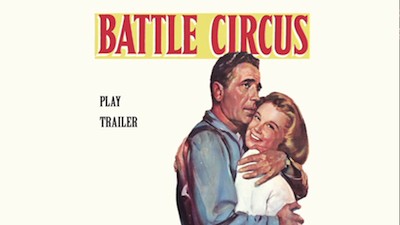 I'm sure someone has already done the study, but if not, an enterprising scholar needs to do a comparison of shifting attitudes between World War II and the Korean War as reflected in Hollywood war movies. I was recently doing some research on the 1950s and '60s, and one author (Betty Friedan, if I'm not mistaken) posited that the thing with art in the '50s, and the philosophical plight of the average American in general, was that any examination of the human condition was turned inward. Greater meaning outside of the individual was lost, the world was now only identifiable and relevant in relation to my place within it.


In most films about the Korean War that I'm familiar with, from Sam Fuller's The Steel Helmet to both the big and small-screen versions of M*A*S*H, the soldiers are not really motivated by the larger mission, there is no morally righteous goal like in WWII. The warriors have grown weary of the fighting, and they are gripped in what they perceive as an absurd situation. At the start of the 1953 movie Battle Circus, when a couple of rookie nurses arrive at their new M*A*S*H unit, one of them asks the Sergeant that drove them, played by Keenan Wynn, what his duties are. He says the main one is to stay alive. Winning the war means you getting out of it.


One of those nurses is Lt. Ruth McGara (June Allyson, Little Women), and she will become one of our focal characters. Her main counterpart is Major Jed Webbe, who saves her life during an attack mere moments after she steps out of the jeep. He is played by Humphrey Bogart, who is essentially updating his image as the worldly cynic for a new age. In the previous war, he would have stayed out of combat until compelled to do otherwise; in this one, there is no compulsion, he's just there and he's marking time until he gets through. It's kind of bizarre to watch another Korean War movie set in a medical unit, and even harder not to compare this one to M*A*S*H when Bogart's soldier/surgeon is, like Hawkeye Pierce, an iconoclast who works too hard and breaks all protocols and enjoys both the ladies and his drink. As much as I like Alan Alda, there's something far more fascinating about seeing Bogart pull this rank. Probably because he's not afraid to pick up a rifle, and you actually believe he can use it.


Battle Circus was written and directed by Richard Brooks (In Cold Blood, Bite the Bullet). For this war story, he favors the unpredictability of combat over any three-act plot structure. The title of the movie is taken from the fact that the medical camp has to keep relocating, and the crew running it has gotten pretty good at pulling up stakes and moving to the next safe spot. The narrative is punctuated by such moves, and in between, Bogart is torn between wooing the fresh nurse and being called to scrub in. There is no end to the string of casualties, be it the young Korean boy whom he operates on against orders and all hope, or even rushing out into the field to pick up hurt infantryman and chopper them back to base. For all his tough talk and the pessimistic veneer, Jed Webbe is a guy who both cares about his job and is good at it.


It's the courtship of Jed and Ruth that provides Battle Circus with anything close to a throughline, and it's a love story that is both conventional and unconventional. It's the manner in which the participants push and pull one another, the way they deny their feelings before embracing them, over and over, that simultaneously makes their romance part of a motion picture tradition and also sets it apart. Jed is looking for a casual relationship that is as impermanent as the M*A*S*H set-up. No past, no future, only right now. "Nothing is for always," he tells her. "We'll be lucky if we can keep it right and real even for one night." This is not the talk of a man that believes in any empirical good, only the empirical "good as I can be." It's a hell of a line, and Bogie can sell it like no other.


He's also pretty good at the war stuff. He's had enough of it, and he says so outright, stating that he's fed up with the "ugliness, stupidity, futility." It's a hard argument to deflect, particularly if you consider the perspective of the actual time period in which it's being uttered. He expresses his wonderment to his commanding officer, saying how hard it is to fathom that, in their lifetime, there have been three World Wars. While the Korean conflict did not expand to such dimensions, I can see where it would have been hard to make sense of being sent to an international theater so soon after leaving the last one, especially when the first World War, the one preceding even that, was billed as "the war to end all wars." (Interestingly, the enemy is mostly unseen when the bullets are being fired; is this our first real instance of viewing the other side as a faceless mass?)


To suggest, however, that this leaves no room for heroism would be wrong. The most heroic act is the one done when it might be a bad idea because, regardless, it's a good thing to do. The final scenes of Battle Circus is the closest to rah-rah as Brooks let's the movie get, and the most enthusiastic back-patting is done out of frame from Bogart, he doesn't even hear it. But that's how he'd probably prefer to be rewarded, especially since he's too busy kissing the girl to deal with shaking anyone's hand, anyway. 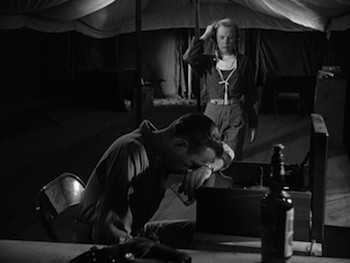 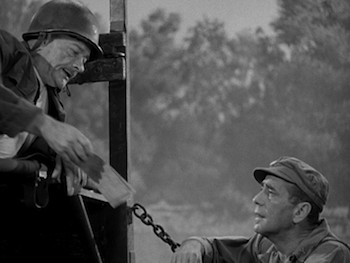 
Battle Circus is part of the Warner Archive collection, a series of lesser title released as manufacture-on-demand products. The transfers for these films tend to be less than fully restored--if that is a distinction--working with available materials. In the case of Battle Circus, the full frame, black-and-white picture is pretty good. Yes, there is some print damage--mainly scratches and pops in the frame--but the underlying image is strong with good resolution. Lights and darks both look good, and the detail comes through fine.


The English soundtrack is mixed in mono and sounds very good. Volume levels have heft, and there is no distortion or hiss. Nor did I hear any crackles or unwelcome noise.


Recommended. Humphrey Bogart stars as a rebellious surgeon in the Korean War, looking to woo a pretty nurse and to save lives even when his orders otherwise demand he take the safe path. No, it's not the original version of M*A*S*H, but it very well could have been. It's Battle Circus, written and directed by Richard Brooks, and it's a combat picture that captures the essential zeitgeist of the conflict. Bogie is a man weary of war, who believes in little beyond himself, but does the right thing anyway. It's not a great picture, but it's a very good one, and a definite gem of a performance from the star's later period. 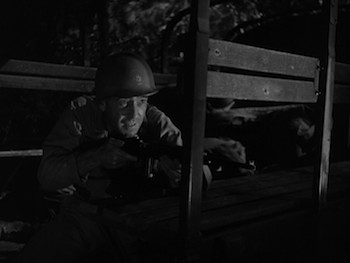 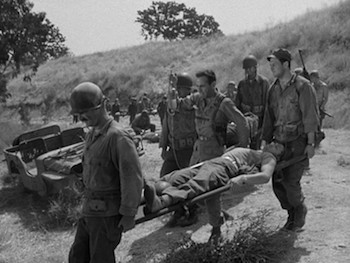