Please Note: The stills used here are taken from the 2002 DVD release of the film, not the Blu-ray edition under review. 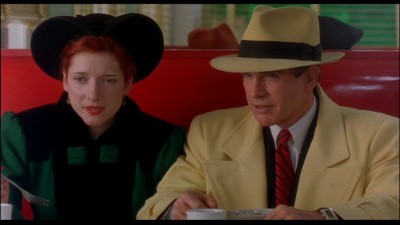 In the spring of 1990, Disney was pushing Dick Tracy, Warren Beatty's big-screen adaptation of the iconic Chester Gould comic strip, with a torrent of merchandise and publicity. They expected it to be that summer's Batman, which had dominated the pop culture landscape a year prior. While that didn't entirely pan out, Beatty's comic strip detective is a far more interesting film than Tim Burton's initial take on the Dark Knight (though 1992's Batman Returns beats them both). Dick Tracy is a risky Technicolor endeavor, almost like a special effects art-house movie, and represents the kind of crazy marriage of one medium to another through an embracing of technology that we wouldn't see again until 2008, when both the dismal Speed Racer movie and Frank Miller's The Spirit, a similar riff on pulp detective comic strips, both flopped.

Gould began work on the Dick Tracy newspaper comic in 1931; it's still being published today. The title character is a police detective with a granite jar and an easily identifiable yellow hat and trench coat. One of the more popular conventions in the newspaper serial is how Tracy and the other cops communicate via wristwatch walkie-talkies. Tracy doggedly pursues a rotating cast of grotesque villains, each named for their odd appearance or some kind of personality tic, all exaggerated by Gould's blocky ink line. Pruneface's skin is wrinkled and shriveled, the Rodent looks like a rat, Flattop has a flattened head, Mumbles speaks in strings of incomprehensible syllables, etc.

All of these elements are carried over into the Dick Tracy movie. The script by Jim Cash and Jack Epps Jr. (Top Gun, Anaconda) crams in as many characters from the strip as possible. As producer, director, and star, Warren Beatty wears his love of the source material on his sunshine-colored sleeve, rebuilding Gould's colorful inventions as real-life constructs and facsimiles thereof. Tracy's city is a combination of sets, matte paintings, and digital trickery, painted in solid colors, lit up with glowing neon. Likewise, the actors are dressed bright and bold, from Tracy's blinding yellow coat to the Kid's red suit. Love interest Tess Pureheart (Glenne Headley) is decked out in forest green because she's earthy and works with plants; femme fatale Breathless Mahoney (Madonna) slinks around in black and lace because she's a creature of shadow. The clothes look exceptional. 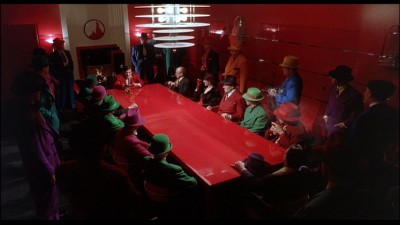 Even more striking, however, is the make-up effects used to make the bad guys look every bit as freaky as they do on the printed page. Beatty and his Oscar-winning team used prosthetics to give Little Face tiny features, Lips Manlis (Paul Sorvino) a wide mouth, and to completely bury Al Pacino under hair oil and bulbous attributes to play main gangster Big Boy Caprice. Pacino was nominated for an Academy Award for his performance, and it was much deserved. He really goes to town as the oversized outlaw. Like many comic book movies, the villain ends up being the most lively character in the piece. Beatty is stuck being the stand-up guy, always stoic, always doing the right thing; Pacino can rage and spit and toss his words toward the rafters. To do so under however many pounds of make-up and rubber is a triumph. Beatty, on the other hand, ultimately decided against altering his own features to take on Tracy's flattened nose, which was probably for the best; as it is, all the good guys, which include the great character actors Seymour Cassell and the late Charles Durning, look like regular people, setting them apart from the dangerous crooks they pursue. Like Batman's villains, Dick Tracy's rogues gallery is twisted by their own wrongdoing. The impulse of evil has distorted who they are.

In all fairness, while one can rave about the bravura technical achievement of Beatty's film, without all the effects, Dick Tracy would not be much of a movie. There isn't an original line, nor an inventive plot point, in the entire 106-minute running time. That doesn't end up mattering all that much. Beatty is intentionally evoking both the traditions of the comic strips and also early cinema, particularly the B-movies and cliffhanger serials. He gleefully indulges every hokey convention and cliché storyline with the hopes of inspiring the same awe in his audience, particularly the kids, that he likely felt as a child when he saw the original films he is saluting. It's the kind of thing that can be a real hoot if you go along with it. I recall not thinking much of Dick Tracy on it original release, but I've come to love it on home video, growing more and more affectionate toward it each time I watch it. It's a wonderment of visual fireworks, one that was well ahead of its time, and more impressive than much of what followed in its wake for how well Beatty used the comparatively primitive tools at his disposal. 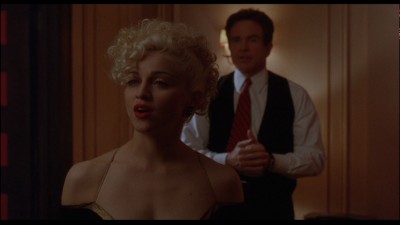 Video:
Dick Tracy was shot by master cinematographer Vittorio Storaro, the d.p. on such acclaimed films as Reds, The Last Emperor, and 1900. So, you know, even without all the razzle dazzle of the comic-strip sets, Dick Tracy was a movie that was going to look good. The studio does a pretty good job of bringing the widescreen (1.85:1) film to 1080p high-definition Blu-Ray, encoded as an MPEG-4 AVC. The colors, unsurprisingly, look fantastic, and there is a decent amount of grain that enhances detail and texture rather than covering it up. There are occasional instances of DNR smoothing out some surfaces (did Madonna have that in her contract?) and also hazy patches here and there where the background color flickers a little bit, but these are irregular and not persistent.

Sound:
In addition to Oscar-winning visual effects, Dick Tracy took home a statue for best original song for Stephen Sondheim's "Sooner or Later (I Always Get My Man)." Sondheim penned several tracks for the movie, which also has an effective score by Danny Elfman. All the music sounds excellent on the English 5.1 DTS-HD Master Audio mix provided here. The audio sounds really good when turned up loud, with lots of boom in the system when the action kicks in, and also a centered approach to the dialogue so that it never gets lost. I didn't notice a lot of background effects, but I didn't really notice the absence of them, either. Dick Tracy is well known as the first movie to have a soundtrack that was recorded entirely in digital, so it would only make sense that it would continue to sound so good now that digital has become the norm.

Alternate language options listed on the packaging are French in 5.1 Dolby and a stereo Spanish dub. There are also subtitle tracks in both languages, as well as English SDH. Once the disc loads, however, and you are prompted to choose a menu option, you will discover that there are also Russian and Portuguese choices, though the Portuguese is subtitles only.

Extras:
Outside of some recent Disney trailers, the only extra is a bonus disc that allows you to access a digital download via iTunes using a code printed on the paper insert in the case.

The BD case has a tray on each side, one for the movie and one for the digital disc. It also has an outer slipcover with the same imagery and information as the covers underneath.

FINAL THOUGHTS:
Highly Recommended. Though a bit hokey at times, Dick Tracy is a romp through classic newspaper comics, made to look like the funny papers come to life. Director and star Warren Beatty plays it straight, embracing everything he loves about comic strips and classic pulp, turning the old Chester Gould serial into a visual tour-de-force. Pushing Technicolor and what were then cutting-edge special effects to their outer limits, this 1990 film still holds up, looking wonderful in Blu-Ray. It seems to be the kind of movie that is begging to have a better package, one that is loaded up with special features, but until such a day, at least this Blu-Ray shows off the technical wizardry in a manner Dick Tracy truly deserves. 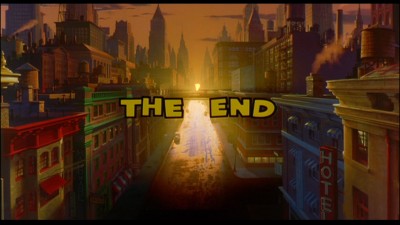