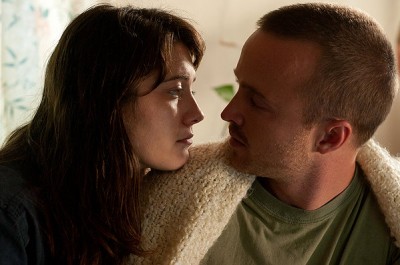 So, Ramona Flowers and Jesse Pinkman walk into a bar...

Sorry. Couldn't help it. It's not very clever, but it does actually give us our set-up. The new movie Smashed stars Scott Pilgrim love interest Mary Elizabeth Winstead and Breaking Bad's Aaron Paul as two young marrieds who like to party. A lot. To the point that things are starting to get out of hand for Winstead's character, Kate. While Charlie can mostly maintain, she keeps pushing past the point of reason. She is doing things like wetting the bed and puking in front of the her class of first-graders, going so far as to cover her hangover with a lie that she's pregnant. This is mortifying unto itself, but a few more bad nights and the obvious bad mornings that follow make Kate realize that enough is enough. When the school's vice principle, Dave (Nick Offerman, Parks and Recreation), confesses to similar problems in the past and shows Kate his AA chip, he offers her a way out. Kate stops drinking.

The rest of Smashed is an honest, if slightly anemic, examination of the recovery process. Writer/director James Ponsoldt, who knotted a fine twist on the father/son drama in Off the Black a couple of years ago, isn't interested in the melodrama of addiction or even making sobriety romantic. Part of his point is that life is not fun, and if you have to medicate yourself in order to make it fun, then you're doing it wrong. Pairing himself with two very good young actors, he goes about deconstructing a relationship that is as heavily dependent on liquid lubrication as the individuals are themselves.

This is the most interesting, and the most unique, part of Smashed: how one person's getting sober affects the other people in her life. Charlie keeps drinking, and that limits how he and Kate communicate. Ponsoldt and co-writer Susan Burke offer their characters some hard choices, and they do their best not to judge them when they make their decisions. This is not entirely successful. It's tough not to make the alcoholics in the 12-step program come off as self-righteous, and it's even tougher not to make the people who keep drinking look like assholes for doing so. Charlie gets the short end of the stick a lot, even when he's trying to do the right thing. 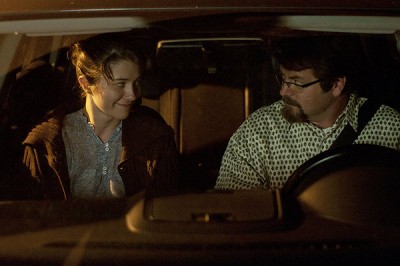 It's a problem that speaks both to the difficulty of trying to distill extremely complex subject matter into a concise drama and what feels like some internal confusion in terms of Smashed's tone. (Though after seeing how cavalierly Robert Zemeckis treated the problem of addiction in Flight, I appreciate Smashed's sensitive approach even more.) There are moments when the movie seems to be overtaken by the wrong impulse. The most egregious is how Offerman's character is eventually treated by the writers. For the bulk of the movie, he's a sympathetic guide and an extremely kind man. Dave develops feelings for Kate, which makes some sense, but instead of mining the situation for its inherent poignancy, the filmmakers turn it--and him--into a joke. Sure, it's a funny joke, but as an audience member, I felt cheated. It's a cheap laugh at the expense of someone we were asked to believe deserved better.

Nick Offerman does his best to weather the storm, and he mostly comes through. The comic actor does really well with the toothier material, developing that grizzled father-figure quality that is becoming his stock-in-trade. There are also good supporting performances from Megan Mullally, Mary Kay Place, and The Help's Octavia Spencer, playing Kate's AA sponsor. Aaron Paul also delivers solidly, but he's mostly establishing a sticking place around which Winstead can work. Hers is an interesting portrayal. Kate doesn't really know herself when she isn't blasted. This means she draws a blank in a lot of areas. Her final AA speech, as she starts to identify this aspect of herself, elicits an excellent expression of emotion from the actress.

James Ponsoldt, cinematographer Tobias Datum (Terri), and editor Suzanne Spangler (Holy Rollers) develop a loose, on-the-go style that edges toward docudrama, and though it services the realism of the piece, the film maybe would have benefited from a more rigorous dramatic approach. Being this light on its feet doesn't do Smashed any favors. The recovery story ribcage has already been picked clean, we need more meat in between those rickety bones. I don't know if there is much more to say about alcoholism and addiction that wasn't already said nearly seventy years ago in The Lost Weekend. Everyone does good work here, it's not a question of ability; Ponsoldt's film suffers from the monotony of his subject matter. It's a lot of "same shit, different night." I hate to say it, but watching Winstead stagger around a karaoke bar early on, I started to wish I was just as blitzed as she was. Because let's face it, drunks are only ever as interesting as they think they are when you're drunk, too. 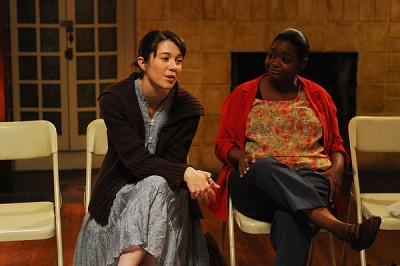