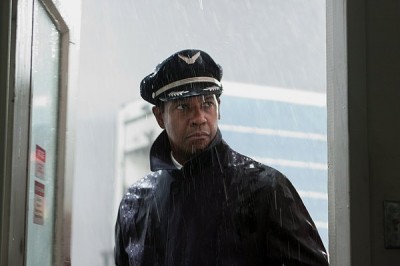 Robert Zemeckis' Flight does a tremendous thing: it manages to be both morally self-righteous and morally reprehensible at the same time, pushing a smug agenda while turning real-life problems into overly simplistic slogans, all to chase after some feel-good box office cash. It also has the funniest scene I've seen in a cinema all year. Near the end of Flight, Zemeckis zooms in on star Denzel Washington's eye to show a single tear rolling down his cheek. It's as if Washington's character is suddenly Iron Eyes Cody looking at a pile of trash on the side of the road. Except all that rubbish is his life.

Washington stars here as Whip Whitaker, a veteran pilot who went from the navy to commercial airlines. The über-confident airman gets his plane from one destination to the next as much on his belief in his own abilities behind the wheel as he does the fuel in his tank. The hot-shot super ego Whip carries around with him turns out to be justified, however, when his plane suffers a malfunction and only drastic measures will stop it from plummeting to the earth. Whip does the impossible, turning his jumbo jet upside down in order to stabilize it enough to glide to the ground. The maneuver works, and though the crash is still bad, with six lives lost, most everyone survives.

It's a harrowing sequence, unimpeachable as a gripping example of bravado moviemaking. If you leave Flight as soon as Whip opens his eyes in the hospital, you will depart the theater having seen an awesome short film. Stick around, though, and you're in for two more hours of slick gloss and insults to your intelligence. 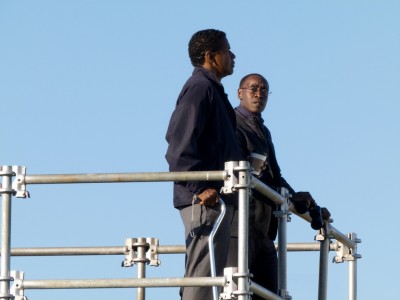 You see, for all intents and purposes, Whip is a hero. An extraordinary professional doing an extraordinary job. Except he did it while loaded on vodka and cocaine. This becomes a rather sticky part of an immense legal quagmire, as all the parties involved--the airline, the airplane manufacturer, the pilot's union--rush to try to make the other guy take the blame. Whip could be convicted of criminal negligence and charged with manslaughter. His union rep (Bruce Greenwood) brings in a high-priced lawyer (Don Cheadle) to troubleshoot for Whip, but Whip is his own worst trouble. He's an alcoholic that can't stay clean long enough to sell their version of the story.

Which is still all well and good. There's a great narrative there, a tale rife with ethical quandaries and complicated situations just waiting to be explored. Too bad Zemeckis (Cast Away, Forrest Gump) and writer John Gatins (Real Steel, Coach Carter) have no intention of engaging with the actual humanity of this piece in an honest way. Instead, they turn Flight into a stealth message picture, layering the script with coincidences and platitudes, each one designed to push Whip toward that single tear, the cheapest shot in a film that is the moviemaking equivalent of a sorority girl at a dive bar where ladies drink for free. 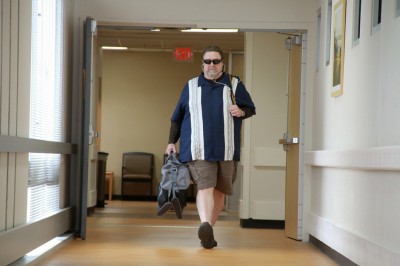 If you don't get where Flight is going as soon as Whip puts the flailing bird down in a church field where believers are being baptized, then two scenes later Zemeckis lays it all out for you. The Pacific's James Badge Dale arrives as a cancer patient with an explicit message for Whip: let go of the things you can't control, and accept the preordained fate the universe has for you. It's a terrible scene, like the leftovers from Tim Robbins' cameo in Spielberg's War of the Worlds, and its terribleness defines the rest of Flight. Also present for it is Nicole (Kelly Reilly from the Above Suspicion series), a heroin addict who is in the same hospital because she overdosed at the exact moment that Whip's plane was falling out of the sky. Just to make sure we know how bad her life has become--but how good she really can be--Zemeckis shows Nicole copping her smack on a porn set (but turning down cash to do anal!), dodging her perverted landlord (no sex for rent!), and (*shudder*) listening to the Red Hot Chili Peppers. Yes, a heroin scene set to "Under the Bridge," one of a legion of on-the-nose music cues that plague a movie that you already think can't get any more obvious. When Whip's drug dealer (an admittedly hilarious John Goodman) arrives? "Sympathy for the Devil." When Whip is wondering if Nicole is into him? Marvin Gaye just happens to be asking "What's Goin' On." When Whip and his legal team get on an elevator after a particularly surprising scene where they help him get coked out to take the edge off before his trial? A muzak "With a Little Help From My Friends." If you're worried you're going to miss a beat, don't; Zemeckis has a song to guide you. (Though, I'm wondering why "Spirit in the Sky" wasn't available?) 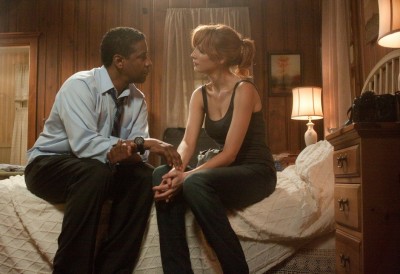 Nicole gets clean, Whip does not, and the rest of Flight is an endless loop of him getting drunk, telling everyone to go to hell, cleaning up, rinse, repeat. After each spiral down, he hits some rock bottom where someone is waiting to tell him how things are meant to be, there is a will greater than his, yada yada. This in itself is not a problem, except the movie ignores the reality of addiction, instead interpreting the Alcoholics Anonymous mottos literally. I mean, literally. Whip's last screw-up is almost supernatural in its spooky irony. Someone left open a window which in turn blew on an open door that banged against the connecting door in Whip's hotel suite allowing him to walk right through into temptation. Because, you see, if he doesn't fail again, he can't fulfill the plan! This is not how life works, folks, and this is not how good fiction functions either. 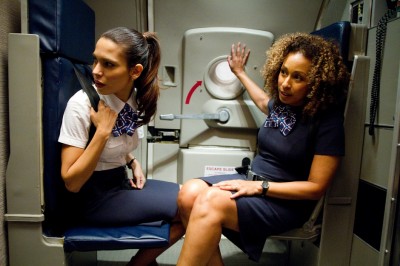 I don't know the particulars of how Flight got set up, but it seems like a lot of good people got duped into thinking they were making an important motion picture. Denzel Washington is in fine form. He is able to play a particularly unctuous human being quite well, trading on his own charisma in a way that makes Whip interesting, both seductive and repellant all in one go. Don Cheadle is also quite good, and he gets the only decent moment in the movie: the chance to finally tell Whip what a douche he really is. The film is photographed exceptionally well (director of photography Don Burgess was also behind the lens on The Muppets and Source Code), and musical choices notwithstanding, edited with panache (Jeremiah O'Driscoll, who also worked with Zemeckis on his creepy motion-capture films). It's enough to make you wonder why, on a project where so much hinges on asking why God let's bad things happen to good people, someone didn't have the foresight to say, "Yeah, like be in a stinker of a movie."

Of course, the answer to that is money. These people all did this because they thought there was money to be made (no sex for rent!), exploiting the feel-good territory that in previous holiday seasons was staked out by films like The Blind Side and The Help. And that's Flight truly major malfunction. It's far too cynical in its technique. It's overly calculated to strike every low chord it can to stir up the most box office. In doing so, the moviemakers belittle their own subject matter and ultimately belittle the audience they intend to shakedown. In other words, they're slipping you a placebo and claiming it's the primo goods, and they don't even have the good graces to be ashamed.

Or worse, Zemeckis really believes he is acting under some predestined directive. Which is a slippery slope I don't even want to even think about. The Polar Express is really a freight train of fate! 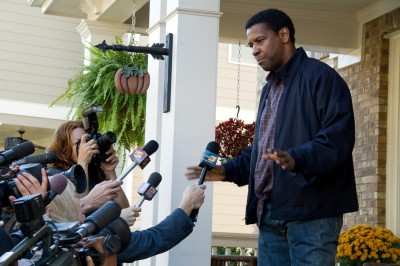