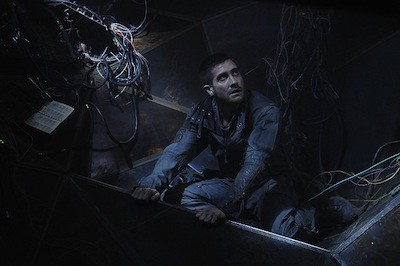 Colter Stevens wakes up on a moving train, completely confused as to how he got there. Last thing he remembers is piloting helicopters fighting the war in Afghanistan, he wasn't even in the States, much less anywhere near Chicago, where this particular locomotive is heading. The girl across from him thinks she knows who he is, but she keeps calling him Shawn, a bizarre tidbit that only gets more bizarre when Colter looks in the mirror and sees a different face staring back at him. He tries to sort out what is happening to him, but before he can, the train explodes.

Next thing Colter knows, he's waking up again, but this time in some kind of capsule. He is greeted by a face and voice talking to him through a computer screen. Colter is on a military mission to try to identify the terrorist who blew up the train, as it is believed that it's only a matter of time before he or his group will launch a larger attack. Colter is in the Source Code project, a convoluted combination of quantum physics and metaphysics that allows him to travel through an echo in time for eight minutes every session. He is not changing the past, but he is reliving it--over and over until he gets it right.

This is the basic plot of Source Code, the new movie by Duncan Jones, the man who made the surprising and wonderful Moon a couple of years ago. It's an idea surprisingly easy to distill into two short paragraphs without giving too much away, leaving plenty for moviegoers intrigued by my description to discover on their own once they've decided to go along for the ride. Source Code is like a really awesome episode of the classic Twilight Zone series, using fantastic plot contrivances as stimulus for its characters. It's not about twist endings or strange stories, but rather, the human condition. How do these people react when faced with an unbelievable happening? How does what's going on reflect on them as individuals?

Jake Gyllenhaal plays Colter Stevens, and it's a good role for him. He is an actor with a believable physical presence but who can also still achieve an everyman quality. We can buy him as a man of action, but also the type of guy who might be more concerned with figuring out his situation and looking for ways to enjoy more time with the pretty lady who is flirting with him. Christina is played by Michelle Monaghan (Due Date), a girl who can't understand why her friend Shawn is now acting so weird. Seeing her die every eight minutes plays tricks on Colter's head and wanting to find a way to save her puts him off mission. It's up to Goodwin (Vera Farmiga, Up in the Air), the woman on the webcam, to keep him on track. Colter is having memory trouble, and so the question of whodunit is not the only mystery he has to solve. He is also trying to piece together how he got this mission and what is really happening to him. 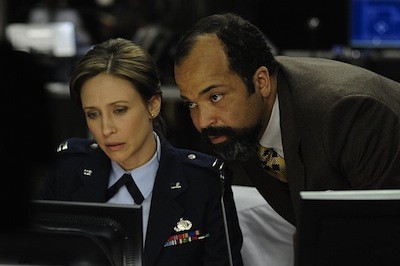 The script for Source Code is by Ben Ripley, who wrote the later entries in the Species franchise. His story here is one full of expertly timed revelations, carried on the back of endless plot wrinkles and a whole school of red herrings. Exposition comes in chunks, sandwiched in the periods between jumps. Some is delivered by the steady voice of Goodwin, whom Farmiga imbues with a shaky professionalism, but the more scientific elements are delivered by her boss. Jeffrey Wright (Broken Flowers) plays the higher-up with a sinister quirkiness that goes maybe a little over the edge of reason at times. He's kind of hammy in a movie that otherwise holds itself back really well, and I found myself falling in and out of love with the actor's performance as Source Code progressed.

For his second feature, Jones avoids getting too ambitious. Whereas other directors try to show off for their sophomore effort--for instance, Richard Kelly going from Donnie Darko, that other time-traveling Jake Gyllenhaal vehicle, to the oversized mess Southland Tales--Jones instead has made a tightly wound, efficient thriller. Source Code moves step by step, with each successive run through the scenario giving the film its shape. I almost wish I had gone in with a stopwatch and checked each scene on the train. Were they really all just eight minutes long, or some other approximation of that figure?

Source Code has much in common with another recent release, the Matt Damon picture The Adjustment Bureau. Both have men driven to action by a shadowy organization, and both have a central romance that takes over the protagonist's motivations. For as fun as The Adjustment Bureau was, Source Code is a better picture. It has an airtight insularity and it also digs deeper into how Colter's developing feelings for Christina influence his decisions. It's not just a matter of a guy wanting a particular girl, Source Code ponders how caring for one person can lead to having great compassion for many. Colter transforms into a hero when he stops thinking about how he got there and starts taking the lives of everyone on that train seriously.

I suppose there are some out there that might be disappointed in Source Code. I am not sure if it's better or worse than Moon (or even the same), but it's not as surprising or as creatively daring. (Nor does any actor here approach the level of Sam Rockwell's performance, despite how good they all are.) I honestly don't think that should matter. Source Code is a solid piece of entertainment, and it confirms that Duncan Jones is a real talent to watch. Source Code shows he has a lot of different muscles that he didn't really get to flex in his debut. That he got to show them off without discarding the clever manipulations that made us like his work in the first place is all the better. Jones can go anywhere from here, and I will be sure to follow. 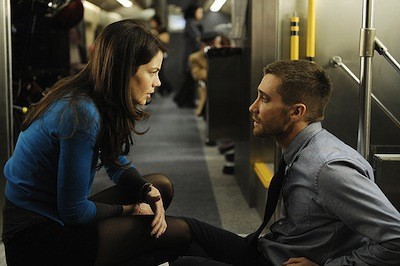