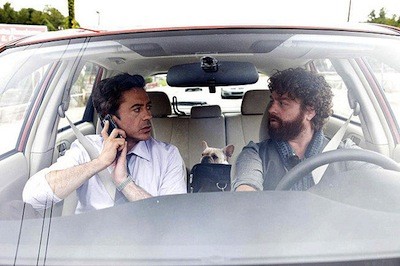 There may be nothing more frustrating than an uneven comedy.

Due Date is the new film from Todd Phillips, director of The Hangover. It reteams him with Zach Galifianakis, who was one of the biggest reasons that movie was so funny. I guess thinking audiences can never have too much of a good thing, Phillips decided to take his standard formula--guys on the road encountering mishaps--and pare it down to make it a pure Galifianakis vehicle. I think this is what they mean by "the law of diminishing returns." Due Date is funny, but it's debatable whether it's funny enough.

Robert Downey Jr. stars alongside Galifianakis. He plays Peter, a go-getter with anger management issues. Peter runs into Ethan at the Atlanta airport--or more accurately, Ethan runs into him. The guy dropping Galifianakis' reality challenged character off for his flight slams into the door of Peter's town car. Ethan apologizes, but it's only the beginning of the terrible things that will befall Peter as a result of this new presence in his life. Peter is on his way home to California, he only has a couple of days before his wife (Michelle Monaghan) is due to deliver their first child. The plan to get back goes haywire, though, when Ethan talking about terrorists and bombs on the plane gets both of them kicked off and put on the "no fly" list. Peter's luggage takes flight without him, and so he is trapped without money or ID. Solution: tag along with Ethan and his masturbating dog in their rented car.

Yes, Due Date is a movie with a masturbating dog. Let's put that out there as the lowest low this comedy hits. There is something midway through the movie, occurring outside of a Texas emergency room, that Robert Downey Jr. does to that dog that is one of the most surprising acts of brutal comedy I have seen in a movie. We'll call that the high. (Don't worry, he doesn't actually hurt the dog.) The rest of Due Date falls in between those two gags, and includes long lags between laughs. Never long enough that you'll want to get up and leave, but sometimes they cut it close. 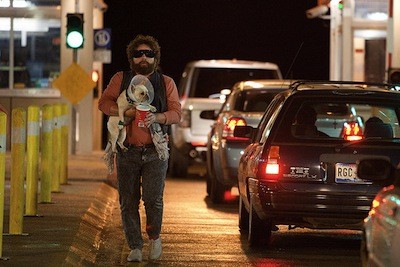 I don't know if there is a name for this particular genre for comedy, but Due Date is essentially one of those movies where one character is the chaos bringer and sends the other character, the straight man, careening off his chosen life path. We saw a similar move in Dinner for Schmucks this past summer, though Galifianakis goes for an odder tone than Steve Carrell's cartoonish pest. He's also not nearly as genuinely lovable as John Candy was in Planes, Trains and Automobiles, a film Due Date bears more than a passing resemblance to, we have to be cajoled into feeling anything for him. Ethan dreams of being an actor, and he's going to Hollywood to honor his recently deceased father, whose ashes he is carrying around in a coffee can. It's an important detail, because Phillips and his army of screenwriters (there are three, in addition to himself) use that to create a thread of false sentiment throughout the movie. It's why Peter won't ditch the loser, and why we're expected to keep watching. Naturally, the writers are going to take the story to that predictable place where these guys become buddies. It's a mistake, the funnier stuff is when Peter unleashes on the bastard.

In fact, it's Robert Downey Jr.'s white hot anger that propels Due Date, and as he calms in the final half hour, the movie also slows way down. His performance is a series of slow burns working up to seething fury, and then back down again. He unleashes in unexpected places--a little kid takes it worse than the dog, actually--and were this a movie by Jody Hill or someone with equally dark sensibilities, there would be no kissing and making up. Galifianakis plays off this energy really well, largely by scaling back with Ethan and not overselling it. It's his forte, dropping that killer play on words in such a small way, you almost don't catch it the first time. Due Date is a comedy where the performers are better than the material, and had lesser actors been cast, there wouldn't be much to go on here at all.

Some of the other really funny scenes involve strong cameos. Jamie Foxx has a brief appearance as Peter's best friend, but he clearly owed someone a favor, because it's a nothing role (maybe he lost a bet on the set of The Soloist). Far more memorable are RZA as an airport security guard and Danny McBride as a Western Union agent. A road trip movie is only as good as its pit stops, and these guys make at least two of them memorable.

If I had to put a number on it, I'd say I laughed slightly more than half the time I was supposed to, and I guess that's a pretty decent number. I was certainly entertained, and though the movie felt long even at a short 100 minutes, I had a decent time. Due Date wouldn't be a bad bargain matinee, it's got enough good jokes for that, but not much more. For that matter, you might be better off saving it for some Tuesday night in, when it's on DVD and you can enjoy it with your favorite snack and adult beverage. In other words, think before you get in front of that screen, and watch responsibly.