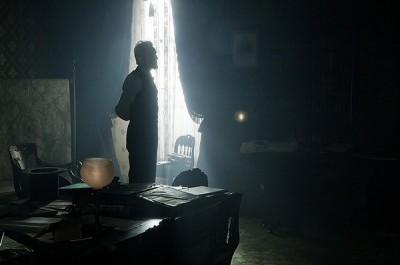 Sometimes a writer freezes at the outset. It's not writer's block, it's not the mythical "fear of the blank page." It's just there is no one clear way to get going. It reportedly took Steven Spielberg twelve years to bring Lincoln to the screen? He didn't know where to start, and neither do I. And though I doubt I'll end up in any place even remotely of the same quality as his film, I'll do what Señor Spielbergo eventually did and just get going.

There have been many Abraham Lincoln films recently. In this one, he doesn't fight the undead, nor is it about the men who killed him. Lincoln is about the man himself, as portrayed with the usual uncanny transformational skills by Daniel Day-Lewis. It is not his life from start to finish, not a biopic of scope and sweep that crams too much into too little and belittles all (imagine the scene of eight-year-old Abe seeing a slave being whipped and hearing his dad say the phrase "four score and seven years ago" and having an epiphany!). Instead, Spielberg has chosen to focus on a specific chunk of time: the months between the 16th President's re-election to a second term and his passing the 13th Amendment of the Constitution, abolishing slavery once and for all. Outside of a coda that shows the end of the Civil War and, yes, the eventual assassination of the President, Spielberg stays in that timeframe.

The result is a rousing story of political gamesmanship and blind belief. Based in part on the book Team of Rivals by Doris Kearns Goodwin (one of my favorite Daily Show guests), the script by Tony Kushner (Angels in America, Munich) is like an extended episode of The West Wing: 19th Century. It's got a lot of walking and talking, some speechifying, a little comic relief, and various scenes of the President being both a family man and a human being.

Assisting Lincoln in securing the votes in the House of Representatives is a veritable who's who of character actors from film and television: David Strathairn (Good Night and Good Luck) as Secretary of State William Seward; Tommy Lee Jones as the head of the radical Republicans; James Spader, Deadwood's John Hawkes, and O Brother, Where Art Thou's Tim Blake Nelson as special lobbyists hired by the White House; A Serious Man's Michael Stuhlberg, Justified's Walter Goggins, and Lee Pace from The Fall as various congressmen on the other side of the aisle; Sally Field as Mary Todd Lincoln and Joseph Gordon-Levitt (Looper) as their eldest son--I could go on down the whole page listing people. There is not a bad casting choice in the bunch, not a single off-note in terms of performance. Spielberg has made the right move here: when your film hinges on a single person, give him a strong support foundation for doing his work.

Because this is really Daniel Day-Lewis' show. His performance here teeters close to the edge of caricature, but he holds back, instead playing President Lincoln as thoughtful, pensive, charismatic, and, at times, funny. He is portrayed as an amiable storyteller, stopping meetings dead to tell a tale of Ethan Allen, much to the consternation of some of his colleagues. He is also shown as a doting father with his youngest son, Tad (Gulliver McGrath, Dark Shadows), and of course we see his contentious relationship with his wife. Sally Field is the only performer who really goes toe-to-toe with the leading man, and the scene where they have at each other is one of the best in the film. Field also has a sequence where she gets to tame Tommy Lee Jones with much softer, but sharper, words; it's the kind of bravura supporting actress work that steals Oscars.

In addition to the strong writing and acting, Lincoln is just an incredibly well-made film, put together with the kind of technical finesse and penchant for old-school storytelling that no one really does like A-Game Spielberg. The narrative is so carefully constructed, and the details so meticulously considered, it's as if he transforms the movie screen into a window through time. Cinematographer Janusz Kaminski, who has shot the majority of Spielberg's films since Schindler's List in 1993, appears to be working if not entirely with real light sources, then at least some incredible simulacrum thereof. Candles flicker, shadows obscure faces, sunlight blinds--much of Lincoln looks like an oil painting from the 1800s. Spielberg's compositions and his choreography also appear to borrow from the period. The energetic congressional debates look like old newspaper drawings come to life.

Lincoln is not a film without its flaws. Since it's Spielberg, there are some cheesy moments, including a finale that does push the reverential buttons a little too hard (especially that fade through candlelight). Occasionally, characters are given lines of dialogue that are too self-referential, that seem to carry the knowledge of history, as if Kushner didn't trust us to understand their place within it. These, of course, pass, and they do little to mar the film's otherwise masterful execution. Watch this one back-to-back with John Ford's Young Mr. Lincoln if you can. It should make for a stirring double-feature come next Fourth of July.

Hey, maybe that's what took Spielberg so long to find his story and bring his film to fruition: Ford already covered the first act, and sometimes the third is the trickiest. Rest easy, sir, by all evidence, you got it right. 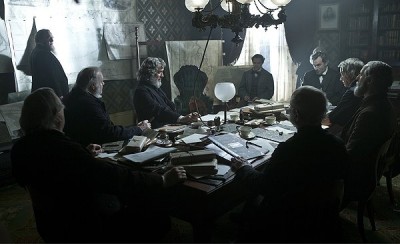