"Under certain conditions, fear will come to any man. It's always there, waiting for us..." 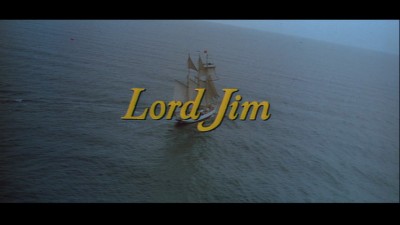 In fiction writing, there is a thing called the "inciting incident." In short, it's the event in the story that causes all that follows to occur. In Lord Jim, writer/director Richard Brooks' 1965 adaptation of the turn-of-the-century seafaring novel by Joseph Conrad, that one incident becomes the inescapable standard by which the main character is judged for the duration of his tale.

Jim is played by Peter O'Toole, who is buttoned up for most of the picture, a personality waiting to be unleashed. Jim is a sailor with noble bearing, well liked by his crewmates and his captain, known for acts of bravery. After an injury, however, Jim ends up on a less-than-reputable boat. During a particularly brutal storm, Jim joins the rest of the crew in a lifeboat, leaving eight hundred Muslim passengers, who had hired the vessel for a pilgrimage, to drown. When the ship survives the weather and its clear the danger was not all that the runners had assumed, Jim is branded a coward. To do penance, he buries himself in work, not necessarily seeking a second chance, but just trying to get along.

Nevertheless, a second chance comes. Jim foils an act of sabotage and saves many from being hurt when a small boat carrying gunpowder is set ablaze, earning him the trust of the boat's owner, an importer/exporter named Stein (Paul Lukas). Stein intends to send supplies to a group of East Asian rebels looking to overthrow the oppressive yolk of an imperialist miner (Eli Wallach). Jim undertakes the mission, determined to do something good. If he fails, a whole people will be crushed.

Conrad has always been a difficult prospect for film adaptation. Orson Welles failed to get his version of Heart of Darkness off the ground (thus making Citizen Kane instead), while Francis Ford Coppola folded the same book into his Vietnam epic Apocalypse Now, succumbing to the madness of the narrative himself while trying to bring it to life. Lord Jim was previously adapted as a silent film in 1925 by director Victor Fleming, and though I can't say for sure, not having seen it, he might have had a better time of it since he would not have had to labor under the thumb of Conrad's overflowing vocabulary. Florid language is a huge part of the author's appeal, and Brooks struggles to bring that quality of Lord Jim to the screen, both in terms of on-screen action and general writing. Dialogue about "sunken ships" and "jumping out of harm's way" lands with heavy, obvious thuds. The first half hour of the picture is taken over by a rushed montage that largely relies on voiceover narration to introduce us to Jim and his history. This creates a distance between us and Jim, and it's hard to say if it's by accident or by design. We barely know him at all when he undertakes his redemptive mission, and the effect isn't suitable enough to make him mysterious, it just dulls the viewer's interest. 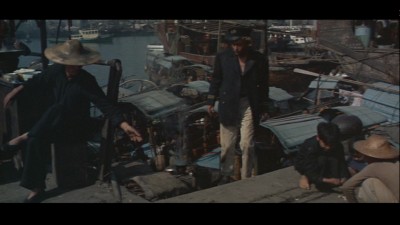 Richard Brooks was already no stranger to literary adaptation, having made Elmer Gantry and other such films by the early 1960s (it would still be a few years down the road before he would artfully turn Truman Capote's In Cold Blood into his best-known movie). Even so, it seems like Joseph Conrad got the better of him. Brooks is trying to capture the duality of Conrad's work, the internal versus the external: man's soul is often exposed when he is out in the elements. Unfortunately, the director's strong suit here appears to be the outside forces. Lord Jim's voyage requires a large staging. The shipyards and the ocean cruisers are of an impressive size, allowing Brooks to show how small man is when placed against the backdrop of the open world. Cinematographer Freddie Young (Doctor Zhivago) works with extremes. In some shots, O'Toole is shown up close in the foreground, his ship and cargo extending out behind him; in others, such as when he rides the crane in port, floating from one ship to another with the cargo, he is just a tiny piece in a much larger ecosystem.

Lord Jim picks up the pace once Jim is in the Cambodian jungle. He suffers under the hands of Eli Wallach, but manages to survive a torturous interrogation and lead the slave rebellion. The fighting is actually pretty exciting and the ways Jim mobilizes the indigenous people and creates a defense that makes up for their being outnumbered makes for a rather good battle sequence. It's due to this new allegiance that Jim is named a "Lord." There is obviously a pattern in Joseph Conrad stories; Jim's disappearance and transformation in the wilderness is not dissimilar to Marlowe's in Heart of Darkness. Once the first villain is vanquished, a new one steps into the void. James Mason as Gentleman Brown hears about the power vacuum and comes looking for Gold. Unlike O'Toole, Mason appears on the scene as a fully realized character. He is a scoundrel with depth, both cagey and sinister. The one-on-one segment with the two stars negotiating a possible peace is the best in the movie.

This late arrival of the storytelling cavalry ends up causing Lord Jim to be a bit lopsided, but in a way, that's good news. It means you'll enjoy it more the longer you stick with it. The ending of the picture also brings Conrad's bleaker themes to their payoff, finally fusing the events of the story to Jim's melancholy philosophizing. His metaphorical ship may sink, but at least he's letting it happen and not spending his time telling us about it. 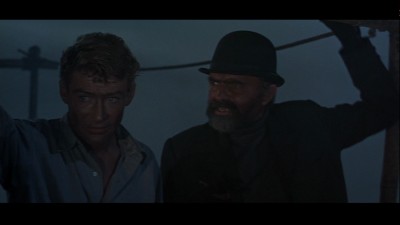 Video:
Released through the Sony Choice Collection, the manufacture-on-demand label, Lord Jim has been put on DVD without any bells or whistles, and thus without a full restoration. The source print used for the disc is thankfully pretty good, and though colors might appear muted at first, as the film carries on, it appears that this is an intentional choice by Richard Brooks and Freddie Young. The Lord Jim story is not a bright one. That said, the resolution could be sharper. There is a lot of detail in the movie's many large set pieces, but a lot of that careful design is lost due to a mediocre mastering job.

Sound:
The unadorned mono mix sounds just fine, with no problems in terms of hiss, distortion, or crackles and pops.

FINAL THOUGHTS:
Recommended. It's probably not the best compliment for Richard Brooks that his adaptation of Lord Jim made me really want to read the Joseph Conrad novel the movie is based on, but I can tell there is a better story beneath the movie's stutters and stops. Or, if Brooks' screenplay stays true to the author's outline, then a better-told version of it. Peter O'Toole is a grower not a show-er as the main character, a sailor whose one time succumbing to fear and the potential harm that personal failing could have caused haunts him to the point of distraction. He spends the first third of Lord Jim wandering, which leads him to his second chance in the Cambodian jungle. It's there that the movie starts to come together, and then it finally picks up full steam with the addition of James Mason as the villainous Gentlemen Brown. It's slow going, particularly at the outset, but Lord Jim is ultimately worth it. 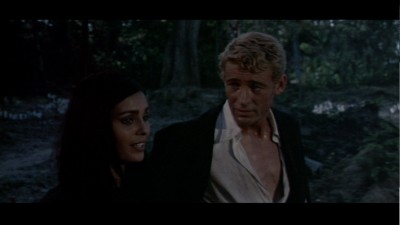