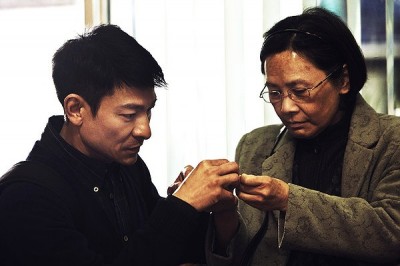 It's rare to find a film as sincere and assured in its emotional intent as Ann Hui's celebrated A Simple Life. The 2012 Chinese award-winner is disarming in its lack of affectation, and Hui, along with writers Susan Chan and Yan-lam Lee, stir emotions without an over-reliance on maudlin sentimentality or easy nostalgia. Plenty of heartstrings are tugged, but they are more like the wires of a finely tuned piano than the tin-can strings of the cheeseball ukele we expect most "feel good" films to be. One can only clear the tears from one's eyes and quietly applaud such a marvelous effort.

A Simple Life stars veteran actress Deannie Yip as Ah Tao, a maid who has worked for the same Hong Kong family for sixty years. Most of them have moved to America, but she still lives with and looks after their youngest son, Roger (Andy Lau from Infernal Affairs), a production designer working in HK cinema. (Tsui Hark, Sammo Hung, and others make appearances as themselves to lend some realism to the background.) The demands of Roger's job means he comes and goes regularly, but Ah Tao maintains a routine. She is a well-liked, familiar sight in their neighborhood.

Life takes a turn, however, when Ah Tao has a stroke. Though Roger offers to get some kind of in-home care for her, she insists on moving into a nursing home. The majority of A Simple Life's first half is devoted to her getting used to this change in living conditions, including adjusting to the quirks of her fellow residents. Amongst them are certain types--a roguish charmer, an aging teacher, a woman who refuses to believe that her son is less than she imagines him to be--but Hui has a cautious, observant eye, and she avoids letting even the most minor characters slip into caricature or parody. As Ah Tao settles and recovers, these folk become her new neighborhood. They become familiar, and even endearing.

Central to all this is Ah Tao's relationship with Roger. She was more responsible for raising him than his own mother (whom we later see is pushy and a bit out of touch), and Roger feels indebted to her. He visits regularly, and not just out of habit or duty. In a way, the change in roles brings them closer. He isn't exactly her caretaker, not in an everyday sense, but their time together is no longer dependent on her cooking his dinners and cleaning his clothes, either. As A Simple Life progresses, they become more talkative and laugh with increasing regularity. These sequences are sweet and moving. Andy Lau plays Roger quietly and humbly, adopting the role of doting son with the appropriate reserve. His performance is that of listener and companion, and the actor generously clears a space for his co-star to find the authenticity of her character. Deannie Yip's portrayal of the aging servant is startling in its raw simplicity. If there is ever a Hollywood remake, the actress playing Ah Tao would surely go chasing after an Oscar, particularly as the elderly woman's body fails her. Not so in A Simple Life. Old age is depicted with grace and dignity. The effects of the stroke take over gradually, and Yip prefers subtlety to exaggeration.

The same could be said for Hui's direction. The mantra on set could have easily been, "Keep it simple, stupid." There is a casualness to the presentation that allows A Simple Life to maintain emotional integrity throughout. I never felt manipulated by the film, never detected an authorial hand trying to nudge me toward an expected reaction (unlike, say, that other lauded film about aging and dying, Amour). On the contrary, the heavier moments sneak up on you, as do the lighter times. If she has a stagey impulse, Hui never succumbs, not even in the ending. The inevitable is allowed to happen without fanfare, without any mawkish hue and cry. Instead, the filmmaker quietly turns out the light, closes the door, and allows her film to exit elegantly into the good night. 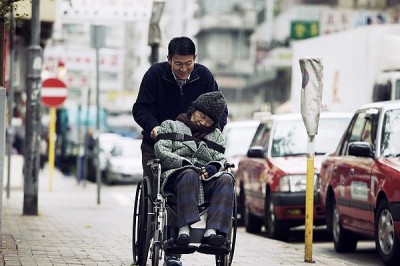 Video:
I've only seen a couple of Blu-Ray discs from Well Go USA, but I'm finding their releases to be some of the more impressive on the market, particularly from a smaller distributor. The 1080p transfer of A Simple Life is flawless. Resolution is sharp, colors are nicely balanced, and detail is incredibly rich. Ann Hui and cinematographer Nelson Yu Lik-wai (Dream Home, The World) shot the film in digital, giving A Simple Life a lighting scheme that is both natural and modern. That is rendered with remarkable clarity here, maintaining the integrity and mood of the original artistic intent.

Sound:
The original Cantonese language soundtrack is given a full 5.1 DTS-HD master audio mix. It sounds amazing, with lots of atmosphere working through all the speakers. Quiet moments are given the right amount of ambience, making the silences as resonant as the louder sequences (such as the New Year's fireworks that woke up my cat).

The English subtitles are mostly good, with some minor typos here and there and a few instances of maybe being too fast.

Extras:
Only the theatrical trailer.

FINAL THOUGHTS:
Highly Recommended. It would be easy to say that there couldn't be a more fitting title for this film than A Simple Life, but that's to allow the lack of adornment into fooling you that this effort from Chinese director Ann Hui isn't rich in life's complexities. Starring Deannie Yip and House of Flying Daggers-leading man Andy Lau as an aging maid and her god son, A Simple Life shows the effects of old age with a stark clarity that creates an emotional truth without resorting to grandiose plotting or fervent swells of expression. Instead, Hui portrays two people carrying on with life in times that are both difficult and wonderful, making for a film that is both of those things in spades. 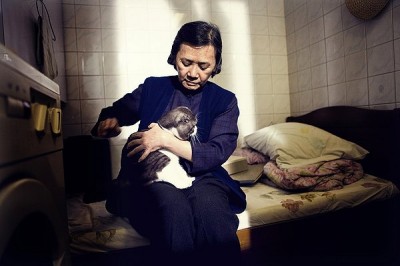