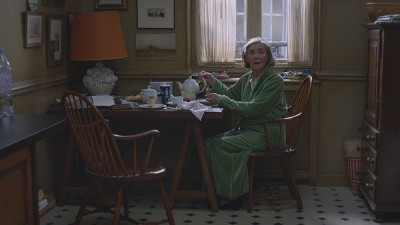 German/Austrian director Michael Haneke has become notorious for making films that are, essentially, extended meditations on discomfort, in which the lives of his fictional characters are marred by unspeakable violence and the minds of the audience are jarred by self-reflexive story twists. Films like Funny Games, Cache, and, most recently, the acclaimed The White Ribbon all definitely fall into that clichéd love-it-or-hate-it pigeonhole. I generally find it hard to discern whether or not Haneke has a legitimate point to make, or he just enjoys screwing around. We are the flies, and he the vicious schoolboy plucking at our wings.

And so it's with pleasure that I can say the biggest surprise of all in his new film Amour is that there is no big surprise at all. The con man has put away his shells and left all of his secrets exposed. It makes for a powerful drama, one that has rightly been topping many critics' polls and gathering up awards, including a Golden Globe for best foreign film.

In essence, Amour is the final stage of a love story, the tail end of a lifelong romance. Most films about love deal with the initial rush of emotion, when cheeks and hearts burn hot, with that thing that has been termed, most horrendously, as "meet-cute." (Whoever came up with that term needs to end up meeting the cute side of my foot.) Haneke's film is as far away from first-date territory as one can get. It doesn't even wallow in nostalgia. There are no rote scenes of parents telling their kids of how they fell in love. Amour is, instead, trapped in the here-and-now of old age. 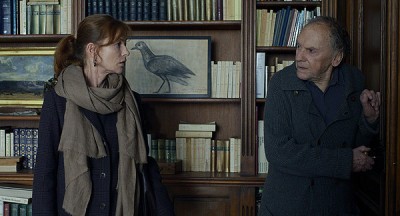 Esteemed French actors Jean-Paul Trintingnant (The Conformist, Three Colors: Red) and Emmanuelle Riva (Hiroshima, Mon Amour) star as Georges and Anne, married senior citizens, former music teachers, now retired. As the movie opens, they are returning from seeing their most accomplished pupil (Alexandre Tharaud) performing in concert. They are on a high, so much so that they don't even let the fact that there is evidence someone tried to break into their apartment bring them down. It's a none-too-subtle omen. Their lives are about to be invaded by circumstances they can't control.

The following morning, Anne suffers a stroke that leaves her right side mostly paralyzed. She returns to their apartment for in-home care, and makes Georges promise to never send her back to the hospital--a vow he stands by, even when their daughter (Isabelle Huppert, White Material) tries to sway them to look for an alternative. Taking care of his wife is going to be tough on Georges, and his responsibilities will only increase as her condition worsens. He's prepared to take on the challenge, however, because that is what life partners do for one another.

I know that, based on the synopsis, Amour sounds like a bit of a downer. I'm not going to lie, that's not entirely wrong. There is not a lot of joy to be found in watching an old man take care of a dying old woman, spoonfeeding her and changing her diaper, while she cries out in distress that may or may not be real. The impressive thing about Amour is that Haneke, who writes as well as directs, manages to avoid making a serious exploration of grief seem oppressive. The subject is heavy, but the film rolls along rather lightly. Haneke eschews any gross physical details and never lingers morbidly on the damage illness is causing Anne's body. Nor does he indulge his performers to treat the difficult material as a flashy showpiece. Emmanuelle Riva is remarkable. As Amour progresses, Anne's body essentially closes in on her. She can barely move and speech becomes increasingly elusive. Riva's portrayal becomes more and more astonishing the less she has to work with. The pain she conveys in the final scenes are unnerving.

For his part, Jean-Paul Trintingnant is a rock, maintaining a composed outer appearance while still managing to wrestle with the deeper internal struggle. Haneke's script confronts all the complexities, all the conflicting emotions, including the selfish impulses that are unavoidable even during selfless action. Illness locks these two lovers in their nest, where they struggle to define a dignified end and keep outside interference at bay. It's a look at old age that we rarely see in movies. These are not randy grandparents popping Viagra and chasing each other around the pool, but real people making the best of what time they have left, even when everything is at its worst. Amour builds toward an inevitable conclusion, and when it gets there, Haneke delivers it quietly, without comment, but to great effect. 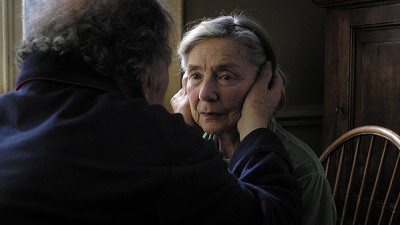