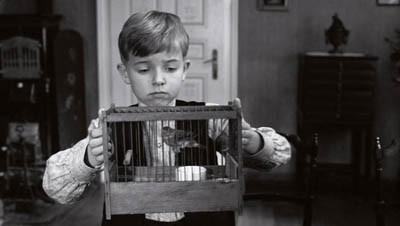 Some movies can be frustratingly elusive, proving hard to assess upon first viewing. The White Ribbon, the new film from German director Michael Haneke (Cache, Funny Games), is just such a film. It was a pleasure to consume, and its aftertaste is haunting, a trace of spice I can't erase. A phantom itch I can't scratch. In other words, The White Ribbon is a movie I liked, but I can't exactly get at why.

The story of The White Ribbon is set in a rural village in Germany in the year prior to World War I. The locals live a fairly simple, bucolic existence. The Baron (Ulrich Tukur) and his wife (Ursina Lardi) are the primary landowners, employing most of the populace in their fields. The village children are educated at the town school, their teacher (Christian Friedel) is kind and youngish. The local pastor (Burghart Klaußner), on the other hand, is old and stern. On the surface, everything is in its place, the system works, but underneath, things are starting to rot. One summer, two accidents cause the village some alarm. First, the town doctor (Rainer Bock) breaks his collarbone when his horse is tripped by a nearly invisible wire that someone has strung between two trees in his backyard. Two days later, an older woman in the town falls to her death working in the Baron's mill. The tragic events are unrelated, but the anger and the unease they create amongst the people end up tied together. These feelings of dread are fomented by other strange happenings, including the Baron's young son, Sigi (Fion Mutert), being kidnapped and beaten. Something is definitely amiss.

Haneke builds his community slowly and carefully. Each family and individual has a place in the social structure. Each serves a purpose, and they all get their own stories. The teacher develops a crush on the young nanny Eva (Leonie Benesch), whose job is threatened by the suspicious goings-on. The doctor eventually returns from the hospital, but his house has been disturbed. His son has learned about death for the first time, and his daughter (Roxane Duran) has tried her best to keep things together with the help of the midwife (Susanne Lothar). The midwife has been having an affair with the doctor, who treats her cruelly, and her developmentally disabled son Karli (Eddy Grahl) is the next child to be victimized. When he is found, there is a note claiming that the sins of the older generation are being visited on the younger. There is certainly ample enough evidence that the adults can be cruel. The doctor has his secrets, and the pastor is a harsh disciplinarian. The title comes from his practice of making his eldest children, the teens Klara (Maria-Victoria Dragus) and Martin (Leonard Proxauf), wear white ribbons as reminders of their offenses, only removing the ties when he believes they have redeemed themselves of sin. 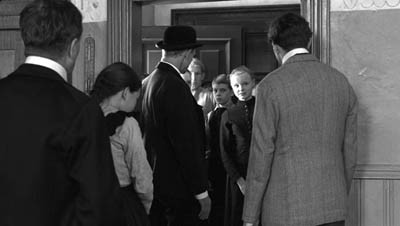 The White Ribbon was shot digitally in color, and then converted to black-and-white. The process creates an amazing contrast in the images. The whites are very white, and the blacks are deep and dark. Haneke teases images out of the darkness, fire emerging in the blackest night like a dangerous omen. Static shots of the town at rest suggest life that is in stasis, waiting for a change. The director also employs silence as an effective tool. There is no music in the movie that isn't played live in the scene. His opening and closing credits have no sound at all. The absence of noise is deafening.

There is also a feeling that everything that is happening is part of some sinister destiny. The teacher narrates the story from a distant future, reflecting back on events with a neutral nostalgia (the voiceover is performed by Ernst Jacobi, not Christian Friedel). As one of the only characters in the village who doesn't have family there, he represents the objective outsider and the closest thing we have to a focal point in the story. He is usually there when something goes wrong, as he is regularly the mediator between the children and the adults. Just as the parents can be less than kind, their offspring are also not very innocent. Klara and Martin lurk about with sinister intent, with the girl in particular looking like she just stepped out of The Village of the Damned. Many of the local boys are angry and possessed of a sense of entitlement. Sometimes they lash out, taking back what they perceive to be theirs.

The White Ribbon is essentially a rich character piece with a mystery at its center. The only problem is, it's a mystery that is never solved. We are presented with some theories as to what is happening, but at the same time, other developments obfuscate the potential solutions even further. The assassination of Archduke Ferdinand and the onset of World War I acts as a kind of deus ex machina, diverting everyone's attention and burying whatever happened under the refuse of history. This leaves us to puzzle out what it all means. Is this some kind of metaphor for the changes Germany will be going through in the coming decades? New generations genetically encoded for enhanced cruelty by the hypocrisies of their forefathers? Haneke has earned a reputation for having trick endings, so is this some sort of reverse twist? The trick is that there is no great revelation?

When we left the screening of The White Ribbon, my regular movie buddy likened it to the kind of pointless stories older family members often tell. They are really interesting, but they end up going nowhere, leaving us to wonder why grandpa told the tale in the first place. As she pointed out, The White Ribbon is narrated by an old man, and his final pronouncements include statements to the effect of "And we never spoke of it again...." It's hard not to feel a little cheated by the prospect of Haneke having spent nearly two-and-a-half hours setting the stage for...nothing.

Yet, I'm not ready to declare that as being the point just yet, not on just one viewing. It's what I mean about the film being elusive. The White Ribbon definitely effected me, it moved me to immerse myself in these lives and to invest in what was happening. The question is what kind of payoff Michael Haneke wanted me to take from that investment. Life is often about unanswered questions, and the solution may be that simple: the director just wanted to get under my skin so I might feel that itch I can never quite calm (that is kind of his schtick). It's been some time since The White Ribbon ended, and I'm thinking about it still. The question mark just hangs there, waiting to be untied. 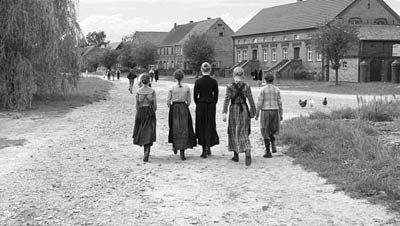