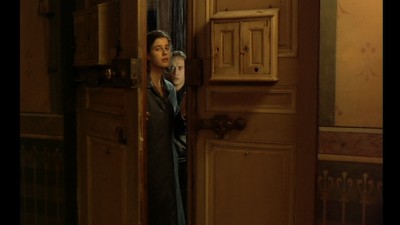 You'd think it would be the foreign/art-house film fanatic's dream come true: "Wim Wenders [legendary director of Paris, Texas and Wings of Desire] presents a film by Michelangelo Antonioni [the even more legendary director of visionary masterpieces from L'Avventura to Red Desert and beyond]." That's the alluring DVD-sleeve verbiage announcing Beyond the Clouds, Antonioni the elder statesman's and Wenders the younger acolyte's 1995 collaboration, a sort of omnibus film that puts to the screen four short-fiction sketches from a book previously published by Antonioni. But the more you know about the circumstances and background of the film (which was to be Antonioni's, who died in 2007, final feature), the more dubious and unpromising it seems: Wenders was apparently recruited emergently to help a severely debilitated Antonioni, who was 83 and had recently suffered a serious stroke, complete the project. It was only fragments of stories to begin with, and then to have two authorial visions at once, not by well-considered choice but by last-minute exigency...this does not bode well, and indeed, the film is less the meeting of two brilliant minds than it is a soggy, misshapen Frankenstein's monster that not only doesn't coalesce, but actually seems at times to exacerbate and then prominently feature both of its authors' more negligible or potentially bland/pretentious tendencies. 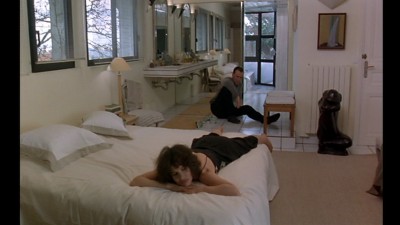 There is an attempt at a framing device meant to both conjoin the film's four episodes and call attention to them as stories, or story fragments. This comes in the form of John Malkovich, who plays an ennui-ridden filmmaker fresh off his last film and now in search of his next story. This director-figure jet-sets between Beyond the Clouds's two co-producing countries (Italy and France) for his "research," and we follow along as his envisioning of the different scraps of story play out to become the bulk of the film we're watching. In the first, a handsome young yuppie from the city (Kim Rossi Stuart) comes to a springtime-fogbound Italian village to unwind, where he falls in love with the beautiful young teacher (Ines Sastre) who directed him to this particular place and is herself residing across the hall; despite falling in love, losing one another, and then serendipitously re-crossing each other's paths years later, their immediate erotic/spiritual connection is missed at the physical level, perhaps because the idea of their love is too perfect to risk actually consummating it, as close as they might come. The second finds our director himself, after landing in a seaside town, and a beautiful young shopgirl (Sophie Marceau, Police) whose past contains a sensationalistic, noir-like story, doing a long dance of bold flirtation that they do physically consummate, in a satisfying one-off that seems to dissipate the cinematic appeal of the girl's story in the mind of the director. An American expat living in Paris (Peter Weller, The Naked Lunch) hurts both his wife (Fanny Ardant, 8 Women) and his mistress (Chiari Caselli, My Own Private Idaho) by prolonging their love triangle for years, the triangle becoming a small-world square when Ardant meets the mistress's husband (Jean Reno, Léon: The Professional). Finally, it's the flesh versus the spirit as a young man (Vincent Perez) follows yet another beautiful young woman, a devout Catholic (Irène Jacob, The Double Life of Véronique) to and from evening Mass through the avenues and alleyways of Aix-en-Provence, his physical desire for her and her exclusive spirituality blooming into extended, somewhat Before Sunrise-like philosophical conversation until his hopes are dashed when he finally discovers just how deep her devotion runs. 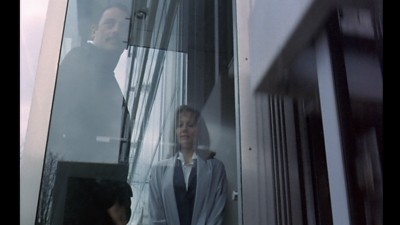 Somewhere in there, there's also a lovely interlude with European screen legends Marcello Mastroianni and Jeanne Moreau (Antonioni's lead glamour-couple in his great 1961 film La Notte, as an elderly amateur landscape painter and his companion, who have a rueful but good-humored exchange, as he paints, on the human need for "copies" -- representations instead of real things, whether in the form of paintings, copies of paintings (such as the one the Mastroianni character apparently creates), films, all kinds of fiction, etc. It stands out as virtually the only moment in Beyond the Clouds where image, sound, performance, and dialogue meet and blend to form something intriguing, suggestive, beautiful, and potentially resonant or meaningful (as Antonioni had been known, in better days, to do for whole films at a time). I wouldn't have minded at all an entire film about these characters and their concerns, or, possibly, one that went further into where the Irène Jacob and Vincent Perez characters were coming from and going, both geographically and philosophically speaking; there are quite wonderful, effective, inspired moments at every level in the Aix-en-Provence segment, as well. 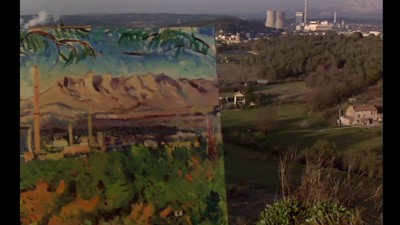 Elsewhere, there are enough images that clearly bear the visionary signature of Antonioni -- characters set precisely and evocatively against their backgrounds, whether human architecture or nature or some exalting/disconcerting natural/man-made hybrid, with the most striking uses of framing and mise-en-scène, the most subtly elaborate choreography of the camera and suspense-building reframings of the image -- to keep you going. But far too much of the time, it's very, very tough going: Malkovich's presence, overlaid as it is with his nonstop voicing-over of Antonioni's meditations about filmmaking and life, is both superfluous and just badly done. The only haphazardly relevant voice-overs, when they meet the visuals of Malkovich wandering around Europe posturing and posing with a model's vacant, "yearning" look, are oil and water, false and belabored and genuinely pretentious, like some stereotyped SNL parody of what a filmmaker like Antonioni does. The highly atypical (in an Antonioni film) use of music -- by U2/Brian Eno and Van Morrison, among others, surely Wenders's idea -- is clichéd, dull, and obvious -- postcard-picture music videos that couldn't have less to do, and actively work against and undermine, what we know of Antonioni's brilliant aesthetic and narrative imagination, or even of Wenders's modus operandi when he's on (Ry Cooder's guitar in Paris, Texas or Nick Cave's cameo in Wings of Desire, it ain't). And the ludicrously florid, dull-witted scenes of "eroticism" are awful, embarrassing, laughable for too many reasons to enumerate, though the cheesy mid-tempo sax/guitar accompaniments (it scarcely matters that they seem to have been provided by Van Morrison; they're utterly generic) and the incongruity of a John Malkovich or a Peter Weller with a Sophie Marceau or a Chiari Caselli (no knock against the unique charms or perfectly passable middle-aged physical fitness of either actor, but these scenes are so superficial that they demand to be judged superficially, and it's a glaring physical mismatch) would be high on that list. 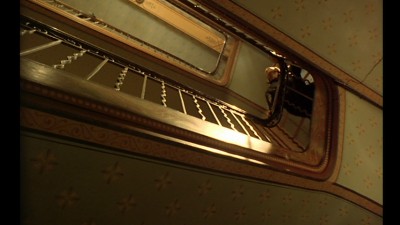 The film isn't entirely devoid of Antonioniesque vision or inspiration; it's there, intermittently but clearly discernible, all the better to make our brows furrow and our mouths turn helplessly downward when the next cut is to something so banal in every way, so obviously beneath what we know from an extremely impressive filmography to be the power of Antonioni's style when it's properly followed through. But the director was a very unwell, very elderly man at the time of Beyond the Clouds's production, and the soppy U2/Van Morrison MTV-isms remind us that Wenders was entering a fairly dark valley (The End of Violence, anyone?) on his own creative journey. Perhaps any film is, in a way, a marker of where its creator(s) were at, artistically and in life; Beyond the Clouds, at least, is clearly such a memento, and one from unfortunately but unignorably fallow/declined periods for Antonioni and Wenders both, each in his own way. There are things of real value to be salvaged from this movie, but that's work best left to completists already enamored with the filmmakers for the trails they've blazed and the high peaks they've scaled. Beyond the Clouds isn't an entirely worthless effort, but it is imperative that it not be anyone's introduction to the usually much better work of Wenders or, especially, that of the late Italian master, who, one can't help feeling, deserved to go out on a much higher note. 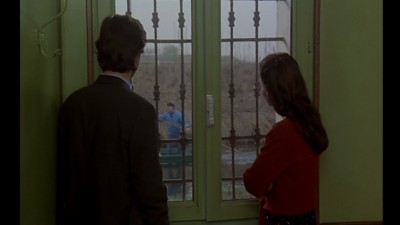 
The transfer preserves the film's original theatrical aspect ratio of 1.66:1, but that's about the nicest thing that can be said for it; there's aliasing and edge enhancement/haloing galore, and lots of surface debris/wear and an overall drained-out look renders the picture quality only marginally superior to that of a VHS edition.


The sound is a higher point than the picture; a Dolby Digital 2.0 Stereo soundtrack (in English, and Italian and French with non-optional English subtitles) is clear, crisp, and immediately present throughout; in fact, the audio is superior enough to the image the clarity, crispness, and fullness of the sound of the rain or John Malkovich's voice becomes an almost disconcerting mismatch in conjunction with the more compromised accompanying visuals. 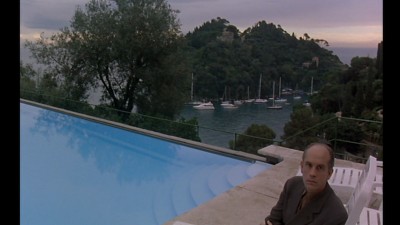 An ailing elder statesman of European art film (Michelangelo Antonioni) is forced by health and production exigencies to collaborate with a younger German admirer working in a similar vein (Wim Wenders). One hopes for the best but has to be prepared for the worst, and I'm sorry to have to report that the last-minute duo's 1995 film Beyond the Clouds proves most optimism anyone might have had to be misplaced. It's four story-sketches by Antonioni, vaguely thematically related (something about unconsummated love and/or artistic ambitions), played out by a cast of European all-stars from Jean Reno and Fanny Ardant to Sophie Marceau and the luminous Irène Jacob, with John Malkovich as the Antonioni figure supposedly tying it all together with his stylishly lost look and ponderous, almost completely irrelevant and detached voice-overs. It's a sprawling, patchwork mess; for every situation/environment/interaction that almost feels like classic Antonioni, there's something embarrassingly trite and bizarrely (for Antonioni) conventional to cancel it out, as if someone kept switching the channel to late-night softcore or exotic lingerie ads, with Wenders indulging his own MTV-like mid-career popular music fandom here and there at the further expense of the film. If you've yet to see all of the premium, essential Antonioni -- L'Avventura, Red Desert, even Identification of a Woman -- it would be very ill-advised (not to mention unforgivable) to go for Beyond the Clouds first; if you've already exhausted the extensive cream of the Antonioni filmography and are looking for a completist's fix, it'll do in a pinch. Either way, nobody ever needs to do anything more than Rent It.