Devil and Miss Jones, The 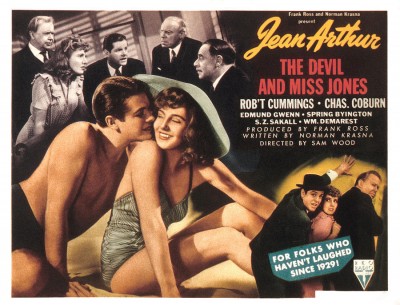 Critics are fond of declaring things like, "It's the best time I had at the movies all year!" Only, when we do, it's not supposed to be about a movie that is over 70 years old.

Except some times it's true. I've had a rough time with movies in 2013. I've felt like I've disliked more than I've liked, and what I have liked, it's usually come with reservations. Let's hope that 1941's marvelous The Devil and Miss Jones is the true break to that negative streak. An efficient, unadorned comedy, The Devil and Miss Jones is a delight from start to finish, inviting viewers to invest in its characters and cheer for their every success. By the climax, I was howling with laughter and reassessing my cynical opinions about my fellow man.

The "Devil" in question is J.P. Merrick (Charles Coburn), the richest man in the world. The reclusive tycoon is shocked to find himself in a photo on the front page of the newspaper being burned in effigy outside a New York department store he owns. Some of the employees there have been trying to unionize, and Merrick is not happy about the changing tide of worker's rights. He decides to go undercover and get a job working in the children's shoe department so he can witness first hand what all the fuss is about and root out the agitators.

It's there that he meets Mary Jones (Jean Arthur), a sweetheart of a salesgirl who shows the old man the ropes and even loans him half a buck when she thinks he hasn't any money for lunch. Mary is a kind woman who has been around the block a couple of times but hasn't let it tire her out. She invites Merrick into her world, helping to fix him up with one of the older employees at the store (Spring Byington) and also taking him to workers' meetings. Her boyfriend Joe (Robert Cummings) is the organizer of the would-be union, and Mary has inadvertently put him in the boss' cross-hairs. Not even a conspiracy-minded politico like Joe suspects that the enemy is walking in their midst.

Unsurprisingly, Merrick ends up taking a real liking to his new friends and their simple way of living. The Devil and Miss Jones joins the ranks of other socially conscious comedies from the 1930s and 1940s that found humor and honesty in the plight of the working man by putting the privileged few down amongst the masses. It's equal in measure to 1936's My Man Godfrey and Sullivan's Travels, also released in 1941. In some ways, sure, it maybe simplifies the issues, particularly in how the villainous money man so easily goes from gruff grizzly to lovable teddy bear, but at the same time, The Devil and Miss Jones can be disarmingly frank, both in how it deals with work relations and also romantic entanglements. In the eyes of writer Norman Krasna (White Christmas) and director Sam Wood (Pride of the Yankees), both aspects of modern living are connected. Everything we do is about how we survive in a world where it's easy to get lost in the hustle and bustle, it all comes down to how we treat one another. It's not like it is in the movies or popular songs, Mary tells us, sometimes you just have to love the one you're with. 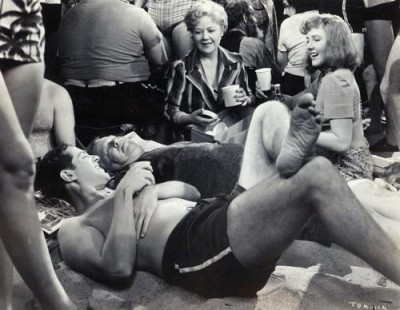 This practical approach to life is nowhere more evident than in the sequence where Mary organizes a trip to the beach at Coney Island. There, the quartet are just a four-spot amongst hundreds of others. Merrick, who is unfamiliar with such outings, gets separated from the crew and finds himself without his clothes or identification, seeking a way to make contact. That his friends not only find him but rescue him from incarceration at the risk of their own freedom shows him what it's like for the common man living his day-to-day without the safety nets of money and power. Family and companionship are all they really have.

Charles Coburn was nominated for an Academy Award for his portrayal of the gruff businessman. His is an expert performance, never overplayed, not even when the scene calls for him to lose his temper. Sentimentality is kept to a minimum, even when he is going through his transformation. The script smartly communicates the bulk of his metamorphosis through action rather than speech. Merrick's evolution is mostly reaction.

Even so, the Devil is no match for Miss Jones. How have I not been on the Jean Arthur train before now? The actress' performance here is a revelation. She carries the picture, providing both its heart and its funnybone. There are a couple of fantastic slapstick moments in the climax, including an hysterical interior debate perfectly executed through exterior performance and gesture when Mary has to decide whether or not to strike Merrick across the back of the head with a shoe. Determination crumbles into fear and concern and then self-recrimination, all played out silently behind the elder gentleman's back. The comedy works because we already know what kind of a person Mary is, we know it's not really in her to crack her friend's skull. Jean Arthur has sold us on the bigger emotions, delivering a pair of monologues about romance and individual determination that, had they come via a less capable personality, would have just seemed schmaltzy.

That's the true indicator of how well The Devil and Miss Jones holds together. Even when it goes broad with either the comedy or the politics, the film utilizes intelligence and honesty in equal measure to what it otherwise shows in the quieter moments. The audience can get on board with the sweeping changes because Sam Wood and company have already built to them by lining up a series of tiny changes, laying a foundation so The Devil and Miss Jones can deliver on its promise of big entertainment without sacrificing any of its heart. And, boy, does it ever work! This is the kind of movie that you want to start over just as soon as it ends in the hope that you can forever sustain the feeling it's inspired. If the party is still rockin', then what's the point in stoppin'? 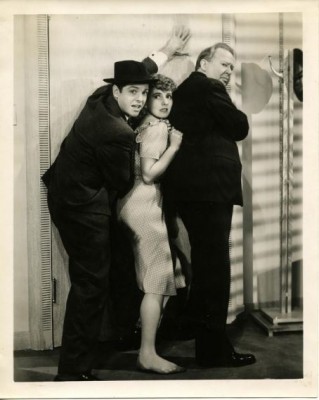 Video:
A very nice restoration job has been done on The Devil and Miss Jones. The film is shown here in black-and-white at its original 1.37:1 aspect ratio, mastered for high definition. The picture is stable throughout, with clear resolution and a fine surface grain that preserves the intended cinematic quality. Print damage is present at times, but briefly and rarely. The are also occasionally shots where the edges of the frame go a bit blurry, something that isn't uncommon in current presentations of older films. These momentary lapses are all acceptable imperfections; all in all, everyone involved has done an excellent service in preserving this classic motion picture.

Sound:
The mono mix on the original soundtrack is solid, with no hiss, drop-outs, or glitches. Perhaps the best compliment I can give it is that it calls no attention to itself. The dialogue and music all sound great, to the point that you don't really notice, you're just too busy listening. And that's just fine. You attention stays right where it belongs.

FINAL THOUGHTS:
Highly Recommended. The Devil and Miss Jones is one of those movies that I can't believe I have gone so long without seeing. This 1941 comedy is an absolute charmer. An easy description would be to say it's the best episode of Undercover Boss you'll ever see, but that comparison seems too cheap for a movie of such fine quality. Jean Arthur stars as Miss Jones, a salesgirl with a kind heart and an activist's streak, who inadvertently becomes involved with the richest man in the world (an excellent Charles Coburn) when he starts working in his own department store to find out why the workforce is turning against him. The Devil and Miss Jones is a witty comedy, a smart romance, and a touching parable of the human condition. It's as fresh and relevant in the early 21st Century as it was in the mid-20th. Seek it out!