A lot of folks (this guy included) are looking forward to the upcoming episodes of Arrested Development when they appear online, because at times the in-between period of movie appearances for television stars have traditionally been slightly painful. Jason Bateman has treaded those waters adequately, and the most recent film of his pairs him with one of the more popular female comic actresses of the moment in Identity Thief.

Written by Craig Mazin (The Hangover Part II) and directed by Seth Gordon (Horrible Bosses), Bateman plays Sandy Patterson, a loyal husband, father and employee for a business in Denver. He receives a call about a potential fraud alert, but as it turns out it is from an imposter. Cut to Diana (Melissa McCarthy, Mike & Molly), the acquirer of Sandy's credit information and runs wild with it on bar tabs, clothes, makeovers and the like. Sandy locates where all the fraud is occurring after an arrest by the police and travels to Florida to locate Diana (who does not relent without a fight) in an attempt to bring her back to Denver and reconcile the charges and his financials. Over the course of the journey, we learn that Diana's crimes reach past just stealing Sandy's info, a bounty hunter named Skiptracer (Robert Patrick, Safe House) and two assassins (Genesis Rodriguez and musician T.I.) are hot on her heels to either capture her on a jumped bond or just to kill her altogether. 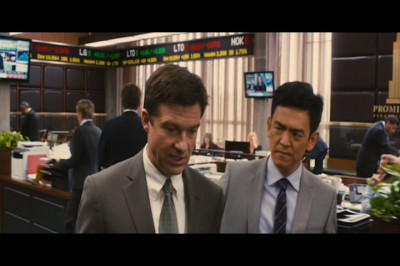 The attempt from the filmmakers is to incorporate elements from the classic road movie comedy Midnight Run (even borrowing a musical cue from it and making it their own) and modernize it with elements like finding an identity thief. And watching Bateman play straight man to a host of comics both in television and movies, I pretty much know what I am going to get with him. This leaves us McCarthy, who I do like when she decides to try a different facet of her work. However, more and more she is to me catering to a demographic that likes when she does physical comedy. It is like someone said that she should start channeling Chris Farley but with bigger boobs, when the fact of the matter is that the nicer moments in the film are when we see her tread through her backstory as Diana. She even sheds a tear or two during the journey that makes the character kind of sort of likable. This makes it more frustrating to see her do the â€˜fatty fall down' bits that people apparently want to see and that I do not find funny. Oh, and the part in the trailer where she punches Bateman in the throat when she gets caught? Start a drinking game for these before you watch the movie, as this bit is repeated so many times one can take down the reactions of everyone as this behavior gets less and less funny.

It does not help that the film is entirely too long. The cast does do some improvisational work in scenes, but it feels like those scenes added into the movie while trying to focus on the story. This makes the overall result drag out to Peter Jackson-levels, where everyone is trying to say goodbye and wrap things up for the last 20 minutes of the 111-minute runtime. This does not say anything for the personally implausible actions by the lead actors in the final act, considering how firmly entrenched they were with their beliefs in the first two acts. That the moments of actual humor are few and far between in the film does nothing to provide some measure of forgiveness. 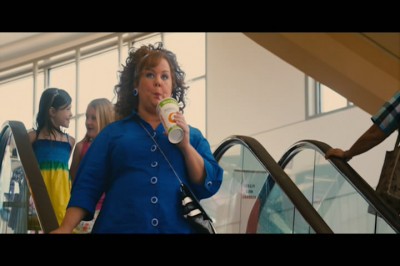 With the hope of making a new classic inspired from an existing one, Identity Thief feels more like Midnight Express than Midnight Run. McCarthy continues to prove that she cannot carry a movie despite some moments of emotion, and Bateman's post-television career may have sunlight, it is a mostly cloudy environment. Using a formula that is generally foolproof and shoehorning it into a comedy film, the storytellers simply have stomachs bigger than their hearts allow, and the result is a two-hour unfunny film.


Universal uses the AVC codec to present Identity Thief in 2.35:1 widescreen, with the results being solid. Film grain is present during viewing and image detail is decent despite some periodic bouts of softness. Flesh tones and the film's color palette is reproduced accurately for the most part, and black levels are good though some occasional crushing is evident. The film does make ample use of the exteriors, and they look fine against the dull brown of Skiptracer's van, for instance. It is decent viewing material.


The DTS-HD Master Audio 5.1 surround track is decent enough for this comedy. The dialogue is firmly balanced in the front of the theatre and the film includes moments of directional effects (a PA announcement coming out of the rear channel was intriguing) and channel panning. Even a scene where a truck plows through a rental car (that was airs ad nauseum in the film's trailer) possesses some low end engagement, and there are other moments that the subwoofer gets some work too. Generally about what I expected for this.


The film's making of look (17:04) contains many of the usual notes in an electronic press kit, such as how the story reached the cast and crew, the cast's thoughts on the characters they play and the actors they share the screen with. "Scene Stealing" (7:35) features the cast recounting their favorite moments and the challenges and joys of shooting improvised sequences, along with how to film them. "Alternate Takes" (5:07) is just that, with some chuckle moments dusted among the flotsam and jetsam. "The Skiptracer's Van Tour" (3:33) is an in-character piece hosted by Patrick that is decent. The gag reel for this semi-improvised comedy lasts 48 seconds, to which my one-word reply is "Seriously?" Nobody could have shaved a couple of minutes off the Making Of to include it here? If that does not sum up the decisions of the production, I don't know what does. The disc includes the theatrical cut and an extended one which runs eight and a half minutes longer, just cracking the two-hour mark. This combo pack includes a second disc with a standard definition copy of the film (the source for the review's images) and iTunes/Ultraviolet copies to finish things off.


At this point, I'll presume that many other people have taken many of the best jokes surrounding other things that Identity Thief has stolen. But you know what else it steals? Hope that the jokes will ever show up consistently (I had room on both hands to count the lines or scenes I laughed at), and patience with McCarthy's acts of physical comedy. Technically the disc is fine though from a bonus perspective stinks. As a comedy it disappoints, as a road movie it is arduous, and if one wanted to buy this, they would really have to be a glutton for punishment.