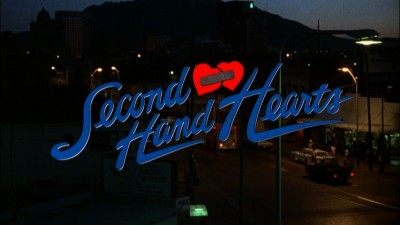 Hal Ashby was part of the great wave of American directors who redefined cinema in the 1970s. Like most of his contemporaries, his output was as erratic as his personal life, and both were a reflection of the times. Whenever you watch a Hal Ashby film--be it The Last Detail or Harold and Maude or Being There--you never get the sense that he ever did anything less than pursue the pictures he saw with everything he had. This could make for odd indulgences and a contemporaneous irreverence rivaled maybe only by Robert Altman.

This means that when Ashby flopped, as he did with his 1981 road-trip romance Second-Hand Hearts, boy, did he really flop. Written by Charles Eastman (The Shooting) and shot by the great Haskell Wexler (Medium Cool), Second-Hand Hearts displays an impressive dedication to style and tone, but otherwise, it seems everyone was maybe freeballing it a little too much for the movie's own good.

Robert Blake (In Cold Blood) leads the cast as Loyal, an alcoholic car-wash attendant who, on his last bender, married a saloon singer named Dinette (Barbara Harris, Family Plot). Loyal's new wife is a widow with three kids that are currently in another Texas town staying with her in-laws. Even though Loyal loses his job, Dinette won't let him out of the marriage. Instead, she compels him to take her to get her youngsters, and then to drive them all from Texas to California. We never see them arrive at their destination; instead, Second-Hand Hearts spends its running time looking at the oddballs they meet on the way. 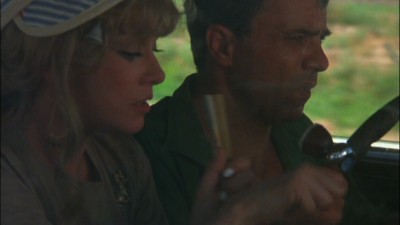 In Ashby's universe, the American Southwest is a zoo full of human eccentrics: gangs of Mexican highwaymen, one-handed rattlesnake hunters, and in one of the movie's queasiest stopovers, a child molester. It says something about Second-Hand Hearts's addled quirkiness that it features a scene where a pervert has his way with Dinette's son, and that the kid is not only a mute ("don't tell anyone" seems even more sinister when the child basically can't), but his name is also Human. Is he meant to stand in for all of us? Is the highway Loyal has taken them on really the road to Hell, everyone they meet is a metaphor, and Second-Hand Hearts is actually a tripped-out allegory?

I'd firmly vote "no" on that one. There's nothing else in the film to suggest that Ashby is pursuing any greater meaning. He is simply trying to do what he does best: show two misfits finding love. This time around, he blows it by overdosing on weird. How do you make two specific misfits stand out in a landscape where everyone is a misfit? Push them harder and further over the top, whether it makes sense or not.

Barbara Harris is fairly good as Dinette. She is kooky and chatty, but the actress seems to get that there is more to her character than that. She is also a mother with a determination to see her family have a better life. Harris gives Dinette soul, and though the writing regularly fails her, the effort is there. On the other hand, no amount of good writing could have helped Robert Blake. He plays up Loyal's nervous habits to such a degree, he comes off like all Three Stooges rolled into one ball of anxiety. I think the intention was to make him a nervous loser in over his head, but Blake ends up looking like an oafish mental patient.

The clumsy performance undercuts any impact Loyal's making good might have otherwise had. Then again, most viewers won't be invested in what is going on in Second-Hand Hearts by the time Ashby gets to the tender stuff anyway. 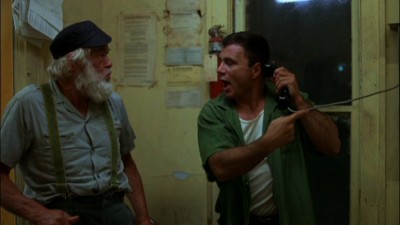 Video:
Warner Archive's recent manufacture-on-demand release of Second-Hand Hearts offers a nice widescreen image, with well-rendered colors and mostly clean resolution, with only a minor jaggedness, that preserves the movie's intended look. If anything, you can always enjoy looking at a Haskell Wexler photographed landscape.

Sound:
The mono mix is decent, with some metallic tones that make the overbearing country music soundtrack even more off-putting. Even so, the dialogue is clear and there are no dropouts or obvious extraneous noise.

FINAL THOUGHTS:
Skip It. Even great directors have turkeys every once in a while. Second-Hand Hearts is Hal Ashby off his game. It works neither as a love story nor as a road trip. Too much forced weirdness, not enough genuine emotion. Better Hal Ashby movies achieve both naturally. (Though, if you want to see where his latter off-the-rails period worked for him, go with his next flick, Lookin' to Get Out.) Second-Hand Hearts is a woeful misfire. 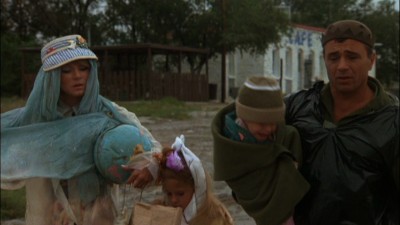