Love Is a Many-Splendored Thing 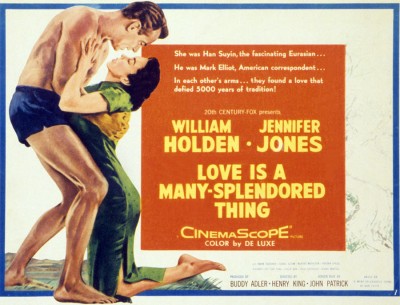 Is it possible I've always misunderstood the meaning of the word "splendor"?

There are indeed many aspects to the love affair between William Holden (Sabrina) and Jennifer Jones (Song of Bernadette) in Henry King's 1955 adaptation of Love is a Many-Splendored Thing, but splendor isn't really one thing I'd count among them. At least not in the story or performances.

Holden plays Mark Elliott, an American reporter working in Hong Kong at the end of the 1940s. It's at a wealthy foreigner's party that he meets Han Suyin (Jones), a half-Chinese, half-European doctor who works at the nearby hospital. She is a widow who works too hard, he is a dedicated wordsmith in an unhappy marriage. Mark instantly falls for her, but it takes him a good portion of the movie to draw Suyin out of her shell. Being a widow has given her a good pretext to retreat from affairs of the heart; being of mixed race provides any other excuse she may need.

Love is a Many-Splendored Thing's love story plays out against an interesting backdrop. Though the British control Hong Kong, the Communists are transforming China, and by the end of the movie, they will also have moved into South Korea, kicking off conflict there. The screenplay by John Patrick (The Strange Love of Martha Ivers), working from the real Han Suyin's autobiographical novel, attempts to engage with all of these changes, as well as the various reactions to Suyin's affair with a Westerner, through many different eyes, playing off of Suyin's mixed heritage. It's not entirely successful, possibly mostly because nowadays it's weird to hear an actress consistently refer to herself as Eurasian while being keenly aware that she is a white American through and through. It also doesn't help that all of the other Chinese are portrayed as something "other," prone to superstitions and customs that the filmmakers fully meant for us to find strange and outdated.

These mishaps are pretty easy to ignore, however, and I give the filmmakers credit for likely attempting to deal with subjects that were not commonly addressed in mainstream entertainment at the time. What can't be ignored is just how little chemistry there is between Holden and Jones. For a famous romantic movie, it's pretty clear--and anecdotes from the production back this up--that the two lovers didn't get on at all. I don't know if 1950s audiences were fooled into thinking that Jones' stilted line readings were somehow overly formal because of her character's Chinese upbringing or what, but it's hard to believe a word that comes out of her mouth. Holden might as well have been flirting with a brick wall.

Thus, though it would be easy to bang on King's starched directorial style, he deserves some kind of applause from managing any sexiness in this thing at all: the oft-cited scene on the beach where Mark gives Suyin a cigarette and uses his own to light it actually heats up the screen. I guess the only way to get Jennifer Jones to smolder was to have something literally smoldering in frame with her.

For his part, Holden makes a good go of it. He's always an extremely watchable leading man. Love is a Many-Splendored Thing is also beautiful to look at. Cinematographer Leon Shamroy (Planet of the Apes) and his in-the-field assistant Charles G. Clarke make the most of the Hong Kong locations and the ultra-wide Cinemascope screen ratio to add lots of wonderful sunlight and color to the drab courtship. It's from these two that any splendor in King's film arises.

And, of course, no one can forget Alfred Newman's theme song, bathing Love is a Many-Splendored Thing in the emotion that its leads can never generate.

It's for these reasons that the film isn't a total wash. Though it tends to be dull, Love is a Many-Splendored Thing is not howlingly terrible. It's worth a look just to see the effort of its crew, and to enjoy an evening with William Holden. Just don't go into it expecting to fall in love. 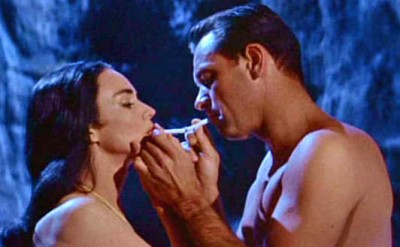 Video:
Twilight Time is releasing Love is a Many-Splendored Thing as a limited edition run of 3,000 copies, and boy, does it look marvelous. The aforementioned cinematography looks stupendous in high definition. Colors are bright and expressive, and the image is clean. There appears to be no DNR; on the contrary, the grain is pleasing and perfectly simulates the silver screen experience.

Sound:
Love is a Many-Splendored Thing is given an audio makeover in 5.1 DTS-HD Master Audio, and it has a lot of pep. Dialogue sounds sharp and is nicely balanced with the music. My copy had one drop out, a quick glitch when Humphrey Palmer-Jones (Torin Thatcher) first comes to see Suyin in the hospital, but that was an isolated anomaly.

Extras:
Twilight Time includes a nice booklet with their release, featuring liner notes that mesh well with the on-disc audio commentary, a three-part discussion with different film experts that is a carryover from the previous DVD edition. There is also some newsreel footage that was on the original disc, and the movie's theatrical trailer.

FINAL THOUGHTS:
Oh, what can I say. Much like a comedy either makes you laugh or it doesn't, a romance either makes you feel the rush of passion that overtakes its characters or it leaves you unmoved and unconvinced. Love is a Many-Splendored Thing is beautiful to look at, it has a justifiably beloved score, and hey, who doesn't want to pal around with William Holden? The problem here is he's paired with Jennifer Jones, who was not one of the studio system's better contract players when she was playing an American, much less when she's pretending to be half-Chinese. Though the film does touch on some interesting politics, it's still stuck way back in the past, and time is doing it no favors. Still, Rent It for it's good qualities and give yourself the opportunity to pick apart the bad ones yourself.