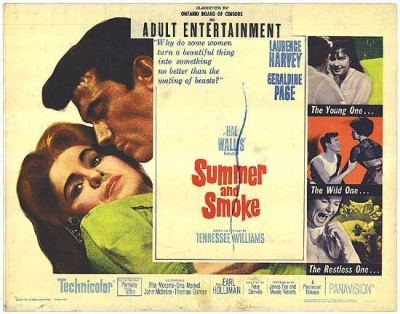 When an artist or writer or filmmaker has a certain well-known amount of work to his or her name, it's easy to forget or, truthfully, never even realize that they could have just as much material the casual observer has never even heard of. Everyone knows, for instance, that Tennessee Williams wrote A Streetcar Named Desire and Cat on a Hot Tin Roof, but these are his successes, there must have been minor works in between. Therefore, when a surprise title like Summer and Smoke pops up on the new release docket, forgetting that maybe there's a reason it's not a commonly known play is understandably overtaken by the thrill of discovery.

So, consider this your reminder to temper your enthusiasm and avoid the mistake of thinking that Summer and Smoke is anything other than a lesser entry in Williams' bibliography. Or, at the very least, the reason more isn't said of the 1961 film adaptation of the 1948 play is that the Peter Glenville (Becket) motion picture doesn't really elevate the source material.

Geraldine Page heads up the cast as Alma, the daughter of a Southern preacher. Alma grew up with a crush on the boy next door. John (Laurence Harvey, The Manchurian Candidate) is the son of the local doctor, expected to follow in daddy's footsteps, but more inclined to the healing powers of drink and distractions than of genuine medicine. John is returning home following graduation, but his reputation for partying got back to the small town where he was born in advance of his arrival. Seeing no reason to play it safe, he hooks up with Rosa (Rita Moreno, West Side Story), a Latina whose father runs the nearby casino. She's just the right kind of trouble for John.

Only, John also seems aware of Alma's interests, and he returns them in a teasing kind of way, the same as when they were children. There has always been a romantic tension between the bad boy and the good girl. Williams doesn't even attempt to hide his intended metaphor: John is representative of the body and science, Alma is the soul and religion. Can the pair find a middle where they can meet, where anatomy combines with spirit to be more than the sum of their sexual parts?

That is the burning question of Summer and Smoke. The only problem is, the answer barely smolders. There is hardly any chemistry between the romantic leads, largely because Harvey is not a very charismatic antihero. He paints a portrait of the rebel as a stuffed shirt. Which, to be fair, means the actor is operating at pretty much the same speed as the rest of the production. Most of Summer and Smoke fails to get up to temperature. Only Page gives any distinguishing work. The movie is almost worth watching for her final confession to Harvey. She wrings the monologue for every heartache and pang Williams built into it. It's an emotionally heavy sequence, the story's true climax, written with disarming tenderness, even if the technique and subtext comes across as having been built from leftover scraps intended for Blanche Dubois.

Then again, most of Summer and Smoke seems to be cobbled together with bits and pieces of other, better Tennessee Williams scripts. The movie often seems less like one of the author's legitimate efforts and more of an attempt by a less-talented writer to co-opt his style. The sexuality is tame, and the undercurrent of madness, seen mostly through Alma's mother (Una Merkel), comes off as cartoony--a bit of fakery only made more apparent by the obvious backlot sets. The exteriors in particular look almost surreal in their artifice. Maybe this was by intention? The art direction, along with Geraldine Page and Una Merkel in their respective acting categories and well Elmer Bernstein for his music, were nominated for Oscars.

Summer and Smoke is Tennessee Williams by the numbers, and while that still makes for fairly decent viewing, the memory of what you saw is likely to dissipate as quickly as the smoke referenced in the title. 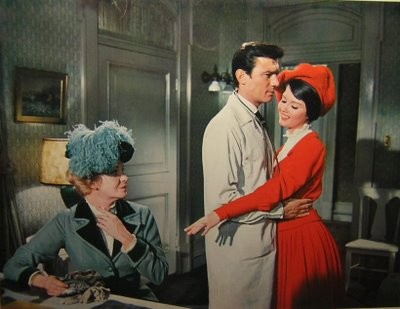 Video:
The Olive Films transfer for Summer and Smoke, mastered in high-definition and shown at the intended 2.35:1 widescreen aspect ratio, boasts nice, vivid colors and an overall clean picture. The grain is mostly consistent and properly modulated, though there are hazy spots at times. A strong presentation overall.

Sound:
The original soundtrack has been mixed in mono and is free of any distortion or glitches.

Extras:
None. Though I do really like the line work on that cover drawing.

FINAL THOUGHTS:
Rent It. Tennessee Williams' Summer and Smoke (sometimes called The Eccentricities of a Nightingale in revised revivals) was the master dramatist's follow-up to A Streetcar Named Desire, and at times, particularly in this 1961 film adaption, Summer and Smoke comes across as merely warmed-up leftovers from that more successful effort. Despite a fantastic performance by Geraldine Page, Peter Glenville's motion picture never really finds its footing. It feels like a hodge podge of Williams as opposed to a solid narrative unto itself.