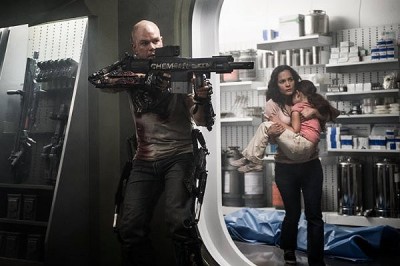 As our own present grows increasingly tenuous, it's up to movies and other entertainment to try to show us a future with a promise of hope. The latest in a surprising string of "our planet is doomed" science-fiction films, Elysium, is the only one in recent memory that leaves the Earth standing and unable to shrug off the majority of the humans that live here, advancing the narrative a number of years and imagining how population growth and environmental decay will affect the world of tomorrow.

Elysium is the name of a big satellite wheel in the sky, an artificial habitat where the wealthy have decamped to live out extended lives as far away from their home planet as their sense of smell requires (povs stink, y'all!). Clean air, advanced conveniences, and a health care system that can cure injury and disease by altering damaged molecules is de rigueur up there; whereas down below, the poor and the afflicted labor for a society that has abandoned them. All they can see of Elysium is its outline in the sky and the shuttles that fly their rich bosses back and forth between paradise and hell.

Our hero in the movie, which was written and directed by District 9's Neill Blomkamp, is Max, a boy who grew up an orphan in the Los Angeles slums. As an adult, Max is played by Matt Damon, and he's a one-time car thief on parole trying to make a wage on the straight and narrow, building the same robot enforcers that keep regular citizens like him in line. Max has always dreamed of going to Elysium, and a series of bad circumstances have now made it imperative that he get there in the next five days. To do so, he agrees to do a dangerous job for Spider (Wagner Moura, The Elite Squad), a cosmic coyote who smuggles illegals into orbit. The data heist is dangerous all on its own, but things get messy when the target ends up carrying incriminating info intended for Elysium's hawkish Minister of Defense (Jodie Foster, presumably appearing courtesy of whatever country her bizarre accent derives from). She sics a particularly nasty field agent (District 9's Sharlto Copley) on Max, causing things to get excessively violent real quick. Max's childhood sweetheart, Frey (Alice Braga, Predators), and her terminally ill daughter also end up being hijacked into the scheme. 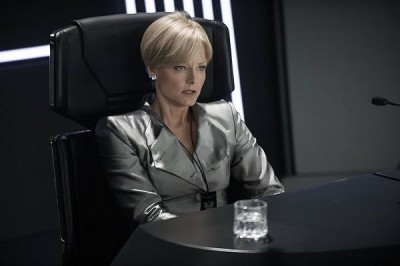 As with District 9, Blomkamp weaves political commentary into the fabric of his script. In this case, universal healthcare and the widening gulf between rich and poor. There are some interesting ideas getting batted around here, most of which are approached on only the most basic level and never openly discussed. This is good and bad: it's hard to tell if Blomkamp is heavy handed or actually empty headed. Like in his debut, he abandons the greater allegory in favor of blood and gore. He has a real sadistic streak, one brought to life with a nasty relish by Copley's homicidal soldier, and seems incapable of anything more subtle than an exploding body.

Which, I don't actually mind. I can live with my fair share of gore. Many of the action sequences are exciting, with special effects giving way to some pretty brutal hand-to-hand between Damon and Copley. Of course, Blomkamp being Blomkamp, he undermines even this, ruining some of the adrenalized thrills by using shaky camera effects and stylized filters, obscuring his own hard work under blurs and stutters. He also allows first-time composer Ryan Amon to drop overbearing music all over this thing, meaning there isn't an emotion, big or small, that isn't loudly communicated. It's lazy filmmaking to go with lazy writing. My biggest gripe with Elysium is how often Blomkamp the writer takes a shortcut to allow Blomkamp the director to skip past the tricky bits. The plot consistently turns on convenience, with either characters being too quick to realize something that should have been far more difficult to figure out or taking actions that really shouldn't work, but somehow magically do. 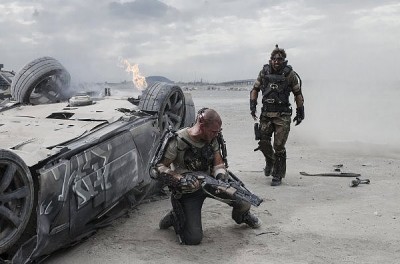 It can be maddening, because forgiving the ham all over Blomkamp's fists, there's lots to like about Elysium. The special effects have an old school, 2001 feel, and never suffer the telltale quirks of CGI. Alternately, the dirty, garbage dump art direction on Earth is realistic and effective. Matt Damon continues to prove he can play a solid action hero with a conscience, and the plot offers enough twists that Elysium never really grows boring, even if it also doesn't fully engage. Blomkamp's harder/faster/more philosophy means that once his foot is on the gas, Elysium keeps accelerating, speeding past its own grand ideas, dragging the audience kicking and giggling in the rumble seat.

This may just be the Blomkamp conundrum. Like Paul Verhoeven, whose movies his work closely resembles, if Blomkamp continues to never fully embrace the messages he alludes to having pretensions to, he will always end up making middling trash that is entertaining but hollow. At least his sophomore effort manages to maintain a singular idea, as opposed to District 9's fractured technique, but it still only ends up being a movie you enjoy with a vague aftertaste of disappointment. 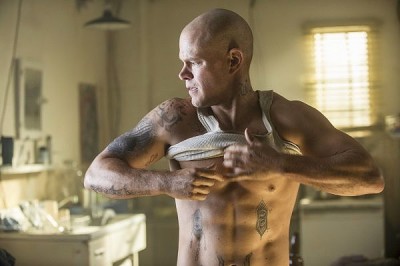