When Boardwalk Empire's second season came to a close, for whatever reason I found myself straying away from the third season. I am not entirely sure what happened, and I never caught up to it on the various streaming/On-Demand outlets. Perhaps it was the quality of said season that had dissuaded me, I do not remember. And now after seeing this third season, I think I will need to ensure not missing future episodes if things are going to be like this.

The opening moments of the second season introduce us to Gyp Rosetti (Bobby Cannavale, Win Win), whose car and the cars of his crew have broken down. Rosetti is a man who finds confrontation where none would normally lay, and this is made clear in said moments. This violent streak serves to set Gyp up as a feared antagonist to the show's main character, Atlantic City liquor bootlegger Nucky Thompson (Steve Buscemi, Youth In Revolt). Things look good for Nucky. Despite a slightly contentious relationship with his wife Margaret (Kelly Macdonald, Brave) and a strained one (putting it mildly) with his brother Eli (Shea Whigham, Take Shelter) after the latter was part of a power play against him, Nucky's business is doing well. Nucky appears to be somewhat haunted by the actions he took in the second season, but as Gyp comes to New Jersey and starts to pose a problem to Nucky's business and life, Nucky is forced to respond somehow. 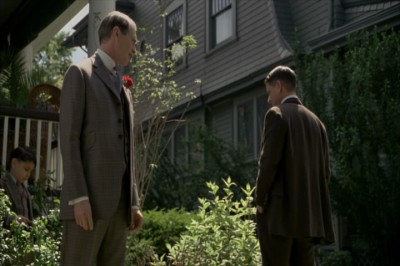 One of the endearing parts of Boardwalk Empire is that all of its storylines are given due attention, whether it is in Atlantic City or in New York City, or even in Chicago, where a young Al Capone (Stephen Graham, Tinker Tailor Soldier Spy) has aspirations to seize control of the business in the city while sparring with rivals in town. And the crazy federal agent played by Michael Shannon (Man of Steel) in the first two seasons? He is still here, relocated to Chicago and under an assumed name, selling irons door to door with the hope of maintaining some sense of normalcy before being pulled into the illegitimate circle of crime.

Rather than spell out all of the various character arcs and settings, it should be noted that all of said characters continue to evolve in various ways, whether encouraging, heartbreaking or what have you. Gretchen Mol plays Gillian Darmody, who recently learned of the murder of her son. She appears to both not only accept the fact that he is dead, but does so in ways that could be considered...let's just call them eccentric. She also is trying to maintain the operations of her brother despite continued financial disappointment, and tries to raise her grandson, even while the brothel's security (and her son's associate) Richard Harrow threatens to even harm this relationship, albeit innocuously.

Where in past seasons characters such as Shannon's or Macdonald's go through some understated full-season developments and slight changes in belief structure, this continues in other characters here too. Nucky makes some bold decisions here and I believe thinks at one point that he may even be enjoying the fruits of his labor. Yet when Gyp presents the threat to his business and Nucky is still standing, one cannot help but think of when Michael K. Williams (who ironically plays Chalky, one of Nucky's business associates in the show) in The Wire when he says "You come at the King, you best not miss." Buscemi is almost a badass in some of these scenes that it is fascinating to see the transformation. 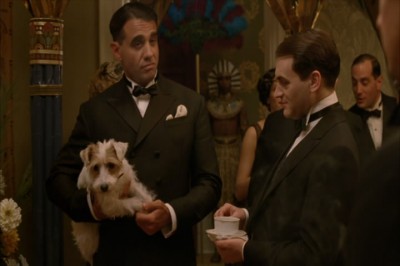 These are not the only things that occur. Watching Nucky and Eli slowly attempt the reconciliation of their relationship is something that builds through the season, culminating to some degree in "Sunday Best," one of several excellent episodes through the season. The shared families help force both men to put aside their feelings and do things that serve to better the family in cheap but effective ways, and seeing this play out was almost as fun to watch as the more exciting or action-packed sequences were.

Virtually everyone in the ensemble in Boardwalk Empire hands in excellent performances this season. Matching Buscemi stride for stride is Cannavale, who takes up the screen and quickly dissolves any thought of his previous comic work with Gyp, a menacing figure who has an underlying rage and self-torture, ready to snap at any offense, real or otherwise. Macdonald, Mol and Shannon continue their respective excellent work, while Jack Huston (who plays Harrow) provides some understated moments of emotion in many of his scenes.

That the acting and storylines are so consistently good that I have not even mentioned storylines which involve recognizable names such as gangsters Lucky Lucciano, Meyer Lansky, Bugsy Siegel and Arnold "Ace" Rothstein, or that others include the Attorney General of the United States, or include what will hopefully be a recurring role for James Cromwell, is a testament to the quality of Season Three of Boardwalk Empire and to the show as a whole. That there is so much more ground the show is able to cover (and spends time doing so) while preserving the integrity of the storylines and supported by excellent performances may bring it back into the discussion of best television dramas out there. I eagerly look forward to what future seasons may be, especially with how fantastic this one was.


The third season's twelve-episode run is spread over five Blu-ray discs and are appear in 1.78:1 widescreen, using the AVC codec as part of its high-definition goodness. The results of the discs are impressive, with black levels being dark and consistent, flesh tones appearing natural and the color palette being replicated accurately. Image detail is discernible whether it is facial pores in closer shots or strands off a robe, or in background shots where grass blades are easy to spot. Not having watched the third season, it may be safe to say the Blu-rays improve on the airings of the shows from a visual aspect alone.


DTS-HD Master Audio 5.1 lossless surround tracks for all episodes, and the results being outstanding. Dialogue sounds fine through the season, but it is the various actions in the season and how the audio handles them which are worth note. A botched assassination attempt finds someone throwing a can down the road and having it not only pan through the theater from left to right but the clink of it landing clean as can be. Another scene with Owen and Margaret seeking shelter from a rainstorm finds the rain throughout all the speakers and wholly immersive throughout. Gunfire rings out through the channels and when an explosion shatters a nightclub, the subwoofer will piss off the neighbors. The listening of the episodes was superb, among the best I have heard recently, much less on a television show.


The supplemental material of Boardwalk Empire is fairly in line compared to prior seasons, which is a good thing because these things are loaded. First up, the big interactive feature on every episode is "Boardwalk Chronicles," a pop-up track which includes historical information on the locations the show hits on and character biographies for virtually every spoken character, and said biographies update as you go deeper and deeper into the year. And occasionally, video backgrounds on a supporting character or situation can be accessed when prompted to press the red button on your remote. The video feature is included as a standalone feature on Disc Five as well (1:02:05). The Chronicles track is informative without being obtrusive and can be easily hidden if so.

Another big feature are the audio commentaries on six of the twelve episodes. On Disc One, there is one for "Resolution" with Winter, director Timothy Van Patten, Buscemi and Huston; Disc Two includes a track on "You'd Be Surprised" with Cannavale, Michael Stuhlbarg (who plays Rothstein), Stephen DeRosa (who plays Eddie Cantor) and writer Howard Korder. Disc Three has two tracks; one on "Sunday Best" with Korder, director Allen Coulter, Whigham and Mol, and another on "The Pony" with Winter, Shannon, Charlie Cox (who plays Owen Sleater) and Meg Chambers Steedle (who plays Billie Kent). Disc Four has one on "Two Imposters" with Korder, Coulter, Buscemi and Williams, and Disc Five has one on "Margate Sands" with Winter, Van Patten, Cannavale and Chris Caldovino (who plays Torino). Generally the tracks are not bad, with Coulter's participation being one I personally took notice of and hope he does more of. And for the relevant stars in each episode, they get some ribbing, with Cannavale in "You'd Be Surprised" being a prime suspect. They have some information but are lighthearted and worth listening to. 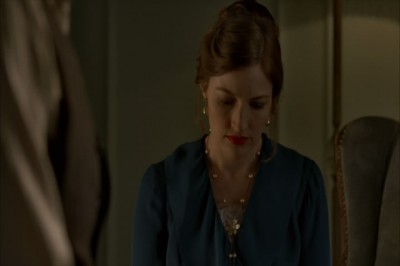 The remainder of the extras are nothing to sneeze at either, with one on the first disc and the balance of the rest on the last disc. Disc One has "Distilling Season Two" (14:22) where Winter gets into both the nitty and gritty of the season from beginning to end and teasing future storylines to boot in what is ultimately a comprehensive segment. On Disc Five, "American Empires" is an interactive feature which examines the players, their regions and their city-specific locales. Pictures of the historical figures are included where necessary and it transitions nicely from a large region to places within a city in that region and those who helped shape it. It is a nice feature. Moving on, "Director's Chair" (29:56) in an extended look at the show from Van Patten and Coulter, who are responsible for most of the show's direction. They discuss their approach to receiving a script, right down to the script notes. They move even deeper, getting into scene breakdowns on the episodes they directed, including thoughts on shot intent, specific counsel given to the actors and any additional things such as computer effects or explosions which may need to be considered. On its own it is a superb feature. "Scorsese on Season Three" (4:34) is a fairly self-explanatory piece from the legendary director who also serves as the show's Executive Producer. He talks about the cast and his thoughts on them, where the show was at the end of Season Two and where it goes in Season Three. HBO has decided to not only include discs that house standard definition copies of the season in a separate sleeve, but a redeemable code for digital copies of same should one find themselves having the urge.


In a world where shows on the AMC network dominate dramatic television and shows such as Homeland have announced their presence on pay cable, the third season of Boardwalk Empire reminds the viewer that they have a solid team of writers, directors and actors, given a Scorsese seal of approval. And in the show's third season, they may have done their best work to date. The discs are fantastic technically, and from a supplemental aspect are fairly exhaustive and easy to pick up on for even newer viewers to the show. The discs are a must-add to the library, they may be the best television discs of 2013.