With Hollywood's urge to remake virtually every memorable experience from prior eras into modernized tales that result in an unsatisfying experience, it could be understood that a remake of the cold war spy novel Tinker Tailor Soldier Spy could be met with a bit of trepidation. The John le Carre novel had already seen a dramatic interpretation with a 1979 miniseries which starred Alec Guinness. But would throwing a cavalcade of British acting talent at the material make people forget about it or be nostalgic for it?

Bridget O'Connor co-wrote the adapted screenplay with Peter Straughan (The Men Who Stare At Goats) which Tomas Alfredson (Let the Right One In) directed. Gary Oldman (Harry Potter and the Goblet of Fire) plays George Smiley, a former agent in British Intelligence called out of retirement to investigate the possibility of a double agent within the nation's Intelligence community after the death of an agent (Mark Strong, Green Lantern). No one seems to question Smiley's motivations for the investigation, so Smiley is dispatched to find the 'mole.' Smiley seems to have it narrowed down between Percy Alleline (Toby Jones, Captain America), Bill Haydon (Colin Firth, The King's Speech), Roy Bland (Ciaran Hinds, There Will Be Blood) and Toby Esterhase (David Dencik, War Horse). What makes matters interesting is the introduction of Ricki Tarr (Tom Hardy, Warrior), a discredited agent who possesses information about the mole which Smiley may find valuable to his investigation. 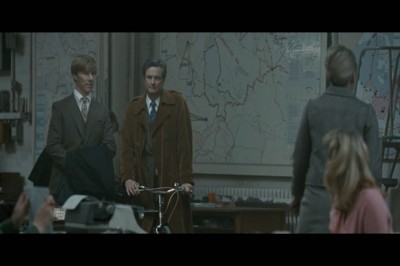 To those unfamiliar with the book or the previous adaptation, one of the things that you are taken by with this edition of Tinker Tailor is how deliberate the pacing is. This starts from the opening scenes, with extended moments of silence both at the beginning of the film and with Oldman's appearance (the latter of which finds the actor taking almost 20 minutes from the time he is on screen to the time he actually speaks). It is not a conventional thriller where many moments (sometimes employing a big action-packed stunt scene) occur, in Tinker Tailor they feel more organic and reactions are planned accordingly, instead of potentially foolhardy proactive tasks.

This is in no large part due to Oldman's performance which superficially looks (and sounds) like a Guinness tribute, but does more upon further reflection. The way Smiley works is that he tends to be pragmatic when seeing these events fall into his lap. Smiley does not seem to misstep in his investigation, and when he circles around someone who may have some valuable information, the pressure he puts on them is precise and calculating, but serves as the truth. He not only reduces grown men to tears in more than one circumstance, but because he looks at these men as obstacles to his mission. Seeing Oldman stifle any sort of personal volatility as he interacts with Firth, Dencik and other members of the group is a surprising change of pace and well worth the time in investing. 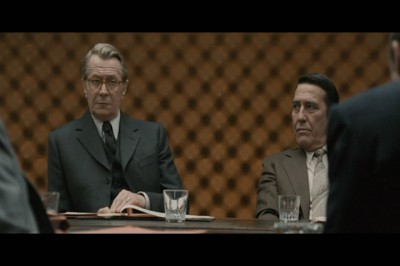 In an era where remakes are stripped to their essence and as much as possible occurs within a 90-100 minute timespan, Tinker Tailor Soldier Spy separates itself in that one could insert this incarnation back into the '70s and seemingly pull it off without a hitch. The lack of action helps to build the suspense, and seeing some of these characters' intentions become revealed is intriguing and engaging throughout.


Universal presents Tinker Tailor Soldier Spy in its 2.35:1 anamorphic widescreen glory, with the result staying true to the film's release and vintage appearance. The film's browns, grays and smoky environments are replicated accurately and without complaint, with no discernible edge enhancement or haloing that I could spot immediately. Film grain is ample and evident through the viewing experience and there is little image noise or post-image processing which results in a distraction. When you see brains stuck to a wall that drip onto a floor, you KNOW the transfer's good!


Dolby Digital 5.1 surround is the flavor for this particular meal, with the result being an interesting one. The movie's soundtrack is one that is not sonically active (most of the events occur quietly and in soft-spoken or acting moments), but there is directional effects in moments where it may be required, such as one early in the film where Smiley and the other members of the organization are sitting around a table. The end sequence includes a solid rendition of "La Mer" which sounds good through the speakers and combined with the low thud of a bullet hit gives on the impression the track could do more if needed, but is worthwhile listening material nonetheless.


Almost all of the extras here mirror that of the combo pack save for the various interviews on the latter. As far as the standard def disc goes the extras are OK. Things start with a commentary from Oldman and Alfredson which is light in terms of the information. There is lots of watching of the film and Oldman discusses his work with the cast and thoughts on the material, and the production recall is average. There is a moment where Oldman remembers a location for the film being one that he was on for one of the Batman films, but that is about as good as it gets in terms of liveliness. From there, six deleted scenes (6:09) offer little to the mind, save for a mesmerizing one-camera shot of Oldman making and eating breakfast. There is also a preview/first look at the film (13:01) which includes not only the requisite thoughts on the source material from the cast and director (who share the same requisite thoughts on their characters and working with one another), but le Carre talks about his motivations for the story. The production, location and wardrobe design even gets the last couple of minutes of this extra as well, but overall this is mostly topical and hardly revealing.


Tinker Tailor Soldier Spy is a change of pace within the spy/thriller genre for both its adherence to/love of the Cold War era and letting the characters' actions speak as much as the story does, and the performances back them up. Technically it is a solid disc though it tends to lack on the supplements side of things. If you have a Blu-ray player then the combo pack becomes a better value proposition for you, but this is absolutely worth your time to check out, be it high or standard definition.