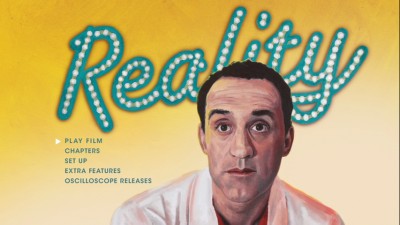 Gomorrah director Matteo Garrone applies his meticulous, flowing style to much lighter fare this time around in Reality, a social satire about a thoroughly modern condition: one man's obsessive fantasy about being a reality TV star.


Fish seller and small-money swindler Luciano (Aniello Arena) lives in Naples with his extended family, where he hustles to make ends meet. Considered the funny one of his clan, he is pushed by his daughters into trying out for "Big Brother" when they are holding auditions at the local mall. After Luciano gets a callback and goes through the second stage of auditions, he becomes convinced he's made the show and tells everyone so. The longer he has to wait, however, the more paranoid he becomes, even as his belief that he will join the cast grows stronger.


There are strange turns ahead, as Luciano goes off the deep end. Convinced his past sins are what's causing his roadblock to stardom, he tries turning over a new leaf, transforming himself into a 21st-century apostle. Garrone, who collaborated on his script with three other writers, follows Luciano every step of the way, observing instead of judging, letting the actions speak for themselves or sometimes giving baffled friends and family the spotlight so they can play straight man in Luciano's tragicomedy. As with Gomorrah, Garrone stages long takes, allowing the action to occur in a semblance of real time. He also uses real places and real people, which here allows him to highlight the division between the common populace and the so-called celebrities we exalt for no apparent reason.


Cinephiles will appreciate the nods to Fellini, who certainly would have had a field day in the current showbiz landscape, but they'll also be saddened by seeing the fabled Cinecitta Studios giving over so much of its real estate to the "Big Brother" house. From Ben-Hur and La Dolce Vita to girls in bikinis brushing their teeth. Well, then again, Fellini might approve. 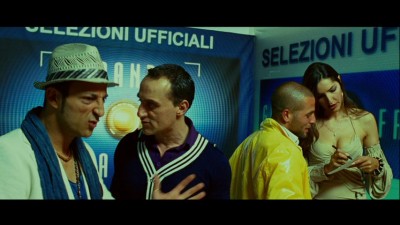 
The full-color transfer of Reality is presented at the original 2.35:1 aspect ratio. The widescreen image is first-rate, with strong detail and resolution as well as vivid colors. Marco Onorato's photography plays with the delicate balance between Technicolor illusions and the gaudy reality that sometimes mirrors cinematic excess, and his careful choices are rendered with brilliant clarity on this DVD.


The film's Italian soundtrack has been remixed in 5.1 surround, with a second 2.0 stereo option. While we often tend to think of loud action movies when thinking of all the ways sound can be used to enhance viewing, there is also much that should be said for a movie like Reality, that uses small touches and ambient noise to create a convincing aural atmosphere, adding to the believability of what we see on screen. The Dolby mix here is nicely done, utilizing all the speakers and the full space of the room they occupy. The quiet moments are balanced well against Alexandre Desplat's excellent score.


Optional subtitles include English and French. 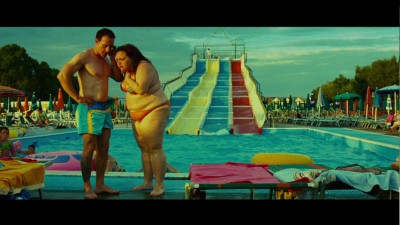 
There are lots of informative extras here, including a detailed, 23-minute interview (in Italian) with director Matteo Garrone where he outlines his intentions of the film, the writing and the casting, the shooting technique, and more. We also see the director and his crew at work in the 20-minute documentary Dreams are Reality, while a second documentary, Inside Reality, looks specifically at the music, effects, and production design, giving us just over 9 minutes of scoring sessions, artwork, etc.


There are four deleted scenes, most about a minute in length, with the longest one being over 3-minutes and featuring Luciano in the "Big Brother" confessional. The most interesting might be the traffic jam clip, though, just because it is so beautifully lit and shot.


Perhaps of particular interest, though, is the 13-minute profile of Aniello Arena, who famously shot the film while on work leave from prison. The piece focuses on his roles with the prison's acting company, which he joined in 2001, giving the gangster a new lease on life. There's lots of footage of rehearsals and performances from these productions.


Finally, there is a theatrical trailer included.


The latest from Matteo Garrone, Reality, is a marvelous dissection of modern celebrity culture and the way the false promise of television success can cause big dreams to fizzle for an average person. Acted with equal parts audacity and empathy by first-time cinema star Aniello Arena, Reality follows one man's quest to get on "Big Brother," and the self-delusion that just might land him there. It's a movie that is grand in scope, and meticulously designed to be larger than life, but that's also personal and intimate. Highly Recommended. 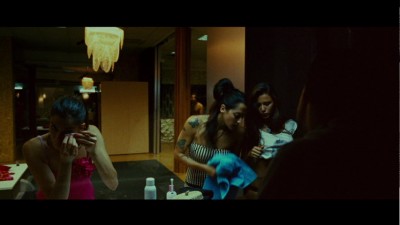