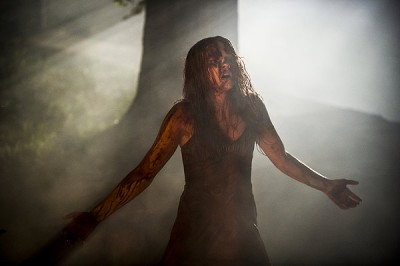 I'll let the Carrie devotees debate whether the newest redo is a remake of the Brian De Palma horror classic or a fresh adaptation of the original Stephen King story; regardless of how you categorize it, Carrie White is back, and the 2013 iteration works perfectly well, even if it doesn't entirely stand on its own two feet.

Making only her third movie in two decades, Boys Don't Cry's Kimberly Peirce takes charge here, working from a script by original screenwriter Lawrence D. Cohen and Big Love scribe Robert Aguire-Sacasca. Kick-Ass' Chloë Grace Moretz, already the star of one questionable horror revamp (or two), takes over the role made famous by Sissy Spacek. Moretz is surprisingly good at looking uncomfortable in her own skin, an essential aspect of the Carrie character. The teenager is an outcast at school, naïve to the ways of the world, having been mostly home schooled by her sheltering mother (Julianne Moore), a woman plagued by religious delusions. The film literally begins with Carrie's birth, introducing us to a life that wasn't supposed to be, before jumping ahead to where it all finally goes wrong. 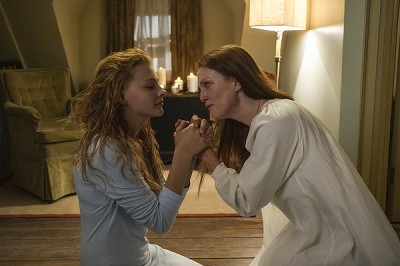 There is not much that's different here in terms of story, except maybe cell phones. A locker room hazing over Carrie's first menstruation also becomes the first manifestation of the girl's telekinetic powers. The fall-out from the incident causes one girl (Portia Doubleday, Youth in Revolt) to swear revenge on Carrie, and another to repent (Gabriella Wilde). The guilty girl gets her boyfriend (Ansel Elgort) to take Carrie to prom as penance, unwittingly providing the mean girl with her perfect opportunity for the humiliation that will set off the climactic bloodbath. (Yes, you see what I did there.)

Carrie gets particularly good once prom is underway. A fairy-tale night ends up having real fairy-tale consequences. Carrie's lashing out is intense and frightening. Peirce's staging benefits from the advances in special effects since 1976. The psychic mayhem is every bit as brutal and cathartic as it should be. The director has Moretz unleash her powers in orgasmic bursts, a deliberate choice in a film full of deliberate choices. Peirce's Carrie offers a more feminist reading of the material, underlining the cycle of birth and death, as well as the cycle of the body, with reoccurring vaginal motifs, including one particularly obvious crack in a door through which Julianne Moore is reborn. Further proof to how exquisite the performer is, she manages to make it look less ridiculous than it sounds.

The camera serves less as a voyeuristic observer and more as a predatory device, stalking the girls in the pool, invading intimate spaces. The back and forth between Carrie and her would-be prom date deliberately shows her from above and him from below, mimicking the see-saw giddiness/nausea of adolescent romance. I'd daresay this is a better-made film than De Palma's, with a point of view that is more considered and less lurid.

The question, though, is whether or not that makes for a better Carrie. I'm not sure. The 1976 version has a visceral immediacy that is more engrossing, whereas the 2013 does little that surprises. Then again, it just may be a case of which you see first. Either will do, and as they say, dance (and slaughter) with the one that brought you. 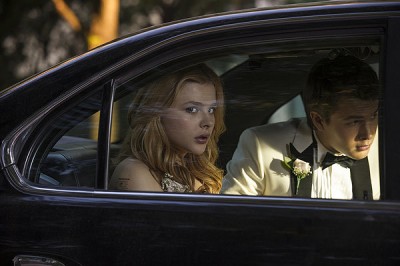