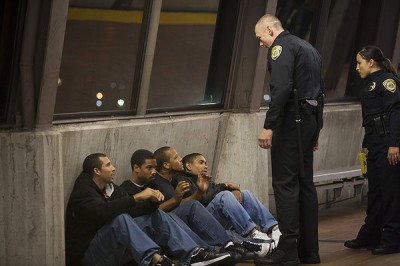 On January 1, 2009, Oscar Grant III was taking the BART train from San Francisco to his home in Oakland, CA, returning with a group of friends, including his girlfriend, from New Year's Eve festivities across the way. Just as the train pulled into Fruitvale Station, Oscar was spotted by some people he had a beef with from time he had spent in jail. An altercation occurred, and while the other half of the fight, all white, managed to get away before security arrived, Oscar and his group were pulled from the train and detained by BART police. Onlookers protested the harsh treatment of the men, all African Americans in their early 20s, and many recorded it on their cell phones. Right up to the point when one of the guards fatally shot Oscar, who was face down on the concrete, in the back.

Ryan Coogler's 2013 docudrama Fruitvale Station begins with that cell phone footage before backing up to the prior morning. Coogler's movie, which he wrote and directed, pieces together Oscar's last day. Oscar is played by Michael B. Jordan (The Wire), who attempts to portray the man in all his humanity, negatives included. As shown in the film, Oscar was in a difficult bind. Having recently lost his job at a grocery store, the unmarried father was facing some tough choices in order to keep feeding his little girl, as well as helping out his extended family when he could. Oscar was trying to stay on the straight and narrow and not fall back into slinging dope, even though that would be a quick and easy solution.

Not that Fruitvale Station focuses entirely on the less happy aspects of the day. December 31 was also the birthday of Oscar's mother (Octavia Spencer, who served as a producer, as well). Oscar spends part of the day planning for her party, which then would roll into the night on the town with his significant other (Melonie Diaz, Be Kind Rewind). Despite past mistakes, Oscar was a good son and father. He wasn't always the best boyfriend, but was generally courteous and helpful. As with anybody, he wasn't all good or all bad, he was just a regular person.

Coogler attempts to emphasize just how regular throughout his telling. One doesn't get the sense that he's trying too hard to scrub up the man's image. Jordan brings an undeniable charisma to the screen, but he is also as natural in front of the camera as Coogler needs him to be. The first-time director never gets fancy in how he puts Fruitvale Station together. Cinematographer Rachel Morrison (Some Girl(s)) avoids tricky angles or showy techniques, eschewing the usual shaky-cam aesthetics so many others use in order to simulate "realness;" rather, Morrison keeps it as straight as possible, using low-key lighting and maximizing her locations to give Fruitvale Station an immediacy that really pays off. By the time Fruitvale Station reaches the tragic incident, we are so invested in the story, there is no getting out of it. Coogler doesn't oversell the key scene. There is no need to underline the injustice of what happened with anything declarative; Coogler's staging allows for the events to speak for themselves. The rawness of the abuse and the shooting is nauseating.

Which isn't to say that Fruitvale Station isn't without its faults. There are several portentous rumblings leading up to the night going wrong, characters expressing a bad feeling, Oscar's daughter mistaking fireworks for gunfire, and the like, that even if based on actual accounts, smack of witnesses allowing hindsight to amplify small moments or coincidences. It's like Coogler wants to make sure we don't forget how bad it's going to get, as if the legitimate footage at the outset was not enough.

Regardless of the dramatic license the filmmakers may or may not have taken, it does not lessen the impact or the importance of Oscar Grant's story. Whether we look at it from a racial angle or frame the events in a political context, the basic inhumanity and injustice speak to our times. Try to watch Fruitvale Station as a blank slate, challenging your own perceptions and prejudices as you do. You might be surprised by how it affects you. 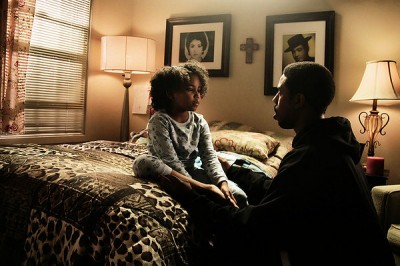 Video:
Fruitvale Station is being released as a 1080p high-definition transfer at a 1.78:1 aspect ratio. The stark photography looks excellent, with nicely rendered colors and strong detail that maintains natural skin tones and accurate portrayals of the urban environment where the characters live their lives. Shadows look good, and the resolution is crisp throughout.

In addition to the BD, Fruitvale Station also comes with a DVD and a digital download.

Sound:
The original soundtrack is remixed as a 5.1 DTS-HD Master Audio track. The atmospherics are well tempered, with subtle interplay between the speakers and an approach to the audio that fits the realism of the story. (The DVD audio is Dolby Digital 5.1.)

Extras:
I was looking forward to the featurette "Fruitvale Station: The Story of Oscar Grant" (21 minutes, 27 seconds); unfortunately, instead of being a more journalistic look at the real Grant as the title might suggest, it's more like a promo dressed up with a message. While legitimate issues of race and discrimination are broached, the program is couched in self-congratulatory posturing by the filmmakers.

The Q & A with Cast & Filmmakers (27:29) piece is a pretty good post-screening discussion, shot at an Oakland showing in July 2013. On stage are the three leads, director Coogler, and producers Nina Yang Bongiovi and Forest Whitaker. The program is moderated by Bay Area journalist David D.

FINAL THOUGHTS:
Highly Recommended. A remarkable debut feature from writer/director Ryan Coolger, the based-on-true-events docudrama Fruitvale Station is a real eye-opener, turning the spotlight on a horrible tragedy and unnecessary death that touches on a lot of difficult topics that relate to our times, particularly given the ongoing debate about "post-racial" America. Yet, amidst it all, and aided by an outstanding performance from The Wire's Michael B. Jordan, Coogler never loses the focus of the narrative: the man who died. Oscar Grant III, was not a political pawn ready to take his place in the struggle, but a human being whose life was cut short. It's as straight a telling as you're likely to find, and all the more affecting for its simplicity. 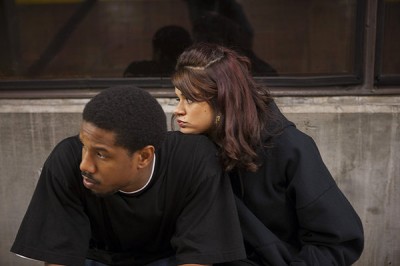