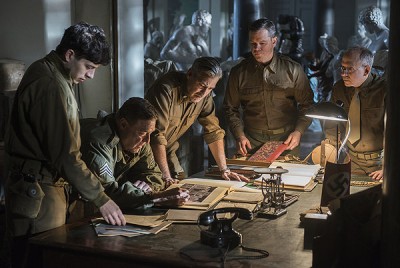 George Clooney has long been considered the last great movie star, the true heir to the suave mantle of classic Hollywood actors like Cary Grant and William Holden. It should be no surprise then, that as a director, he has increasingly gravitated toward projects that hearken back to the Golden Age of moviemaking. Clooney is consistently bold in his acting choices, including extended relationships with both Steven Soderbergh and the Coen Bros.--and even there, he participated in Soderberg's Casablanca-riff The Good German and worked with the Coens on the Preston Sturges-homage Intolerable Cruelty, both highly underrated gems. Though no less bold, his own efforts display a facility for classic cinematic storytelling.

It's been several years since his unfairly ignored football comedy Leatherheads and his contemporary political thriller The Ides of March, but Clooney has at last moved back behind the camera for The Monuments Men, a World War II drama that eclipses Leatherheads in scope but maintains the same focus on character that you often find in movies helmed by actors.

The Monuments Men is based on the real-life story of a group of scholars and artisans whom the U.S. Army tasked with hunting down and rescuing European art treasures stolen by the German army. As Matt Damon's James Granger says in the movie, Hitler really wanted it all, cleaning out museums, cathedrals, and private homes in countries the Nazis invaded. At the tail end of the conflict, these treasures were shipped en masse via truck and train to parts unknown.

Clooney plays Frank Stokes, a professor who loves art and sees a need for action. He recruits a museum curator, a sculptor, an architect, and a theater director to work with him overseas. They are played, respectively, by Damon, John Goodman, Bill Murray, and Bob Balaban. These American citizens-turned-soldiers are joined by one Brit (Downton Abbey's Hugh Bonneville) and one Frenchman (The Artist's Jean Dujardin). It's a hell of a cast. The troupe also features Cate Blanchett as a member of the French Resistance who may be the only one who knows what was taken and where to. It's Damon's job to convince her to trust the Americans to do the right thing and give the pilfered goods back. He spends most of the movie in Paris trying to prove he's the real deal. 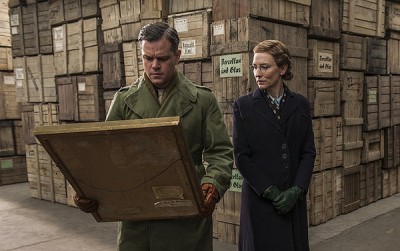 Meanwhile, the others advance toward Germany, splitting into pairs and chasing down clues while also trying to prevent even more artifacts from being stolen. It's a race against the clock. On one side, the Germans are known to burn everything when they start losing, preferring to destroy their ill-gotten gains rather than let anyone else have them; on the other side, there is a Russian equivalent of the Monuments Men confiscating the loot for themselves as reparation for their country's loss.

Though this would imply a straight-lined plot, the script for The Monuments Men, which Clooney co-wrote with his long-time creative partner Grant Heslov (The Men Who Stare at Goats), is more episodic, in keeping with the historical nature of the piece. War is fought in fits and starts, it's not one long march. Plus, with the different Monuments Men scattered all around Europe, they aren't exactly planning an Ocean's-style heist. 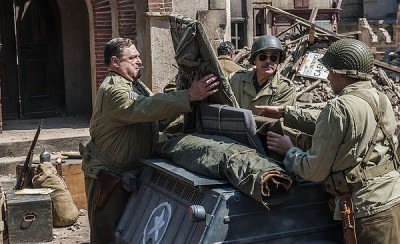 This approach works, and it's largely thanks to the casting. Clooney has chosen his pairings wisely. Damon/Blanchett, Goodman/Dujardin, Murray/Balaban--I could watch extended cuts of each of the three duos interacting in their own movies and probably never tire of their antics. The tone shifts from funny to sentimental to grave and serious with nary a hiccup. Clooney sees all the pieces clearly, and he fits them together nicely.

The Monuments Men reminds me of older light-hearted WWII movies. It could have easily starred the aforementioned Messrs. Grant or Holden. Or even Henry Fonda. And I could see Billy Wilder directing it. The Monuments Men is more Stalag 17 than Hogan's Heroes. It keeps some of the darker aspects of the war at arm's length without pretending they didn't exist. The movie also hits a lot of familiar points without resorting to all the expected clichés. Like a greatest hits reel of the movies Clooney is emulating without the worn-out punchlines.

It makes for a pretty damned good time. I laughed quite a bit and teared up once or twice without ever feeling like a sucker for doing either. The Monuments Men is a marvelous ensemble piece with all kinds of smarts and a good smattering of schmaltz. It's George Clooney playing a journeyman's game. Please go see it so it makes scads of money and he doesn't wait another three years to direct again. 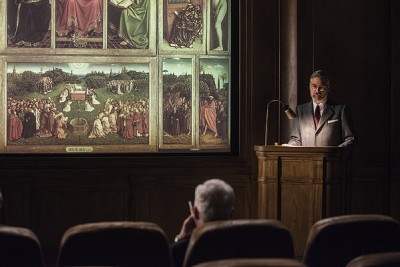