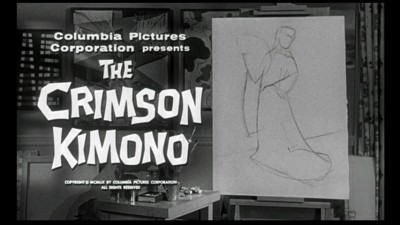 Samuel Fuller has a history of progressive, charged films about social issues, including multiple films about race. Shock Corridor famously upended the debate by having an African American in a mental institution who believed himself to be a high-ranking member of the KKK, while his controversial later movie White Dog was about a canine trained exclusively to kill black men.

Before both, however, came The Crimson Kimono, a two-fisted crime movie just on the other side of the film noir movement. Written and directed by Fuller, The Crimson Kimono stars Glenn Corbett and James Shigeta as two Los Angeles police detectives working the Little Tokyo beat. Charlie is white, and Joe is American-born Japanese, and their partnership was first forged in combat during World War II. (A veteran himself, Fuller shows his respect for the troops with insert shots of L.A. memorials for the Asian American soldiers that served--a short pause in the action but not out of place amongst other gritty shots of the Southern California streets.) The pair catches a case that will take them deep into the back alleys of their jurisdiction. A Caucasian stripper is chased out of a nightclub and shot on the sidewalk, and the one possible lead to the shooter's identity is a painting of the woman in traditional Japanese garb. It is signed "Chris."

Chris is short for Christine, not Christopher. Victoria Shaw plays the painter, the only one who can identify the mysterious Hansel that art directed the portrait, a promo for an act that the dead woman was putting together. Both Charlie and Joe fall for Chris (and who can blame them?), but things only get dicey when she also falls for Joe. The murder plot takes a backseat to the romantic melodrama. Fuller spends a long time on Joe and Chris talking about art and music and Joe's family. While any interracial relationship on film in 1959 would have been surprising, what makes The Crimson Kimono really interesting is that the one doubting the viability of their getting together is Joe, and it's not even because he's Japanese. At least not at first. Joe's initial misgivings come from not wanting to hurt Charlie. Only as the truth comes out does it become more about prejudice, though it's a prejudice that many argue exists only in Joe's perception. All the white folks are fine with it! 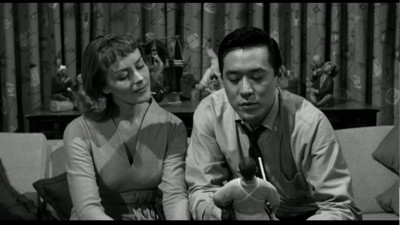 The Los Angeles that Fuller depicts in The Crimson Kimono looks like some kind of fantasyland. One can imagine James Ellroy chortling while watching this idyllic image of harmony in the City of Angels. It's as if Fuller were daring people to make a better world by putting up his own example on the movie screen. He even goes out of his way to include plot elements that require the characters to differentiate between Chinese, Japanese, and Korean players in the drama. There is no sidebar racist to contradict and demand no one cares, they all look alike. Fuller's Asian community is a smaller melting pot inside the greater national melting pot.

Not that The Crimson Kimono is some kind of Stanley Kramer-style message picture. Fuller is far more stealthy than that. All of these added elements are merely part of the usual rough-and-tumble pulp story the director was known for. What makes his films so politically interesting is that whatever was being explored, be it Communist subversives in Pickup on South Street or the "fallen woman" scenario of The Naked Kiss, it was always a natural part of the narrative. For as unnatural as his storytelling generally was, the rawness was a reflection of the world around him. To Fuller, these were people with specific problems and concerns, and it just made sense to include everything that made their lives what they were. It wasn't subtext, there is nothing "sub" about The Crimson Kimono, it's all just text. 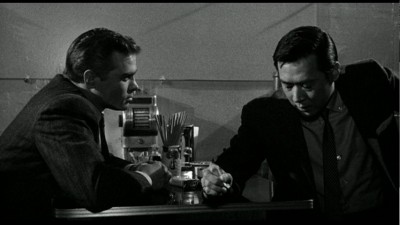 Video:
Part of the Sony Choice Collection, a manufacture-on-demand specialty label, The Crimson Kimono has been released as a widescreen black-and-white disc, most likely working with similar elements as the boxed set that previously housed the film. Image quality is slightly above average, with a clear picture that is mostly free of blemish but that is sometimes overly grainy and soft.

Sound:
The mono soundtrack is pretty good. Dialogue is easy to hear, and music sounds swell, with no distortion or extraneous noise.

FINAL THOUGHTS:
Highly Recommended. Samuel Fuller's 1959 hardboiled crime drama The Crimson Kimono tackles expected subjects like sex and murder, but as part of a larger narrative about race and the basic connection between human beings. In this case, a Japanese American police detective played by James Shigeta falling in love with the white witness Victoria Shaw, and him having to learn to stop worry about the prejudicial monsters he imagines under the bed and allow his passions to catch fire. The murder plot that brings them together gets short shrift next to the romance, but the kinetic fight scenes and the prevailing daring of the production overcome such complaints. An oft-forgotten Fuller gem. 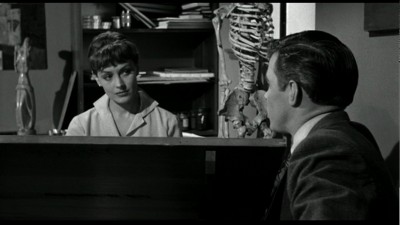