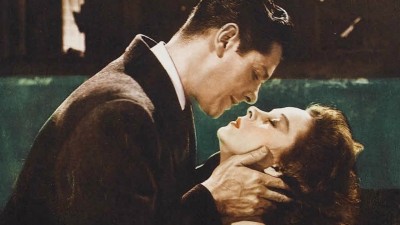 It would seem that in the wake of success of both the 1939 version of Wuthering Heights and perhaps even more so Alfred Hitchcock's Rebecca in 1940, a slew of brooding romantic period pieces followed. Olive Films has started to corner the market on these. They have Fritz Lang's The Secret Behind the Door, and Max Ophüls' Caught, and now The Lost Moment from 1947. Based on a Henry James story, and directed by Martin Gabel--who then went on to be a minor actor in films like Fourteen Hours and TV shows like "Have Gun, Will Travel"--this feverish tale of love and madness most closely resembles Hitch's Du Maurier adaptation, at least in the superficial details.

Though most of its genre cousins focus on a woman entering a difficult emotional situation, The Lost Moment shifts its lens toward a man. In this case, a determined American. Lewis (Robert Cummings) is a publisher fixed on securing the rights to the love letters of a long-dead romantic poet. The object of the author's verse is said to still be alive in Venice, Italy, despite being more than a century old. Lewis has secured a room in her house under the guise of being a writer seeking inspiration. The old woman, Juliana Borderau (Agnes Moorehead, completely unrecognizable cloaked in shadow and makeup), is too frail to keep her affairs running, so she is assisted by her icy young niece, Tina (Susan Hayward). Neither woman trusts this man, but Juliana seems to have some purpose for letting him hang around, one that extends beyond the rather exorbitant rent she is charging him.

And so Lewis spends his days pretending to write while snooping around for details about Juliana's past with the poet. He makes friends with the shy maid (Joan Lorring) and tries to wheedle answers out of the local priest (Eduardo Giannelli). This bears little fruit, and Lewis continually comes up empty until the fateful night he discovers Tina in the opposite wing of the estate. She has let her hair down and swapped her drab clothes for a flowing white dress. The change is because, in her mind, she is no longer Tina, but Juliana. She has delusions of living in her aunt's past. Stepping into this, Lewis becomes the poet, who at some point disappeared from Juliana's life and the public eye.

The Lost Moment title, then, refers to whatever it was that happened to the young man, and also to Tina's own break from reality. The rest of the house is aware of her condition, but they are enslaved to it as much as Juliana herself is enslaved to the museum her own home has become. History holds sway over all. Juliana insists the only reason she is alive is because of her house, and were it to go away, she would surely pass on, too. Secrets are buried in every corner, so there is more to find than even what Lewis seeks.

Gabel approaches the lurid melodrama with sincerity, playing up the literary qualities of the story while indulging in the sumptuous set decoration, both in Juliana's massive home and also the brief excursions out into Venice. Ivy allows for an effective visual motif, both outdoors and in. Time may have stopped for the Borderau women, but it persists all around them. It creeps like mold. For a one-time director, Gabel manages some complicated moves. A garden chase, a raging fire, and a sequence where an animated bird zigs and zags around Cummings all show a surprising grasp of complicated film language. His balance of interior and exterior, both in terms of actual set pieces and the more metaphorical inner and outer landscapes of the mind, is quite impressive.

Cummings (Sleep, My Love) serves as a blank slate, often more observer than participant, and it's a role he's well suited for. As an onscreen personality, his talents are limited; he was made to be a placeholder. Hayward (I Married a Witch), on the other hand, has lots of room to shine here. Her performance could easily have relied on wardrobe and hair to differentiate between Tina as herself and Tina as Juliana, but the actress does enough with posture and expression--the way she carries her shoulders, the tightly set jaw--that the differentiation isn't really necessary. She shows fantastic range, and her spooky moments living out her fantasy bring to mind Vivien Leigh's turn as Blanche DuBois in A Streetcar Named Desire only a few years later.

The only thing that The Lost Moment lacks is a wider breadth of character. There are no scenes where any of these participants get to step out of their types and be something else. The closest we get is a dinner date where Lewis and Tina get to know each other away from her aunt's influence, thus making it plausible that they can fall for one another outside of the illusory evenings where they are understudies for phantoms rather than themselves. It's a bit rushed, however, particularly since the film finishes not long after. Even so, The Lost Moment maybe benefits from the brevity. As they say, leave them wanting more; it's generally better than piling on too much. 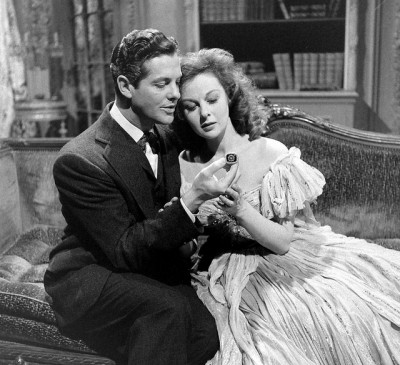 Video:
The black-and-white full frame image of The Lost Moment, mastered here for HD at a 1.33:1 aspect ratio, is quite good, though not perfect. Resolution is sharp and detail is clear. You can especially appreciate the tight framing on Agnes Moorehead's withered hands, or the special effects of the bird trapped inside the house. Yet, you will notice some vertical lines and other marks on the screen from time to time.

Sound:
The mono soundtrack is clear and clean with no glitches or distortion.

FINAL THOUGHTS:
Recommended. Martin Gabel's Henry James-adaptation The Lost Moment may be the actor's only directorial effort, but it's a fairly strong one all the same. Robert Cummings stars as a conniving publisher looking to secure the love letters of a long-departed romantic poet, sidling up to Agnes Moorehead, the aging recipient of those missives. The letters are hidden somewhere in her spacious home but it's really Susan Hayward who rules the roost, and so it's her madness Cummings must really contend with. Hayward gives a spectacular performance in a claustrophobic film that lays on the atmosphere and the emotion, even if the story sometimes seems a little skint.