There have been many films that adapt extensive works of fiction and they tend to arrive to mixed reaction. The common thread of these films (or a talking point from those involved with them) appears to be ‘everything is connected,' as they cover a variety of eras and characters. Apparently Winter's Tale is the latest to try to handle such a task, the last one that comes to mind being Cloud Atlas. So let us see what merits there are for it, shall we?

From the Mark Helprin novel, Akiva Goldsman (A Beautiful Mind) adapted a screenplay which he directed. Set in New York, we first see a pre-turn of the century couple arrive in the city with their infant son, but are turned away because the parents have consumption. The boy is released on a small boat by the parents and presumably returns to the city. Flashing forward twenty years, the boy is now a man named Peter Lake (Colin Farrell, Saving Mr. Banks ), who is a thief living on the streets. On a recent job, he accidentally encounters Beverly (Jessica Brown Findlay, Downton Abbey) and he immediately falls in love with her despite having tuberculosis. Peter has a foster parent of sorts in Pearly (Russell Crowe, L.A. Confidential), who not only objects to the relationship but wants to bring Peter back into the family despite his objections. The ensuing conflict is a battle between good and evil that few could anticipate. 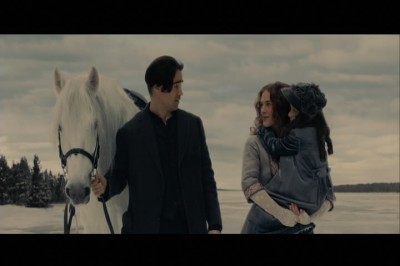 As one who does not mind when a film tends to have aspirations of touching upon grander things I can see the attempt that Winter's Tale makes to touch upon love, loss, good and bad. In addition, there are moments of emotion that are touching and prove to be resonant. However, it forsakes placing any sense of care for it behind a larger plot for its protagonist that while supernatural, simply is not told well enough to be engaging. The result is a mess where we see demons, the Devil, reincarnation and everlasting life of a sort. If the love story had been given a bit more focus the result would have been pretty good as well, but the mysticism is forced upon you early and explained poorly.

From a performance perspective, Farrell was quite good in fact. He tended to be more focused within Peter as opposed to possessing more flourish or even hammyness that pervades some of his previous performances. In a somewhat quieter manner than Matthew McConaughey, he seems to be undergoing a career transition where he is taking more roles that utilize more of his range more, and it is doing his craft well I think. Moreover, his chemistry with Findlay is tangible and believable, and can melt the coldest of hearts.

It is a testament to Goldsman that he was able to get Crowe and Farrell as stars of the film and sharing many scenes together, but just as amazingly is that there are at least two other stars in Winter's Tale whose appearance can only be described as a shock. Neither of them I am going to spoil, but one I could go either way on, the other was a pleasant surprise to see and really helped bring a sense of cloture to the Peter and Beverly relationship. 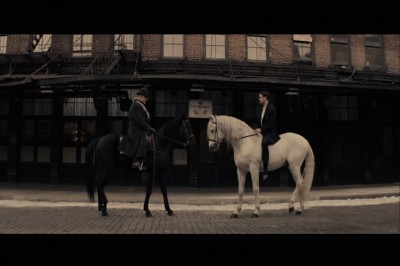 The casting and performances of some aside, Winter's Tale tends to get lost in the source material. Aside from the whole love conquering all, remaining timeless type of thing, seeing the poorly executed back-stories of Peter and Pearly do not do the film any favors. Compared to Cloud Atlas or The Fountain that have similar aspirations, they tend to follow them while paying attention to the smaller messages as well. That deficiency is the fatal flaw in Winter's Tale.


The AVC encode for Winter's Tale is in 2.40:1 widescreen and high-definition and looks excellent. Image detail, whether it is fibers in clothing or textures of wood in doors or pores on faces, is strong and consistent throughout. Colors are reproduced nicely and the red in Beverly's hair looks natural and individual hairs can be easily spotted. Black levels in it are deep and inky and present a nice contrast to the many different evening shots or those against the snow, the whites of the latter looking natural and not hot whatsoever. Quality work from Warner on this.


The DTS-HD MA 5.1 lossless surround track is also up to the work in the film that is nice to experience. Dialogue is well-balanced and a track which requires little in the way of compensation. The final act battles have a convincing level of low-end fidelity to them, but the subwoofer fills in any gaps in the action appropriately over the course of the time leading up to it. Directional effects and channel panning are present and convincing, the soundstage is broad and the overall immersion level of the soundtrack is quite convincing and well worth the time.


There is not all that much here. "A Timeless Love" (6:08) features the cast's thoughts on the story and Goldsman's thoughts on adapting it. It is quick and forgettable. Next is "Characters of Good and Evil" (9:14) where we look at the Farrell and Crowe characters and Goldsman talks about the actors along with the supporting cast. The stars share some insight on working with one another and how they came to Goldsman's production, even some opinions on and training of the horses! Otherwise, eh. Fourteen deleted scenes (12:08) includes more on the 2014 Farrell character and on Connelly's character and relationship with her daughter. Some of this stuff would have been better left in the final cut honestly. A standard definition disc (the source of the screen grabs) and an Ultraviolet copy of the film round things out.


Winter's Tale has nice ideas but does not express them as clearly or effectively as they could have. Technically, the disc is a jewel, but the lack of substantive extras to help illustrate the effort put into the story (or about the novel even) helps go against it a little further. If one were compelled to see this, I would recommend seeing it for Farrell's performance and not much else. Similar films have handled the bigger themes about love and/or time travel better than this one does.