One of the movies that comes to mind for me as I started writing the review of Cloud Atlas was the underrated Darren Aronofsky film The Fountain. Both films covered characters over multiple time periods, both films had characters played by the same actors, and both films cover broad concepts of live, love, and/or the whole ball of wax. While The Fountain may have come and gone with a whimper, Warner Brothers stirred buzz on Cloud Atlas months in advance with a six-minute trailer full of breathtaking visuals and soul-stirring music. Now that the film is on video, can we truly judge if its head was as big as its heart? 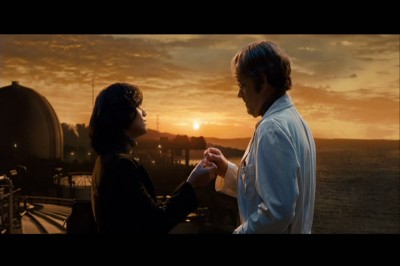 The film is based on the novel by David Mitchell. Tom Tykwer (Run Lola Run), and the Wachowskis (The Matrix) adapted it into a screenplay and co-directed as well. Here is where things start to get tricky: the film's story takes place over six time periods and locations that the film steps in and out of with little trouble; there is the South Pacific in the mid-19th century, pre-World War II England, 1973 in San Francisco, present-day London, 22nd century Korea and a 23rd-century dystopian Hawaii. Using a variety of makeups, bald caps and what have you, the same core of actors share roles in virtually all of these locations. The group includes Tom Hanks (Toy Story 3), Halle Berry (New Year's Eve), Jim Broadbent (The Damned United), Jim Sturgess (21) and Doona Bae (The Host), to name a few. There are other actors whose names would be recognizable, but I'll omit them and the roles they all play as much as possible in order to keep the surprise fresh for those who have not seen the film.

One of the complaints people have had about the film is that the many different eras and common actors can prove to be confusing. Generally I think this complaint is overblown; each period is set up rather nicely in the first act and you can keep up nicely. When events get somewhat pear-shaped for the characters you can still keep a general good eye on things without much distraction. However, this is not to say that the story being told is all milk and honey. A couple of the supporting characters in the eras are unnecessary in their place in the large Cloud Atlas universe. One character could be described as a typical Wachowski character and another ticks off story mechanisms as if he was still on set from Lady in the Water. These characters are in each director's story, which is to say each director shares part of the blame with these inclusions, despite splitting half the film between them. One can also point out who directed which period fairly easily before the end titles show us who did what. This can be discerned not only with the visuals but with the events that go on in the story. I like the Wachowskis and I think what they have done and continue to do in science fiction is amazing, but at times their work in the film feels like a bit of a one-trick pony. 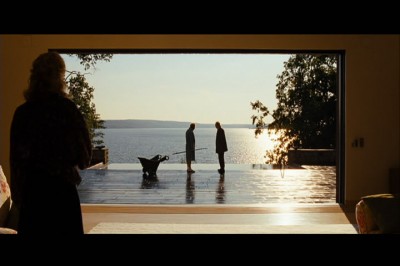 While I may have a problem with portions of the film, the fact that the directors and cast manage to juggle the numerous roles as effectively they do is fascinating to watch. Hanks and Berry are very good with their performances, but it is Sturgess and to a lesser degree Ben Whishaw (I'm Not There) who are genuinely surprising in their roles. Many of the characters have a conflict which forces them into bold action at times, and those two in particular handle it in touching manner. Hanks and Berry may serve as the moral center of Cloud Atlas, but the characters Strugess and Whishaw portray are its heart, and they uplift the movie in an unexpected direction.

In watching the bonus material, Hanks is asked about the story: "It Made Sense to you?" Hanks answers "No," but says it not with frustration or scorn, but a sense of wonder. Is it the audacity of the production? Is it the beauty lying within the story? Is it how the story is told? One does get the feeling there is an emotional profundity lying within Cloud Atlas, the problem is many people will be frustrated by not being able to unlock it. I admittedly could not, but I loved the ride, and will continue to do so on films with a scale such as this.


Warner rolls out an AVC encode for Cloud Atlas which is excellent. Image detail is abundant in the foreground and background, and colors reproduced superbly. Whether it is the lush island greens of the past, the browns of the early 1970s, or the glowing blues of the future, colors are vivid with little in the way of noise or crushing. Film grain is present during viewing and no prolonged bouts of DNR will deter or distract from the viewing experience. The visuals of the film look better than anticipated with this Blu-ray.


The DTS-HD Master Audio 5.1 surround track the film has is formidable to be sure. Dialogue sounds good and in the front of the listening area, with the amount of ambient noise and directional effects in the rear channels being ample. Channel panning is present and effective, and when called into action, the subwoofer engages convincingly and providing a comfortable low end the soundtrack uses wisely. Compared to previous films this may not be the aural manna that Wachowski fans are used to, but it handles everything the film tosses at it with ease.


There was some mild confusion over the Cloud Atlas Blu-ray in that many expected it to be released several months ago, and perhaps the delay was speculation that some über-edition was in the works, but alas it is not to be found. However, several small featurettes do come with the disc. "A Film Like No Other" (7:15) includes the cast and crew sharing their thoughts on the story and the logistics of the production and two different crews. "Everything Is Connected" (8:00) examines the meaning of the storylines with Mitchell and the cast, while "Impossible Adaptation" (9:07) covers...the adaptation of the story and how the Wachowskis came to it, along with how the cast was presented it. "The Essence of Acting" (7:20) includes the cast's respective thoughts on the numerous characters they portray, and "Spaceships, Slaves and Sextets" (8:08) looks at the time-jumping and the music the film uses. "The Bold Science Fiction of Cloud Atlas" (7:14) touches on the futuristic aspects of the story, and "Eternal Recurrence" (7:39) is a final thoughts of sorts with the cast and crew. The package also has a standard definition disc and an UltraViolet code for streaming to complete things. 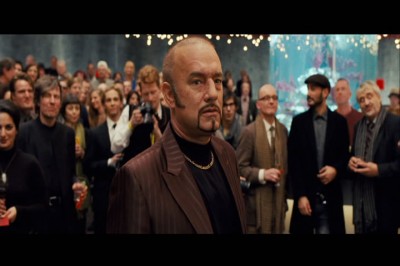 
In watching Cloud Atlas on back-to-back nights I picked up much more about the film on the second viewing than the first, including the film's vulnerabilities which people may use as justification for not seeing it. But it deserves to be seen, and if you have a large television, it is something you absolutely have to put on, consume and ponder the bigger themes that may be told, even if they are not told perfectly. Technically, the disc is a stunner and from a bonus material perspective, is not bad (though fairly hollow). Worth a rental at least with an eye to buying, especially for Wachowski devotees.