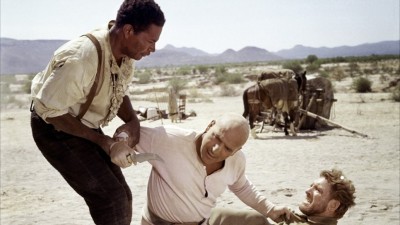 The western framed as a chase picture. A cowboy drama about racial politics. A well-meaning retooling of a classic genre for late '60s sensibilities.

The Scalphunters, directed by Sydney Pollack (Three Days of the Condor) from a script by William Norton (Gator), is all these things. Released in 1968, it stars Burt Lancaster as Joe Bass, a fur trapper heading back to civilization after a winter of collecting his wares. He is met along the way by Two Crows (Armando Silvestre), a Native American who, along with a few of his tribal brothers, forces Joe into an unfair trade. Two Crows takes his fur, leaving Joe with a runaway slave. Joseph Lee (Ossie Davis, Do the Right Thing) didn't toil in the fields, but instead worked in his owner's house, and so he has picked up a fair bit of education, including the ability to read and a fair knowledge of history. He and Joe don't much get along, partially because he is smarter than Joe and not afraid to tell the white man as much.

Joe isn't in the slave trade, so he wants to track down Two Crows and get his furs back. Only, by the time they catch up with them, the Indians are attacked by a group of white men looking to collect the bounty on Native American scalps. Led by Jim Howie (Telly Savalas, a.k.a. Kojak), these marauders slaughter the entire traveling party. They also end up getting their hands on Joseph, putting him and Joe on opposite sides of the line. Joe still wants the fruits of his labor returned, whereas Joseph would rather travel with the scalphunters to Mexico where slavery is illegal. He cozies up to Jim's lady (Shelley Winters, Lolita) to convince her to convince Jim not to sell him along the way.

Pre-Civil War race relations are pitted against a frontiersman's sense of right and wrong before giving over to the thrill of the hunt and Joe's dogged attacks on Jim's caravan. Lancaster is his usual solid presence, and his bantering with Davis makes for some of the best scenes in The Scalphunters. As far as revisionist westerns go, this movie is less about debunking the cowboy myth and more about shaking up some of our less nuanced ideas about how people got along. Lancaster's Joe is a more modern take on the dusty loner, while Davis offers a unique counterpoint to the usual clichés. The Scalphunters is far less interesting when it's merely shoot-outs and a string of schemes, including a rather clumsy rockslide scenario where the trapper sends a mountain crashing down on his enemies. Most of the action here is directed rather poorly. Pollack is bad at establishing a sense of place or keeping the fighters straight. The gunplay is chaotic and not very exciting.

Luckily, the film's climax brings it back to the personal arena, with the three male protagonists squaring off on common ground amidst a surprise turn that none of them saw coming--even if we are set up to wait for it rather early on. So, The Scalphunters is essentially well written and well acted, making up for a director who hasn't yet gotten his legs under him. 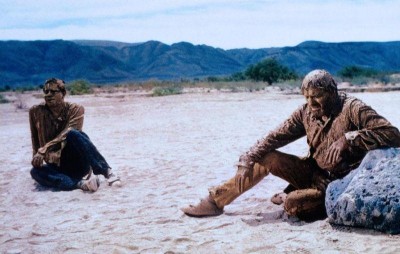 Video:
Kino Lorber's high-definition 2:35:1 transfer of The Scalphunters is fairly good. Colors have nice tones, and there is a solid level of detail, though at times the resolution can be slightly muted and the picture quality occasionally suffers from some marks and surface noise.

Sound:
The mono soundtrack is nicely rendered with clear dialogue and no distortion or extraneous sounds.

Extras:
The original trailer. It's not listed on the box, but it's on the disc.

FINAL THOUGHTS:
Recommended. Though the action doesn't quite match up to the progressive ideas, 1968's The Scalphunters makes for an interesting entry in the revisionist Western genre. Sydney Pollack directs Burt Lancaster and Ossie Davis as a cowboy and an escaped slave who clash over ideas about where they each rank in society, but who end up realizing that their individual survival generally hinges on many of the same things. The film devolves into a chase movie, which proves to be less compelling than the main duo's back-and-forth, but it remains entertaining through to the end.