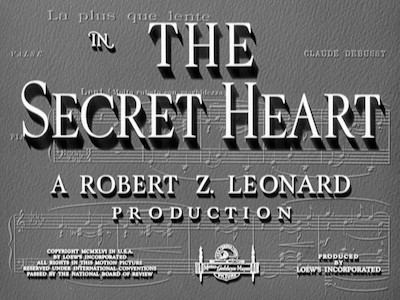 Life is never bright for the Addams family.

No, not that Addams family, the ones who live in a ghoulish house...well, okay, kind of like them, these Addamses do have a house of haunted memories, but not them. Not the one with Gomez and Morticia and Uncle Fester. Rather, the Addams family of 1946's The Secret Heart, with Claudette Colbert playing Lee Addams, the widow of a disgraced banker who killed himself and left her to raise his two kids.

Directed by Robert Z. Leonard (The Great Ziegfeld), The Secret Heart picks up a decade later, post-War, with the son of the dead man returning home. Chase (Robert Sterling, The Sundowners) has been away for three years, and he comes back to New York to find his young sister, Penny (June Allyson, Battle Circus), has retreated further into herself since he's gone. She took her dad's death really hard--and yet she doesn't even know the truth. He squandered the bank's money leaving an entire community broke. Lee has spent the time since making sure Penny never hears what really happened and working to pay back her husband's debts. As thanks, Penny spends her days playing the same piano concertos her troubled father played for her when she was small. Her musical solace is Lee's ongoing punishment.

Lee has also spent that time denying her one true love, Chris Matthews (Walter Pidgeon, Mrs. Miniver). No, not that Chris Matthews, the blowhard news pundit, but rather an industrialist who was also Lee's husband's best friend. If only she had met him first! The night Addams committed suicide, Chris had taken Lee out so she could get away from the turmoil. This just adds to her sense of penance. The truth she's been denying will soon have to come to light, however, as Penny's therapist (Lionel Barrymore, It's a Wonderful Life), believes the only way for the girl to get healthy is to return to the farm by the sea where she lived with her dad. Lee agrees, but get's more than she bargained for. Chris still lives just up the road, and Penny is about to fall in love with him!

A tempest is brewing, that's to be sure. Leonard's movie is a light drama that pours a lot of armchair psychology into a vessel ill equipped to handle the extreme emotions. June Allyson proves a weak link when it comes to portraying the pouty child, possibly because she was already approaching 30 when she was cast as the 17-year-old Penny. The girlish dresses and pigtails can't hide her scratchy grown-up voice and older features. Given other performances in her career, Allyson could have likely handled the jealousy and anger, but she mistakenly takes a childish stamping-the-foot approach to convince us she's actually a teen. It's like Walter Pidgeon is being pursued by the Bad Seed.

The Secret Heart proves a much better role for Colbert, who does well as the concerned mother and middle-aged lover alike. Though the script by Whitfield Cook (Strangers on a Train) and Anne Morrison Chapin (The Sailor Takes a Wife) doesn't really toss her any challenges, her comfort as a screen presence carries through. In looser moments, she looks like she's having a lot of fun. Pidgeon can be a bit rigid, but somehow it works when they're both joking around.

Leonard's directorial style is pretty standard for 1940s studio work, with only the massive set and backdrop for the seaside cliff where the film's climax occurs really standing out. Still, The Secret Heart delivers on the romance and more than its fair share of melodrama, making for a decent enough viewing experience. 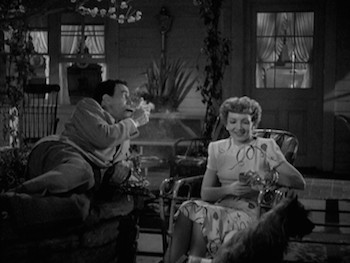 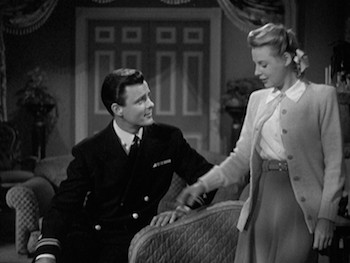 This manufacture-on-demand disc from the Warner Archive has a well-preserved full-frame black-and-white transfer. The image has fairly good resolution and though there are occasional marks or scratches, nothing too egregious. The darks and lights are maybe lacking a little contrast, looking slightly faded at times, but overall, it's a good-looking presentation with little to get upset about.

The mono soundtrack is also clear and nicely preserved, with no dropouts or unintended glitches.

Recommended. Though slight, The Secret Heart is an involving melodrama about a love triangle between a mother and her stepdaughter and the man the mother loves. Or men. Because the jealousy stems back to the girl's dead father. Claudette Colbert stars alongside June Allyson and Walter Pidgeon, and the veteran actress is definitely driving this star vehicle. She leads comfortably, at home in both the romance and the extreme emotions, which were old hat to her by this point. Which is good, as director Robert Z. Leonard is kind of a asleep at the wheel, leaving his actors to find their own way home. A nice diversion hailing from the mid-1940s, forgivable for its faults. 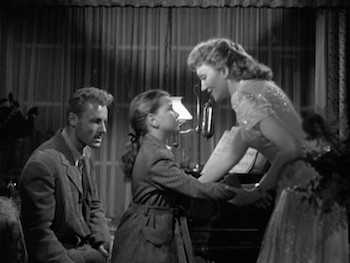 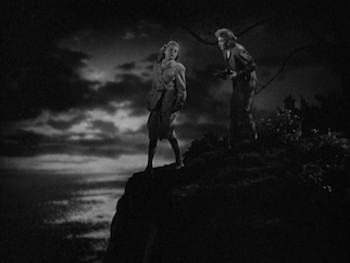