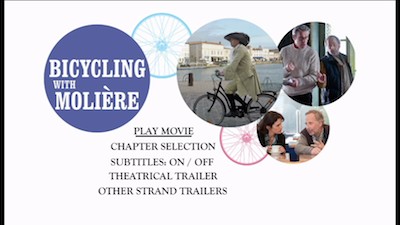 I've seen Bicycling with Moliere compared to both My Dinner with Andre and Before Midnight (and its prequels). These comparisons are apt. Perhaps more so when you mash them together. Because Philippe Le Guay's film is a little bit of both: an artistic conversation tangled in a romantic argument. Albeit a platonic one. Platonic in all senses.

Lambert Wilson (You Ain't Seen Nothing Yet) and Fabrice Luchini (Paris) star as Gauthier and Serge, two actors whose lives have taken different directions. While Gauthier has become a successful television star, Serge has retreated, disappearing to a seaside town where he lives simply on his own. Hoping to recapture a little bit of the original magic that led to his taking up the vocation, Gauthier tracks Serge down to ask him to co-star in a new stage production of Moliere's The Misanthrope. He has fond memories of spending time on set with Serge back in the day discussing the text. A simple request, it seems, with the biggest obstacle being that Serge has retired.

Except Gauthier sees himself as the lead, and Serge as the supporting player. His reasoning is sound, at least on the surface. Serge always argued that Philinte was the more crucial role, so why wouldn't he want to put that theory to the test? Easier said than done. Serge doesn't think Gauthier has what it takes to play Alceste.

A deal is struck. If Gauthier stays for the next several days and rehearses in Serge's house, Serge will consider the proposal of joining the production under Gauthier's own proviso that, week to week, they will swap roles, giving each the chance to play the lead and second fiddle in equal measure. 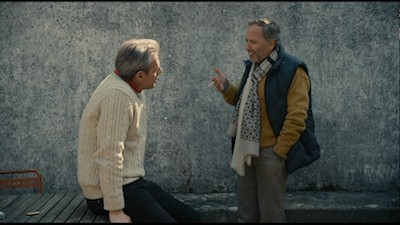 And this is the film. Louis Malle-like in its approach to portraying theater in cinema, Bicycling with Moliere alternates sessions of the two actors reading through The Misanthrope with their arguments about their different approaches to life and all manner of things in between. This includes encounters with the locals, most of whom recognize Gauthier from television. Many of these detours are designed to call into question the authenticity of each man. How legitimate is Gauthier's commitment to art? How sincere is Serge in his dealings with his old friend? And what has driven each man to this far outpost? Moliere aficionados will likely get more out of the way Le Guay positions his characters to question which one mirrors each of their assumed Misanthrope roles in real life--who is the real Philinte and the real Alceste--but even those of us who aren't overly versed in the text can puzzle out what it all means.

Wilson and Luchini are phenomenal together They have a winning rapport, and are believable as old friends, able to laugh at one moment and rage in another. Both men manage to sway viewer sympathy at different times, making neither the hero nor the villain, even if you do end up choosing sides in the end. (I'm not sure I actually did.) Le Guay makes sure to keep them down to earth, showing each suffering different indignities and humiliations, usually brought on by their own ego and self-involvement. Both men are extremely competitive; not just professionally, but also personally. It's gross watching them jockey for the attention of a would-be porn star (Laurie Bordesoules) less than half their age, and then sad when they do the same with a more age-appropriate divorcee (Maya Sansa, Good Morning, Night). She's the one who most succinctly calls them on their own crap. I'm kind of surprised she didn't notice how the two are kind of in love with one another. They are desperate for the other's approval.

Le Guay keeps things simple, utilizing the close quarters to maintain the appropriate intimacy and avoiding any distractions. There are no elaborate pans or extended zooms, the acrobatics are for the actors. And though there isn't really any sense that there's much improvisation going on, the naturalness of the conversation doesn't suffer for staying on book. It never ceases to amaze how riveting good conversation can be even when it's two other people having it. 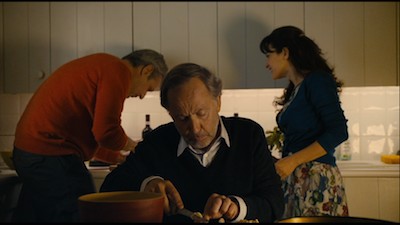 Video:
Strand's widescreen transfer for Bicycling with Moliere is exceptional. Colors are rich and vibrant, resolution is sharp, and there are no glitches or digital bogeymen to speak of. Really well done.

Sound:
The original French soundtrack is mastered in 5.1 surround sound and, despite being a fairly low-key conversation piece, the filmmakers manage to design a quality atmospheric audio experience. Small sounds work their way through the speakers to give a sense of the environment in which our main characters are engaging with one another.

The optional English subtitles are easy to read and keep up with.

Extras:
The film's trailer, as well as additional trailers from the distributor.

FINAL THOUGHTS:
Bicycling with Moliere is a pleasant treat. A smart and insightful human drama, it builds its narrative on two aging actors bickering over a possible production of Moliere's The Misanthrope. Fabrice Luchini and Lambert Wilson are superb in the main roles, creating complex characters who are always interesting to watch because they have plenty of interesting things to say. Philippe Le Guay (The Women on the Sixth Floor) never asserts his directorial presence, instead choosing to carve this tiny tale with an invisible hand. The results are Highly Recommended. 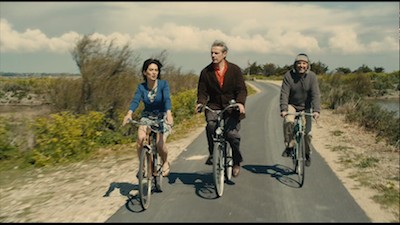