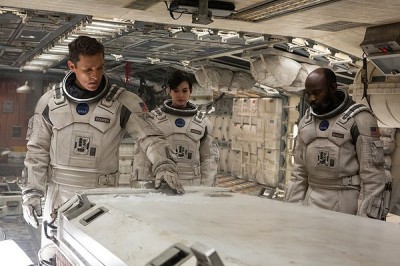 Interstellar is a whole lot of movie to take in. Clocking at nearly three hours, and featuring a fair amount of unsignaled left turns, there were points where I felt I was merely keeping up. Inception-mastermind Christopher Nolan, who is Interstellar's driving force, is clearly a fan of 2001, right down to its agitated classical music cues and inscrutable climax. While this new space odyssey may be more explicit in its explanations, that doesn't necessarily make some of its pretentions that much more clear. I feel I need another viewing. And a whole lot more time to think.

But press deadlines and opening dates prevail, and so an hour from Interstellar fading to black and barely more than twenty-five hours before I'm required to post this review, I find myself trying to distill my thoughts into some kind of coherent assessment of what is perhaps the most ambitious movie of this year and quite possibly several years on either side of it. Time is a flat circle, it moves from side to side, all right all right all right.

Matthew McConaughey continues his stellar run of smart choices and good projects playing Cooper, a grounded pilot in a not-too-distant future where climate change has caused the Earth's food supply to reach a record low. Cooper has a farm where he raises corn, one of the last crops to succumb to blight, and two kids, Tom and Murph (played as younger children by Timothée Chalamet and Mackenzie Foy, and as adults by Casey Affleck and Jessica Chastain). Cooper lost his wife some time back, and his farm struggles under ever-present dust clouds. The quiet life doesn't really suit him. He dreams of returning to the skies.

His opportunity comes after Cooper unexpectedly stumbles onto the seemingly abandoned base of operations for NASA, which turns out not to be abandoned at all. Behind its gates, a plan is underway to send a crew beyond the galaxy to look for a new place to live. The mission is being masterminded by Professor Brand (Michael Caine), Cooper's mentor. Brand invites the pilot to join his own daughter (Anne Hathaway) and two other scientists (Wes Bentley and David Gyasi) on their trek through the stars. With some reluctance, Cooper accepts, choosing to abandon his children for the sake of all mankind. 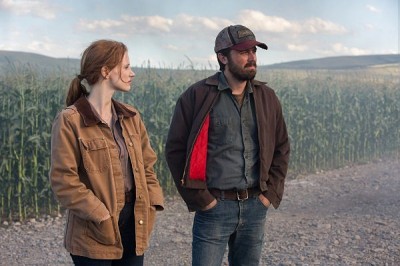 Naturally, the set-up is more complicated than that. There are some metaphysical elements and some practical physics and also some astounding cosmic happenings that will make the journey possible. Several daring explorers have already gone on ahead, and the new crew will endeavor to find them, collect their data, and transmit it back to Earth where hopefully Brand will have figured out a way to send the rest of the human population after them.

Even more naturally, the flight plan will be hard to stick to and things will go wrong, and the planets Cooper and his team will visit will have unexpected complications, the discovery of which is part of the mystery and the fun. Then there is also the matter of getting back, which is where the true trouble will begin and where some of the audience might lose a grip on what's happening. Likewise, there is this whole thing about the theory of relativity and so time on Earth is moving faster and viewers may be left to wonder what it all means in relation to the more amazing outer space story elements, but have faith, best beloved, these things matter.

There's a lot to like about Interstellar, and with time and perspective perhaps even more to love. There are top-notch performances from all of the cast, who do a lot to sell the more heady scientific concepts that Christopher Nolan and his co-writer/brother Jonathan have cooked up. There are beautiful space sequences, including lots of practical special effects using models and rear projection and sound (or a lack thereof) to create the illusion of intergalactic travel. There are also convincing distant worlds and wormholes and a black hole. And robots with hidden functions that will surprise and delight and become characters in their own right. There are also some whacked out connectors and hippy-dippy talk about love and the human consciousness and the interconnectedness of man, stuff that is as much Steven Spielberg as it is Stanley Kubrick and hey, have you rewatched A.I.: Artificial Intelligence recently because it's better than you remember.

Interstellar could quite possibly be as hotly a debated film as that one. Or as Prometheus. I am suspecting that Nolan's space epic will age as well as A.I., though, if not better, and...well, I'm sorry I even brought up Prometheus. The point is, it's not a film that's easy to dismiss, just as it may not be entirely easy to grasp, but the sheer force of Nolan's filmmaking and his dedication to his vision makes it worth grappling with all the philosophy and cosmic kookiness. Interstellar is the must-see event of the season, well worth seeking out in IMAX to see the director's incredible use of the ultra-wide screen, and likely worth setting aside the time to see again, to let it soak in, and to explore with an open mind. 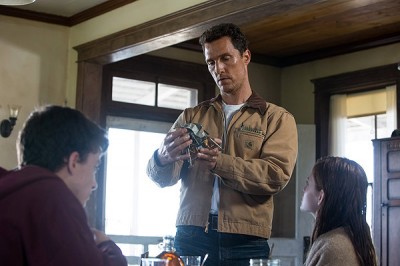