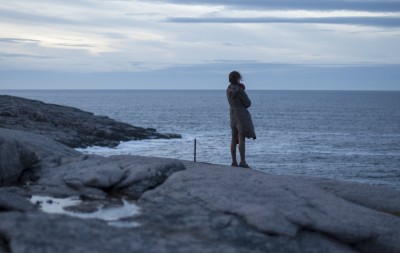 There can be an invisible beauty in the construction of a story. When a complicated tale is put together in just the right way so that all the pieces move in tandem, leading one to the other, each development feeling perfectly natural while also seeming impossible to predict what happens next--or, more importantly, so involving you never even think to stop and try.

Director Andrey Zvyagintsev (The Return) is in command of just that kind of storytelling skill. His new movie Leviathan has a large narrative, populated by many characters, but is also extremely intimate. The chararacters gravitate around each other and their shared terrain, acting unto their own motivations, but yet also having a specific function in the overall plot.

The crux of Leviathan is a piece of land and the house that sits on it. The land itself has been with one clan for generations. The current inhabitants are a family of three: Kolia (Aleksev Serebryakov), a former soldier with a rather intemperate personality; his adolescent son Roma; and Kolia's second wife, Lilya (Elena Lyadova, Elena). Kolia is in the final stages of a court battle to keep his land, which the town's power-hungry mayor, Vadim (Roman Madyanov), is looking to annex for unknown purposes. Coming to help is Kolia's old army buddy, Dmitry (Vladimir Vdovichenkov, 360), now a lawyer living in Moscow. He's got a dossier on Vadim that he thinks will help the family even if the court won't.

Which is a pretty succinct way to put something that is never described that succinctly in the film itself. Zvyagintsev is more concerned with letting his audience settle into the lives of his characters than he is the more conventional happenings of the script outline. He lets us discover who Dmitry is and why he's visiting Kolia and what Kolia is so angry about matter-of-factly, the way we might were we just casually observing. Or more to the point, if we were part of it, one of the group, immersed in the goings on. There is no need to tell us what it's all about, the unfolding of the action will do that for us. It's a clever trick--though not a trick at all, more a technique--that Zvyagintsev uses throughout Leviathan. He withholds information when it's effective, letting things happen away from our line of sight, showing us the reactions and the aftermath before sprinkling in details about what caused each kerfuffle. It allows him to gauge our involvement, to temper our allegiances, to stay engaged with everything that is happening. Seeing the bruised faces following a violent incident, for instance, without knowing the nature of the violence or how the others involved may have fared, makes the audience a certain kind of witness. Unreliable in a courtroom, but invested in terms of the humanity on display.

In this manner, all the characters likewise reveal themselves, their particular quirks and faults become clear through behavior rather than explained. Kolia's anger, Lilya's resentment, the mayor's petty power plays--these are all things lesser filmmakers would use to create types, with the added nuance of each person's fears and doubts serving as contrived traits rather than actual personalities. Again, this is what allows Zvyagintsev creations to act as their own engines, rather than as mere plot devices. Their cards are their own to play, and though some wagers take a while to pay off and some bluffs go on longer than expected, it's riveting to watch the game unfold.

Zvyagintsev choreographs it all with a patient hand. Scenes are given time to breathe, as are the participants. A quiet moment that doesn't push the plot forward exists for nuance, only to prove meaningful later. Stray comments prove revelatory. The remote Russian landscape dwarfs the actors, underlining just how tiny they are even while assimilating them as its own. For their part, the extraordinary ensemble brings a naturalness to each performance that disguises how finely tuned they are. The way Vdovichenkov pulls away from Madyanov, so that the clear-headed lawyer can dominate the drunken politician through false deference; the heavy glances Lyadova casts at her male counterparts; or the ways Serebryakov either unleashes or bottles his rage--the performers are nonchalant in their perfection. Likewise the script. Zvyagintsev only strays toward the heavy-handed when he brings religion into the mix. The title references the Bible, and there is a big scene involving the book of Job that is a bit Sunday School 101; yet, Zvyagintsev only lets that come up occasionally. In some cases, it seems like it's just local color; even in this, the true meaning being held in reserve.

The filmmaker does far better with external symbols. The skeleton of the whale on the dried-up shore contrasts amazingly with the image of a live whale barely visible, its back peeking out of the water. These brief glimpses prove to be fitting images for Leviathan as a whole: so much is laid bare and left exposed, and yet so much more hides beneath the surface.

The result is never ungainly, never too much to handle, a beast with as much power as the one it's named after, but absent of the domineering terror. Leviathan is a special film. Hopefully its Golden Globe win and Oscar nomination for Best Foreign Language Film will get as many eyes on it as possible. It deserves to be seen en masse.