With Avengers: Age of Ultron, phase two of the Marvel Cinematic Universe comes to a close. If we conveniently forget that Thor: The Dark World ever existed, phase two has been home to the best work Marvel had to offer so far, with Iron Man 3, Captain America: The Winter Soldier, and especially Guardians of the Galaxy making their mark on audiences and critics. It would have been a shame to end phase two with a subpar Avengers sequel. Thankfully, that's not the case here. 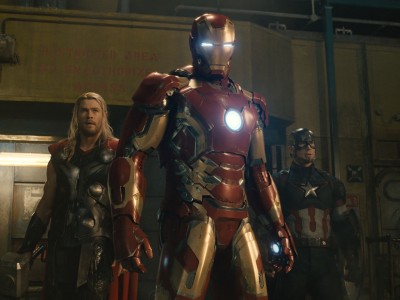 Avengers: Age of Ultron once again proves that the second installment of a superhero franchise is usually the best, or at least better than the first. The most obvious reason for this lies in the fact that second films don't have to spend as much time on origin stories and can let the characters and the action sequences breathe without the burden of having to bring the uninitiated up to speed. Of course, Avengers is a different beast since it's hard to call these movies stand-alone superhero flicks.

What we get is the Traveling Wilburys of superhero movies, a super band of heroes made up of characters who enjoyed their own highly successful movies in the past. And just like the Traveling Wilburys, The Avengers doesn't represent the best work of these superheroes, but constantly proves to be a good time nevertheless.

Perhaps because Whedon had to be more delicate about setting the Avengers up properly and because he hadn't undertaken such a giant budget blockbuster before, his trademark sarcastic and cynical approach wasn't as prevalent in the first movie. I guess being the writer/director of the third highest grossing flick of all time gave Whedon some confidence, so he lets his irreverent and snappy sense of humor loose in Avengers: Age of Ultron, and that's a very, very good match for the tone of an admittedly goofy franchise about a bunch of superheroes banding together to fight robot-like aliens or alien-like robots.

Whedon knows that we don't need to be reintroduced to the heroes in the sequel, so he opens his movie with an impressive action set piece showing the Avengers kicking mucho ass. A long sweeping take (Yes, I know it's a bunch of different shots seamlessly spliced together to make it look like a single take, but it's cool nevertheless) showing the entire team destroying the small remnants of Hydra starts things off with a bang and the rest of the movie's almost two and a half hour running time abides by the same breakneck pace and over-the-top ingenuity.

After The Avengers rescue Loki's scepter from Hydra, you'd think they could finally relax and enjoy a well-deserved vacation. Unfortunately that pesky troublemaker Tony Stark, who we know suffers from panic attacks about protecting the earth after the alien attack in the first movie, decides to use the unpredictable powers of the mysterious stone in the scepter to create his own Frankenstein's monster, an advanced form of AI that can protect the earth from the future alien invaders. I especially loved the references to the old Universal monster movies version of Frankenstein, including a clever nod to the 1931 classic's famous reanimation sequence. Who needs a rickety old lightning rod when you have Thor's hammer at your fingertips?

Unpredictably (Very predictably for us, unpredictably for the characters), the AI created by Stark and his reluctant partner Bruce Banner, an equally ruthless and snarky robot called Ultron (James Spader), decides that the only way for humans to be completely safe is for them to evolve. And in order for that to happen, they all have to die first. Ooops. Ultron eventually merges his consciousness with the Internet and Stark's army of autonomous Iron Man suits in order to turn into a catty version of The Borg. Of course the only force that can stop Ultron turns out to be The Avengers.

We all know that the impeccable technical reputation of the Marvel Cinematic Universe will create a lot of impressive action set pieces, especially when it comes to their ultimate tent pole Avengers franchise. So it's not a surprise that Avengers: Age of Ultron doesn't disappoint when it comes to pure wall-to-wall action. While the climactic fight on top of a makeshift asteroid gives the infamously long final battle in the last Hobbit movie a run for its money, the most thrilling action set piece actually comes up at the halfway point, as Iron Man tries to subdue a more-than-usually out of control Hulk with the fan favorite Hulkbuster armor.

Since Whedon doesn't have to worry about an origin story this time around, he can infuse more depth into characters that were relegated to the sidelines during the first movie. Yes, we're aware that the presence of a crack shot archer amongst a group of heroes with supernatural and highly enhanced powers is a bit ridiculous (Which Avengers: Age of Ultron milks for some clever self-referential jokes), but I'm glad that we finally see Hawkeye beyond his role as a glorified extra in the first movie. In Avengers: Age of Ultron, we get to know a lot about Clint Barton's personal life, as well as his inner conflicts surrounding his role in the team.

A surprisingly tender romance between Black Widow and Bruce Banner gives the sequel the kind of emotional heft that was missing from The Avengers. Of course we get some new additions to the team this time around, with "specials" (Marvel can't use the term mutants thanks to X-Men still being in the hands of 20th Century Fox) Scarlet Witch (Elizabeth Olsen) and Quicksilver (Aaron Taylor-Johnson).

Let's be honest, Marvel's track record with memorable villains has been less than impressive so far. That's why it was so refreshing to see a fascinating villain who could give The Avengers a run for their money. Ultron's genuinely threatening personality is perfectly balanced with his hilarious quips. In many ways, he works as an evil alter ego to Tony Stark. 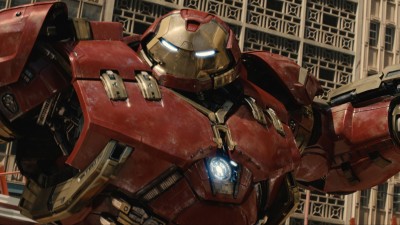 Predictably for such a blockbuster release, Avengers: Age of Ultron's 1080p transfer is pretty much perfect, with an incredibly clean and crisp presentation where all the bright colors pop, the contrast is impeccable, and there isn't a hint of video noise. This is demo-worthy material.

Speaking of demo-worthy, get ready for Avengers: Age of Ultron's DTS-HD 7.1 mix to rock your sound system. The sequel's bombastic and always-dynamic sound mix was a treat when I saw it in theatres, and the home audio transfer doesn't disappoint in the least bit. This is a very powerful, surround-heavy mix that will give your system quite a workout.

Audio Commentary by Joss Whedon: This is a treat. Whedon goes deep into the fun and frustration of helming such a huge blockbuster. This is a very informative and fun commentary and is very highly recommended to both Whedon and MCU fans.

From The Inside Out: This is a fairly standard 20-minute making of documentary that's a little bit more expansive than your usual EPK, with the cast and crew singing each other's praises. Considering Joss Whedon claimed that Avengers: Age of Ultron's production "broke him", I doubt every moment of the shoot was as much fun as this featurette makes it out to be.

The Infinite Six: This is a fairly standard informative featurette that uses more footage from the film than anything else. This feature explains the importance of the infinity stones to The Marvel Cinematic Universe.

Deleted/Extended Scenes: 12 minutes of deleted material. The film is already a bit bloated so these scenes prove to be that much more unnecessary. You get the option to watch them with Joss Whedon's commentary, which is recommended.

Gag Reel: Three minutes of the cast goofing off. It starts with a major spoiler, so watch at your own risk.

The Blu-ray I got came with a 3D disc. Unfortunately I don't have a 3D system so I couldn't sample it. All Blu-ray releases of Age of Ultron come with Digital HD download, and the film looks great on this format.

Breezy, exciting, and most importantly, fun, Avengers: Age of Ultron is not as impressive and original as a couple of other MCU Phase 2 films, but is a good time nevertheless. The A/V presentation on the Blu-ray is impeccable and anyone looking to show off their system should get their hands on it.