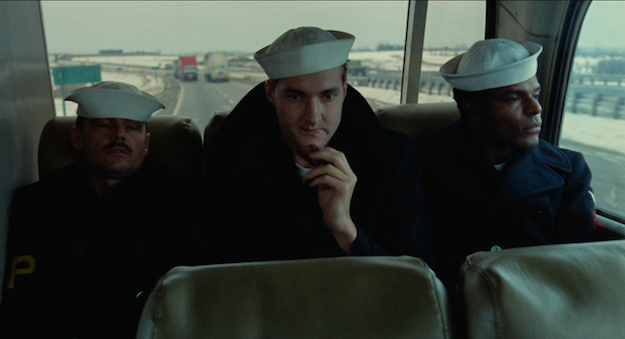 When it was released in 1973, one of the most notable things about The Last Detail was the way its characters talked. Anyone familiar with the phrase, "He swears like a sailor," would theoretically be prepared for the onslaught of f-bombs and assorted other curses that casually drop from the lips of the film's Navy men, but even to modern ears, the first few minutes of salty dialogue require some adjustment.

The men in question are Billy "Badass" Buddusky (Jack Nicholson) and Richard "Mule" Mulhall (Otis Young), two sailors sitting in Norfolk, Virginia, waiting for orders, when they get stuck with Shore Patrol duty, hauling a petty thief to Portsmouth Naval Prison in Maine. The thief is baby-faced hulk Larry Meadows (Randy Quaid), who is looking at eight years for attempting to steal a charity collection box with forty dollars in it.

Badass and Mule initially plan to get the trip done and over with, and then use their remaining per diem to enjoy themselves on the way home. But then they start feeling sorry for the kid. It turns out Meadows is sweet, mixed-up, and just happens to have a compulsion for shoplifting. Badass decides that Meadows deserves some final kicks before he turns over his prime years to some pissed-off Marine jailers, so they start acting less like captive and captors and more like buddies on leave.

This is quintessential Nicholson, with his character thumbing his nose at authority, trying to get this poor sap Meadows to live a little, while battling his own world-weariness. Otis Young is a nice, more grounded foil to Nicholson's wild man. Mule clearly feels like Badass, and likes to have a good time, but as a black petty officer, he is more reticent to get his ass in a sling if something goes wrong with this assignment. Quaid, meanwhile, plays a well-meaning lummox like few other actors of his generation; he brings a shy sadness to Meadows that makes the character's fate downright heartbreaking.

Director Hal Ashby (Harold and Maude, Coming Home) got his start as an editor, and the most quietly transformative section of the whole film owes itself to some well-executed jump-cuts. Having missed one of their connecting trains, the three men hole up in a hotel room and drink enough Schlitz and PBR to fell a horse. For the next nine-to-ten minutes of screen time, we watch as the sailors talk and laugh and get on each other's nerves. Badass teaches Meadows the hand positions of flag sempahore, and soon he goads the young man into punching him (Meadows sheepishly declines). The jump cuts take us deeper and deeper into the drunken night, as the men connect and bond. Since the script by Robert Towne (Chinatown) keeps tight-lipped about the characters' backstories for the most part, this sequence gives the rest of this low-key adventure some palpable emotional stakes.

Highlights of their escapades include a brawl with some Marines in a bus station bathroom, a drop-in on a group of white Buddhists praying (including a briefly glimpsed Gilda Radner), some misfired attempts to pick some lovely young ladies (including a wonderfully bemused Nancy Allen), and a trip to a brothel, where Meadows attempts to lose his virginity with a young Carol Kane.

As unsentimental and downbeat as The Last Detail's plot tends to be, the whole film lingers in the memory -- much like Cuckoo's Nest -- as a tribute to the fire and spark humans possess but tend to tamp down. There is evidence in the storytelling that Mule is right when he suggests that sowing all these wild oats before Meadows is locked up will just make the near-decade behind bars more unbearable for the guy. But the film also makes a strong case that none of us should go down without a fight. That's a big part of why The Last Detail is so quietly powerful to this day. 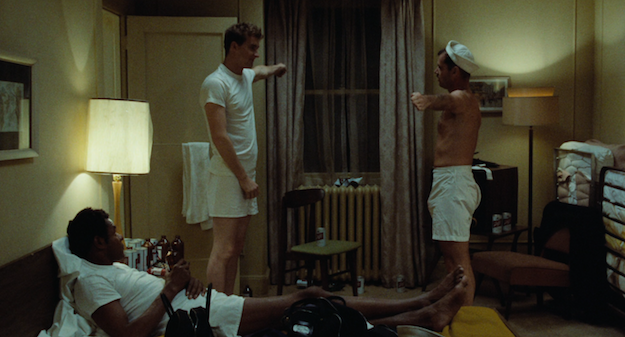 The Blu-ray
The Last Detail arrives on Blu-ray in a limited edition of 3000 copies. The disc is packaged with a small color booklet featuring liner notes by Julie Kirgo.

The Video:
Sony has consistently provided top-notch transfers to Twilight Time, and this AVC-encoded 1080p 1.85:1 presentation is no exception. Sporting an intentionally grainy, murky look, the cinematography by Michael Chapman (Taxi Driver) nonetheless impresses with its high contrast and deep, heavy blacks. Otherwise, the image is clean and stable, with consistent film grain structure.

The Audio:
There has also been an excellent remastering of the DTS-HD MA mono audio track, which reveals no damage or distortion. The sound is unsurprisingly narrow, but it is always clear and understandable, and the ambience is sometimes interestingly layered.

Final Thoughts:
An essential film from the New Hollywood of the 1970s offers Jack Nicholson in one of his signature roles, ably abetted by a reluctant Otis Young and a sweetly goofy Randy Quaid. This Blu-ray offers a tasty upgrade in the A/V department, though it comes up short in the extras. Nonetheless, this disc comes Highly Recommended. 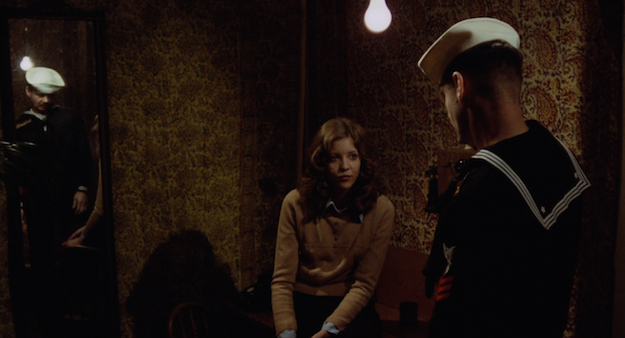