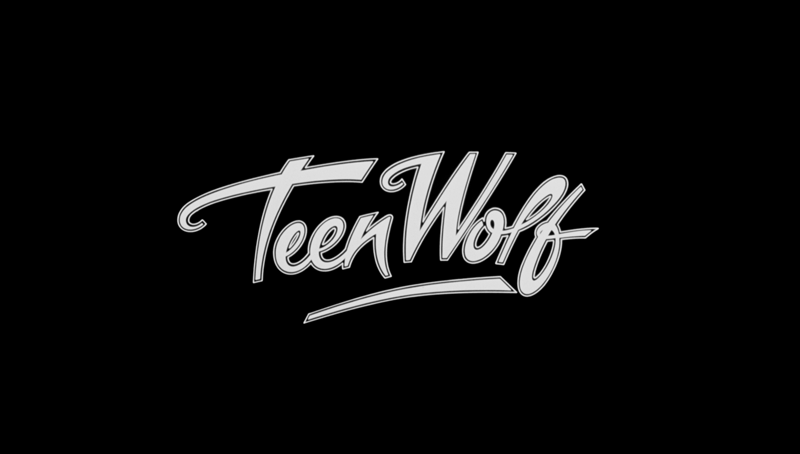 
The Movie
Most people remember Michael J. Fox as a movie star in the Back to the Future trilogy, and for good reason, as they are, as a whole, some of the best entertainment ‘80s film had to offer. But in that decade, Fox had another tremendous movie on his resume, and it wasn't Bright Lights, Big City. Teen Wolf, written by future comics superstar Jeph Loeb and Matthew Weisman, and directed by sitcom veteran Rod Daniel, bended a teen coming-of-age story with a sports film and filled it with comedy, with the presence of a werewolf differentiating the movie from the rest of the pack.

Of course, the element that really set Teen Wolf apart from most other comedies of the time was having Fox in the lead role. Shot before his career-defining spin in a time-traveling deLorean, but released soon after, it served as further proof that Fox was a capital-S Star, as his boyish charm and vulnerability are balanced by a natural ease with comedy. As Scott Howard, a Nebraskan kid who suddenly can become a werewolf, he is completely believable in an unbelieveable part, struggling to make sense of the supernatural transition he's making, while dealing with regular teen problems, particularly his infatuation with pretty, blonde Pamela, all while his lifelong friend, the adorable brunette Boof (Susan Ursitti) is right there in front of him. And when he embraces his unique nature, Scott is the kind of part Fox could shine in, a confident smart-alec with a mischievous twinkle in his eye.

There's not a great deal of plot to work through in Teen Wolf, with the main conflict being Scott's Betty-or-Veronica choice between Pamela and Boof and the problems that arise when Scott becomes popular as a basketball-playing werewolf, and doesn't want to go back to being the guy his friends and family once knew. As a result, there's not a lot of new ground being broken here, even if the werewolf factor freshens things up considerably. It still feels like a lot of other ‘80s teen romantic comedies and inspirational sports films. But that's OK. When you're telling these kinds of tales well, especially when you're doing it with a terrific cast, you don't always need to tell an entirely unique story. 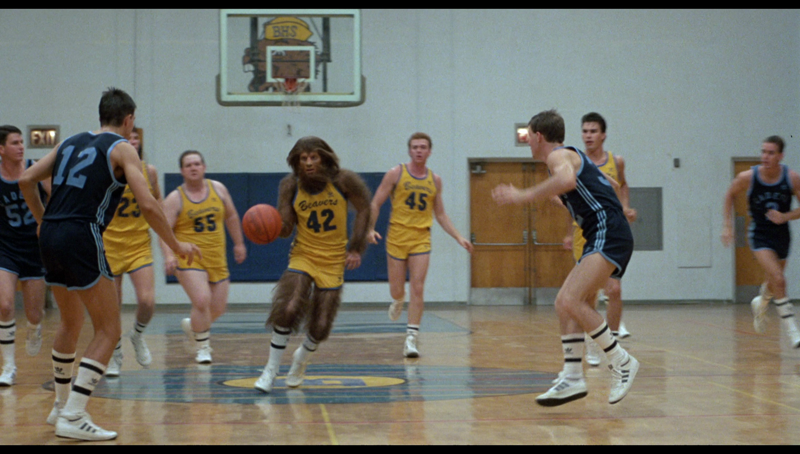 Remarkably for a film with the word Wolf in the title, Scott's status as a werewolf is a pretty minor post of the movie, with the townspeople accepting his more hirsute form quite readily (though one particularly dark moment makes it clear that not everyone is into the idea of a werewolf.) As such, his transformation gets limited focus (though the special effects are rather well done for the time) and the drama that would come with needing to keep his lycanthropy secret is short-lived, traded for the drama of whether Scott will do the right thing for his friends and teammates. It makes sense, since the movie is really more about interpersonal relationships (between Scott and his dad and Scott and his friends), and him being a werewolf is a visceral metaphor for the changes that come with young adulthood, which also allows for some fun wolfed-out bits.

Besides Fox and Ursitti (who, with her assertive girl-next-door Performance, joins Michelle Meyrink in the underappreciated ‘80s crush pantheon), Teen Wolf is loaded with great performances, including all-time-great movie dad James Hampton (featured in perhaps the film's best moment), Jerry Levine's delightfully scheming best-friend Stiles and the great Jay Tarses, who, in his only-ever film role, gives Walter Matthau competition in the realm of great bad coaches. And it would be a shame to not recognize Mark Arnold, who is perfect as the film's bad guy, the kind of sneering jerk that owned the ‘80s. Even a small role like Lewis (Matt Adler), seemingly the only person in town weirded out by the presence of a werewolf, is memorably portrayed.

An important part of what makes Teen Wolf such a part of the ‘80s canon is the music, which is uniformly great and mostly original to the film, whether it's the on-the-nose "Big Bad Wolf" during the big dance, the Warren Zevon-meets-Randy Newman "Way to Go", the synthtastic, montage-backing "Win in the End" or the pitch-perfect final ballad "Shooting for the Moon". Throw in the Beach Boys' "Surfin' U.S.A." and it's a musical mix that sets the mood perfectly, without relying on songs that already have emotions tied to them, an impressive feat for a time when just about every song is loaded with personal connections. 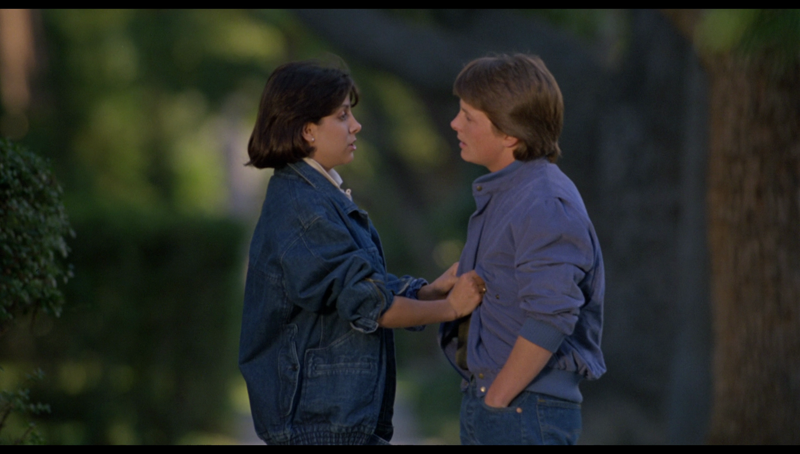 The Disc
Teen Wolf, previously released in 2011 on a bare-bones Blu-ray from MGM and as part of a double-feature DVD in 2002, now arrives in a standard Blu-ray keepcase with reversible cover art that features an attractive new painting (which pairs with Scream Factory's release of Teen Wolf Too) or the original Fox-focused poster art (while the slipcover repeats the new painted art.) The Blu-ray features a static menu sporting the same cover art (backed by a loop of the song "Big Bad Wolf") with options to watch the film, adjust languages, select scenes and check out the extras. There are no audio options, while subtitles are available in English.

The Quality
The 1.85:1, AVC-encoded 1080p transfer, struck from a new 2K scan, is rather gorgeous compared to previous releases, with plenty of fine detail, solid contrast and well-saturated color that makes the movie look far better than the film's age and pedigree might make you expect. Black levels are sufficiently deep, and the layer of grain is strong and stable, making for a pleasing image. There are no notable problems with dirt and damage (though some jitter is present at times) and digital distractions are not a concern.

A 2.0 DTS-HD Master Audio track does the trick when it comes to delivering the film's dialogue and music, while the strong sound effects and atmospheric sound enjoy an appropriate separation from the other aural elements. Voices are easily understood in the mix, though ADR voices are very clear as well, and stand out a bit too much. Music gets correct priority when present, with lots of heft when it's supposed to stand out.

The Extras
Seeing just one main extra included was a bit disappointing, but when you realize that that one extra, Never. Say. Die. The Story of "Teen Wolf" is actually a 10-part, 143-minute, in-depth exploration of the film, you feel a lot better about the bonus content. Unfortunately, Fox is nowhere to be found, having long-ago disavowed the film, while director Rod Daniel only appears in some archival clips, having passed away last year. Fortunately most of the remaining main cast and crew, including Ursitti, Levine, Loeb and Weisman, are around to share their memories and reflect on the film, along with a clinical psychologist and film critic, who provide important external perspectives. The documentary touches on every major element of the film, from the writing and development to the effects, editing and music, providing an all-encompassing look back at the film, with tons of interesting trivia (including the many connections to Back to the Future) and even discussion of the infamous rogue genitalia rumor (aided by a look at the open-matte scan of the film.) If there's something about Teen Wolf that isn't covered here, it probably doesn't matter.

Also available is a 6:13 auto-play stills gallery, which starts off strong with alternate poster art (including some international versions) and key art, but settles into an array of stills, behind-the-scenes set photos and some effects images. Better included than not, but it's of limited value.

Wrapping things up is the film's theatrical trailer (1:51), which reveals much of the plot and sells the film on Fox's brand. 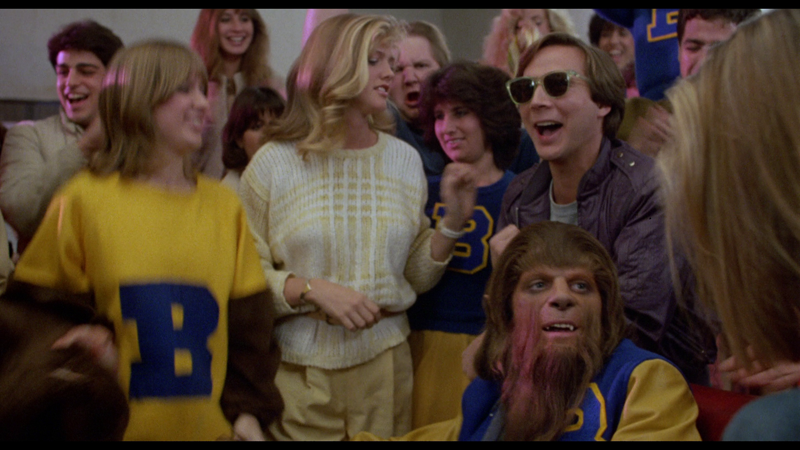 The Bottom Line
Mushing together several genres, Teen Wolf is everything that's great about ‘80s movies--a wonderfully uncomplicated bit of fun with a cast of likeable characters that's powered by obvious heart and an excellent soundtrack. Lessons are learned, laughs are had and the good guys come out on top, with the effortlessly-charming Fox leading the way, backed by a top-notch crew of supporting actors. Scream Factory has done a great job giving this underrated film a great presentation, and paired it with the kind of comprehensive, informative bonus content any fan would hope for. Francis Rizzo III is a native Long Islander, where he works in academia. In his spare time, he enjoys watching hockey, writing and spending time with his wife, daughter and puppy.Follow him on Twitter