BCI Eclipse // R // January 8, 2008
List Price: $22.98 [Buy now and save at Amazon]
Review by Stuart Galbraith IV | posted June 21, 2008 | E-mail the Author
In a most welcome move, BCI has been quick to upgrade several of their Japanese action and European horror DVDs to Blu-ray format, and at bargain prices yet. This is particularly good news for fans of Japanese action films. BCI's double feature disc of Killing Machine and Shogun's Ninja retails for $22.98 but many online sights are selling it for around $15. That's an incredible deal when you consider neither film is presently available on Blu-ray in Japan, and there even the standard DVD of Killing Machine - without English subtitles - retails for more than twice the cost of both films together on BCI's Blu-ray. With Japan and the United States now in the same Blu-ray region (as opposed to standard DVD, which put them in regions 2 and 1, respectively), it will be interesting to see whether Japanese consumers start buying cheaper U.S.-manufactured Blu-ray discs of Japanese movies, or if companies like Toho and Toei will start insisting upon crippling licensing restrictions that will curb the flow of Japanese titles into the U.S. market.

In any case, BCI's first release of Sonny Chiba titles is something of an oddity; one suspects high-def masters were conveniently available rather than a deliberate decision was made to specifically release these particular Chiba offerings first. They're not really the best showcase for the action movie icon but they are colorful entertainments, if awfully silly at times. Both were directed by Norifumi Suzuki, one of Toei's typically prolific, workmanlike but not unimaginative helmers. The Blu-ray presentations are okay but not outstanding. More on this below. 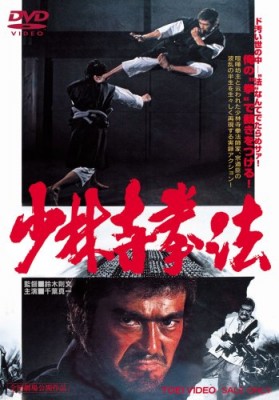 (Note: My comments on The Killing Machine appeared previously in a slightly different form in my review of Lethal Chiba.) During the 1970s Toei Studios, a socially conservative company reportedly with ties to organized crime, frequently cast gaijin (foreigners) as comic book-level villains of convenience. Sometimes, as with director Kinji Fukasaku's Battles without Honor and Humanity series, this was done to make a political statement, but in the case of The Killing Machine (Shorinji kenpo, 1975), an action-melodrama starring Shinichi "Sonny" Chiba, the anti-foreigner racism is both overt and occasionally hilarious.

The story's focal point is Doshin So (Chiba), a Shaolin master and Japanese Secret Service agent in Manchuria who single-handedly tries to restore honor to postwar Japan, its theme made plain in a compliment paid him by a police chief (Tetsuro Tamba) who says, "As long as Japan has you, there's hope."

A one-man army who takes out a platoon of Chinese in the opening reel, Chiba's So beats up Korean thugs, unapologetic American G.I.s who nearly kill a small boy with their Jeep in a hit-and-run accident, and Japanese yakuza whose dance club caters to American soldiers openly making out with unfortunate Japanese girls. In perhaps the film's most blatant if slyly dramatized bit of racism, a subplot finds war veteran Otaki (Makoto Sato), who lives like a "ghost" after being officially reported dead, learning that his missing wife has remarried - to a Korean. Though he admits to his wife that the new husband seems to be a "good man" the implication is clear: in the wake of Japan's humiliating surrender, Otaki is forced to swallow the bitterest pill of all. It's like a Grand Dragon in the KKK learning his teenage daughter has run off with Ice-T.

In the years following Japan's defeat, So recruits a veritable loyal forty-seven of disciples, including Otaki, another disgruntled veteran, Tomoda (Naoya Makoto, of Tsuburaya Productions' "Fireman" series), and his kid sister, Miho (Etsuko "Sue" Shihomi, the Sister Streetfighter herself). So, meanwhile, cares for a young woman (Yutaka Nakajima, in a good performance, quite a different role from her Executioner movies) raped by Russians in Manchuria, and her brood of orphans, whom for a time So had played a Fagin-like role.

Racism aside, the film is undeniably compelling and delivers the goods in terms of violent action. Most outrageous is a wish-fulfillment revenge scene where So castrates the rapist of a young girl, tossing the dismembered organ aside where a stray dog looking for a meal happily takes away. 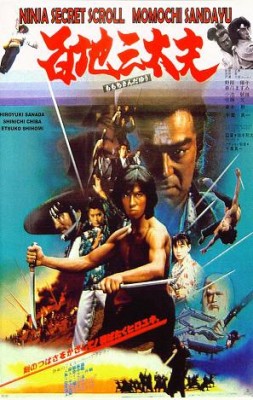 Power-mad Shiranui (Chiba, channeling Tomisaburo Wakayama here) and his seemingly inexhaustible ninja army, in a pact with Sengoku period daimyo Hideyoshi Toyotomi (Asao Koike), betrays and wipes out the Momochi Clan - but clan heir Takamaru, a little boy at the time, is secretly smuggled to China along with a sword containing one-half of a map leading to the clan's secret gold mine. Ten years later, Takamaru (now played by Sanada) returns to Kyoto to restore his family's honor. Assisting Takamaru in his mission is a loyal retainer Yatoji (Makoto Sato) and his Spider Ninja; Airen (Etsuko "Sue" Shihomi), an ass-kickin' daughter of a Chinese Shaolin master; and Otsu ("New Face" actress Yuki Ninagawa, in her film debut), a flute-playing virgin actually in league with her violent adopted brother Hanzo Hattori (Isao Natsuyagi), who's only interested in the gold.

Though back in the 1960s Hong Kong's filmmakers were turning to Japan's yakuza and chanbara films for inspiration, by 1980 it's pretty clear that the trend had reversed itself. As with all of Toei and Kadokawa's jidai-geki and chanbara of the period, Shogun's Ninja looks less like the '50s and '60s work of Hiroshi Inagaki, Daisuke Ito, and Tomu Uchida than it resembles a Shaw Brothers martial arts extravaganza. Older generation types like Akira Kurosawa and Toshiro Mifune, famous for their insistence upon detailed historical fidelity, probably blanched at the fast-and-loose approach taken on films like this.

Sanada, beefed-up considerably since his Toei-Television days just a few years before this, in early scenes fights shirtless with Chinese-style slacks and sandals - all of which seem a deliberate and shameless attempt by the filmmakers to emulate Bruce Lee. In one typically bizarre sequence, mourning his murdered comrades Takamaru does this strange martial arts tribute that with the poor underscoring suggests Bruce Lee disco dancing. To his credit, Sanada is excellent in the action set-pieces. In one clever scene, when Takamaru is imprisoned and hanging upside-down by his ankles, his hands tied behind his back, he affects his escape by swinging his entire body toward a lit candle, finally grasping it in his teeth, which he then uses to burn the ropes binding him.

Taken as action-fantasy rather than historical melodrama, Shogun's Ninja has lots of goofy fun to offer. Exemplifying this entertaining ludicrousness is a white-haired martial arts master, Tozawa, played by Tetsuro Tamba. (Mild Spoilers) He's such a dedicated teacher, Tozawa praises Takamaru for instinctively fatally stabbing him, then calmly continues to dispense words of wisdom for what seems like five minutes (C'mon, die already!) as the blood drains from his body.

Significantly, in addition to his "guest star" billing Chiba gets an additional credit as "stunt director," the title card prominently positioned immediately before Suzuki's. This type of billing, essentially identifying Chiba as a co-director, was rare; for years only special effects director Eiji Tsuburaya was regularly awarded this special billing in a live-action Japanese film.

It's justified. As with Tsuburaya's miniatures, Chiba's stunt direction fills huge swaths of the picture, much of it involving wireworks among the treetops a la myriad Hong Kong martial arts movies. Sanada, Chiba, and Shihomi are in the thick of it, doing most (all?) of their own stunts.

The score, attributed to "Buster" (Basutaa) is unbelievably bad, appropriate perhaps as muzak one might hear while riding an elevator at the Holiday Inn in Tulsa, but definitely not for a Japanese period action film.

Both Killing Machine and Shogun's Ninja were Toeiscope productions, Toei Studios' equivalent to anamorphic Panavision, and in Fujicolor. The 2.40:1, 1080p image on both films, authored on one single-sided Blu-ray 25 disc, is okay but not the revelation some older 'scope titles have been on Blu-ray and HD DVD. Having watched these and the Panavision-lensed Battle of Britain one after the other there's really no comparison: Battle of Britain is many times sharper than the two Japanese titles. Why that is I have no idea. Maybe the original negatives of the Japanese films weren't sourced, maybe Toei's 'scope lenses produce an all-around softer focus, perhaps it's the result of decisions made during the remastering process - Who knows? Both films look better than BCI's standard DVD versions, though this is noticeable less in terms of the sharpness of the image than the solidity of the color. Pools of blood, the texture of a kimono, the font of the main titles, etc, look more natural, more film-like and less video-y.

The Dolby Digital Japanese mono is more than adequate, and far superior to the English-dubbed tracks available on both titles. The English-dubbed tracks, probably produced in Japan by Frontier Enterprises, are typical of the period. The audio on these is flatter and the sound on Shogun's Ninja actually threatens to drop out for more than a minute at 1:37 and 1:43 marks. The subtitles are clear but somewhat distracting, in white font surrounded by a thin black-line border. They're easy to read but obtrusive, like trying to watch a movie with a neon sign at the bottom of the picture. The menu screens are available "pop-up" style during the feature: there are no Extra Features.

For the money this is quite a nice set, though if you already own the standard DVD releases - both reissued at least once as part of boxed sets by BCI as I recall - there's no great hurry to upgrade as the difference in picture/audio quality is modest. However, if you don't have even one of the two titles it's a real bargain and Recommended.